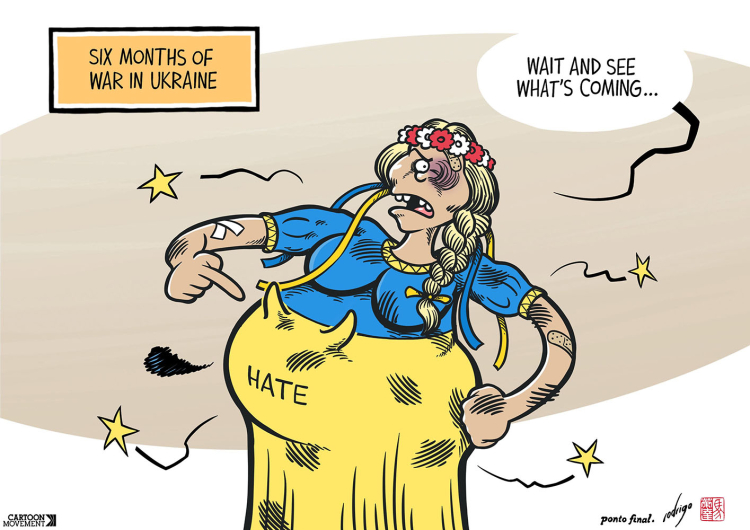 This cartoon by Portuguese cartoonist Rodrigo de Matos, which ran on our homepage last week, stirred up some controversy and even made one of our Ukrainian cartoonists decide to leave Cartoon Movement. Many people consider it to be offensive to Ukraine. Although I concede in retrospect the cartoon might not be our best editor's choice of the year, I do feel the need to explain why we chose it and why I feel it is a valid selection.

First of all, a bit of context: six months have passed since Russia invaded Ukraine and interest in the war in Ukraine is slowly receding. After hundreds, if not thousands of photos and cartoons about the violence and atrocities taking place, people are getting desensitized.

Our aim with the daily editor's choice is to make people think about what's happening in the world. Since the start of the invasion, we published many cartoons that protest the war, Putin's unprovoked bloodshed and the horrors of war as they are inflicted on the Ukrainian people. But as the war continues, these cartoons are less and less effective, as people get used to them. To continue to keep the war top-of-mind, we need to find new perspectives. With Rodrigo's cartoon, we thought we did.

Then onto the cartoon itself, the imagery that Rodrigo chose to use, and our interpretation of it. In the image we see a woman who is a symbol for Ukraine. She is battered and bruised, and pregnant as well. She is a victim of Russian aggression. The baby in her belly is 'hate' as we gather from the word written there. Two horns protruding make it clear that hate is evil. Since Russia forcefully invaded Ukraine, we could conclude the woman is a victim of rape.

The imagery is sharp. But sharp imagery is what cartoons often employ to jolt people into thinking about the subject at hand. In this case, Rodrigo wants us to consider the consequence of the war. Ukraine has been brutally raped, and the (logical) result is hate. The analogy of rape and a resulting child is effective, because the consequence (hate) will be long-lasting. Even after the war ends, it will probably take decades for Ukrainians and Russians to reestablish something approaching friendly relations.

This is a prospective we had not seen in a cartoon yet, and that's why we decided to make it an editor's choice. Yes, the imagery is uncomfortable, but that is sometimes needed to effectively address an issue.

I do understand that people get upset about the image, especially Ukrainians. It's not nice to see your country portrayed as a victim of rape. But in this case we felt the chosen symbols were legitimate given the point the cartoon is trying to make. We might have been wrong (although I continue to think it's a valid cartoon) and we'll probably make our share of controversial editor's choices in the future. When dealing with editorial cartoons, this is bound to happen from time to time.

Well done. The cartoon is very strong and your explanation is cristal clear.
I agree 100% with your choise and your points.
For me, this cartoon is in NO WAY against Ukrainian people.
K.

Problem, those who draw cartoons about Ukraine or Israel do not know what is really happening there. Drawings based on propaganda from the media cannot be objective, which is why they hurt people who real live there and understand the true picture.