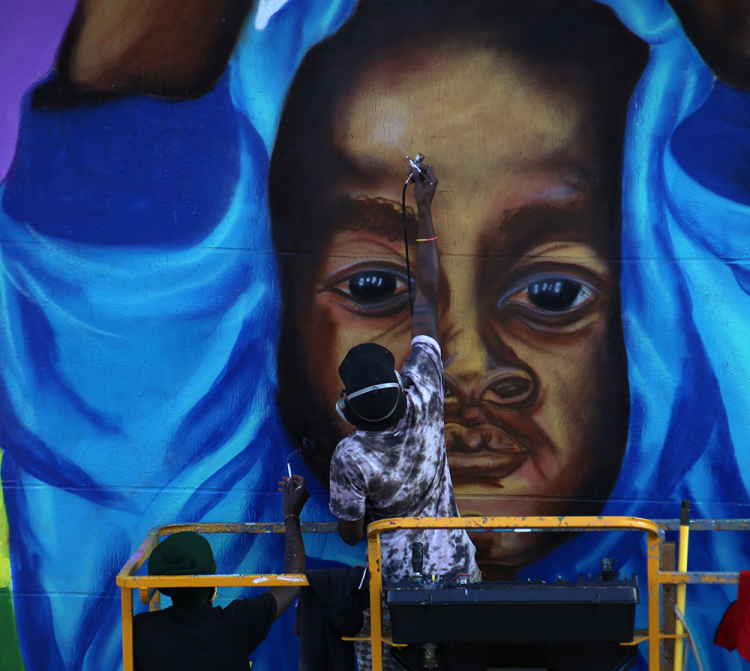 In a unique project that is a first for Cartoon Movement, we were asked to create a mural in downtown Johannesburg, South Africa. Although many of you will have followed along with the project through our regular social media updates, we feel the need to document this story on our blog as well. So here you will find a day-to-day report of how the mural came to life, accompanied by many photos.

Working with our sister site The Next Movement, the Embassy of the Netherlands in South Africa, the City of Johannesburg and the Johannesburg Inner City Partnership (JICP), we decided the mural design should be based on what young South Africans think of the future. The catch of the project was that we needed to pull the whole thing off in just two months, with just a week to be on site to create the mural.

With the help of SAIIA Youth, we scrambled to organize two workshops for young people, to hear their ideas and to teach them how to capture these ideas into a cartoon. Next, we asked our cartoonists to pick the best ideas and turn these into professional cartoons (they only had a couple of days to do so). You can see all the submissions here.

While this was going on, we also needed to pick a wall. The JICP had compiled a list of potential candidates. The side wall of the Downtown Music Hub became the preferred choice, both in size and location. The DMH is a 90-year old recording studio that has hosted musicians like U2 and Paul Simon (not to mention a long list of legendary African artists). Its side-wall is four stories high; and it's located in a rough part of town, but near an area that has been renovated recently. Plans are to extend the renovation, and a mural would fit right in with giving the neighborhood a much-needed upgrade. 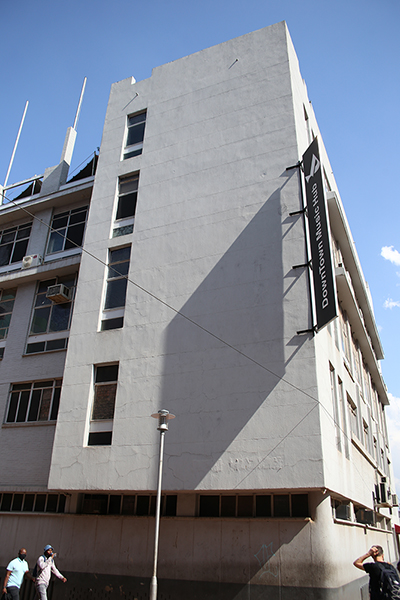 The wall picked, it was time to vote for the winning design. All the partners agreed that the mural should convey a message of hope for the future. And most agreed that the sketch by Zaheer Sooliman captured this message. Zaheer states that we might not be able to change the past, but we can start the change now. Cuban cartoonist Osval turned his sketch into a beautiful cartoon, capturing our hope for the future not only in the extended hands, but also by adding the earth surrounded by a loading sign. Change might not be here yet, but it's on the way. 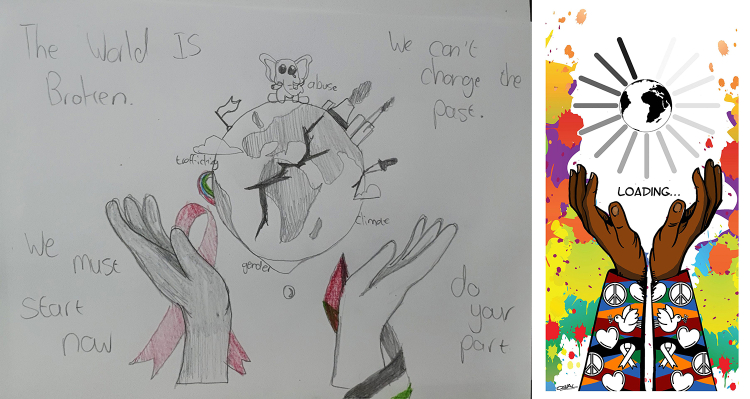 The wall and the design were now sorted, so we could get the mural underway. Through coincidence we got into contact with street artist Ras Silas Motse (one of our partners literally met him on the street in Cape Town), and his experience and style seemed a great fit for this project. In addition, his studio had recently burned down, so he could use a new project. Early on we decided to give Ras some creative freedom with the final design. He wanted to extend Osval's cartoon by painting a full figure with hands raised. Since human figures are Ras' specialty, we were quick to agree.

The day before we were scheduled to start working on the mural, there was some stress about the delivery of the cherry picker, which was absolutely essential given the fact that we were going to paint a very tall wall. But arriving at 9am, the cherry picker was there and we could start as scheduled. The first step was preparing the wall, scraping it down and repairing any cracks. 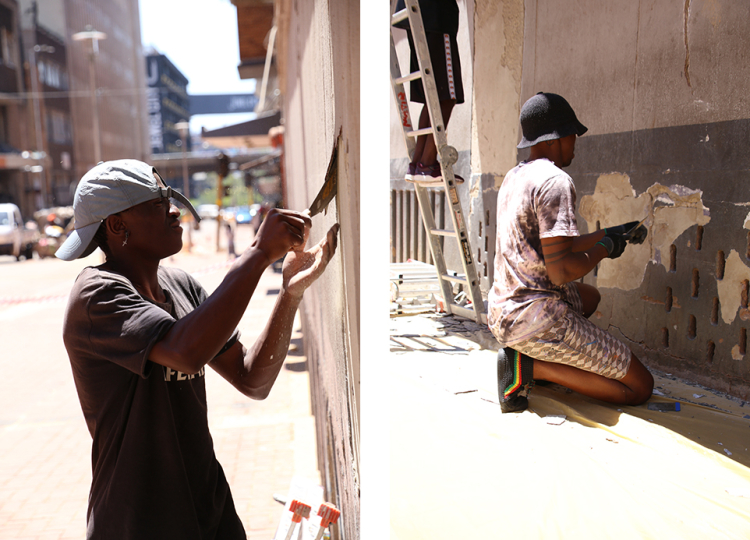 Next, our artist Ras went up to cover the wall in what he calls 'doodles', a process that helps him to determine the proportions of the figure on the wall. For him the doodles work like a sort of grid, telling him where and what size arms legs and head will need to be, to be in proportion. He also made a start of the geometric design that will feature on the lowest part of the wall. One of the coolest things that happened was a girl that came up to us to see what we were doing; she had seen us from the balcony of her house nearby. She joined in to paint a little bit of the artwork! 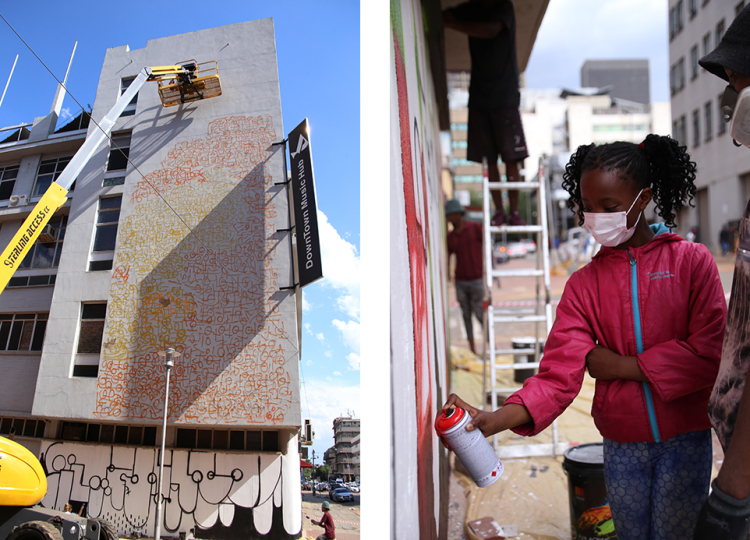 Ras started out really early today, hoping to finish the outline of the figure and to start with the geometric shapes that would surround the it. 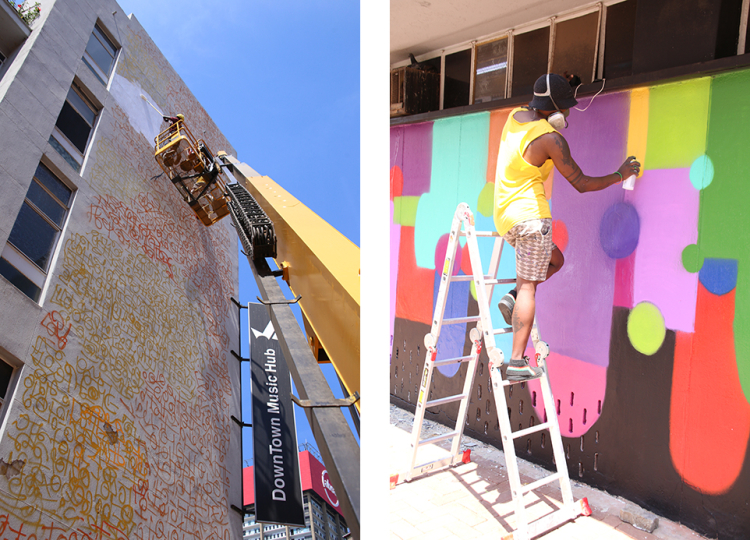 Unfortunately, a zealous official of the Johannes Road Agency happened to drive by, and decided to throw his weight around. If we did not have a permit, the cherry picker was not allow to be used in the road. We had to stop work immediately, or risk having our cherry picker towed away.

In a project where the City of Johannesburg is one of the sponsors, nobody involved thought that a special permit was necessary. Moreover, the cherry picker took no more space that two parked cars, so other traffic could pass by quite easily. Frustratingly, this was a Sunday, meaning that we had to wait until Monday to sort it out. Until then, we had to pack away the paint and park our cherry picker. 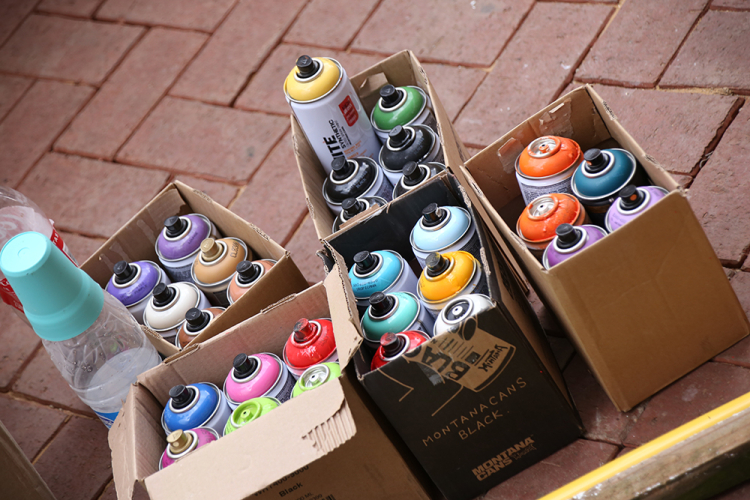 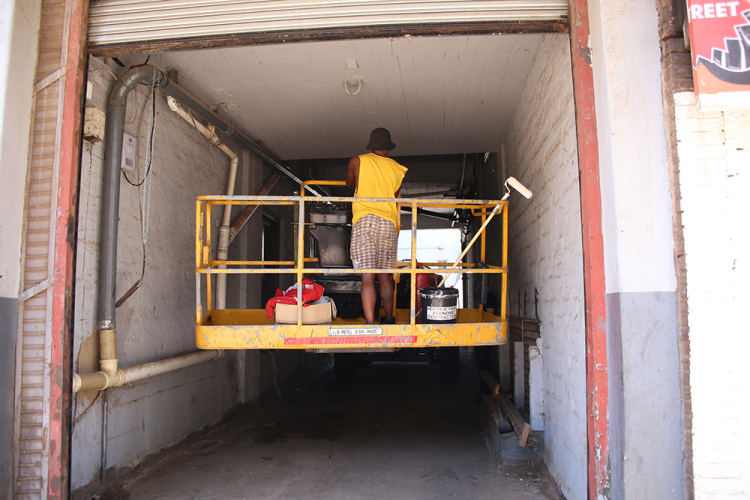 After scrambling to get the necessary documents and delivering them to the JRA, we were good to go! Except...it had started to rain. Painting an artwork on a wall when it's pouring isn't really an option. So again, we had to wait. From the initial five days we had to complete the mural, it now looked like two were lost. We would have to work really hard to finish in time.

Towards the end of the afternoon, the rain finally stopped, and we could start again. Working until after dark, Ras managed to finish the bottom part of the African geometry. 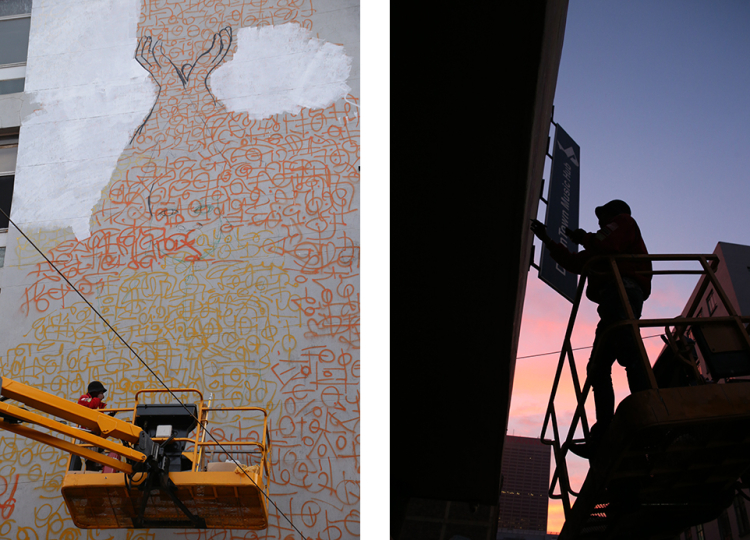 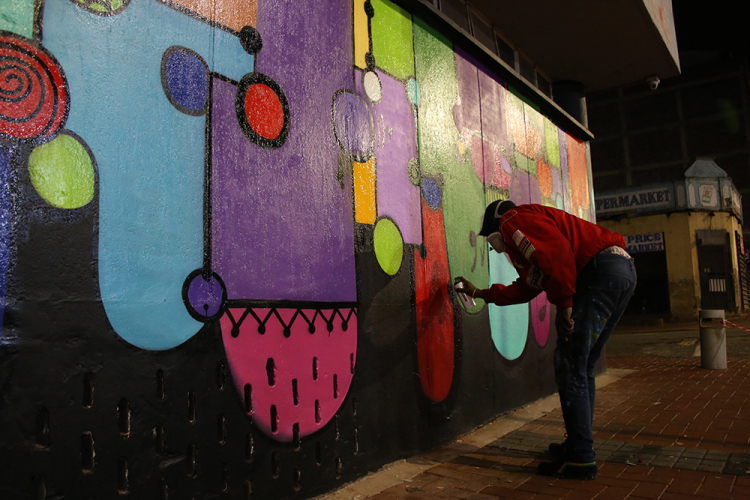 Another early start for Ras, on the penultimate day of painting (if we were to finish by end-of-day on Wednesday). The sketch outline was finished, and after that Ras started filling in the colors. Sounds simple, but with a wall four stories high, this is actually quite challenge. 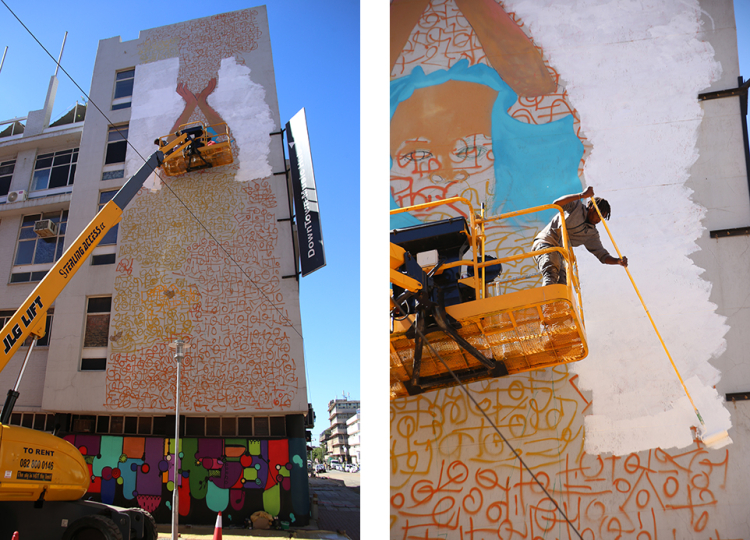 A lot of time is spent on creating shading and detail, bringing the figure, and especially the face, to life. The first layer of details is done with spray paint, followed by even finer detail applied with the airbrush. The background is also mapped out, with Ras adding blocks of color in the first stage of creating the geometry. This pattern, and the color used, are not planned, but created spontaneously. 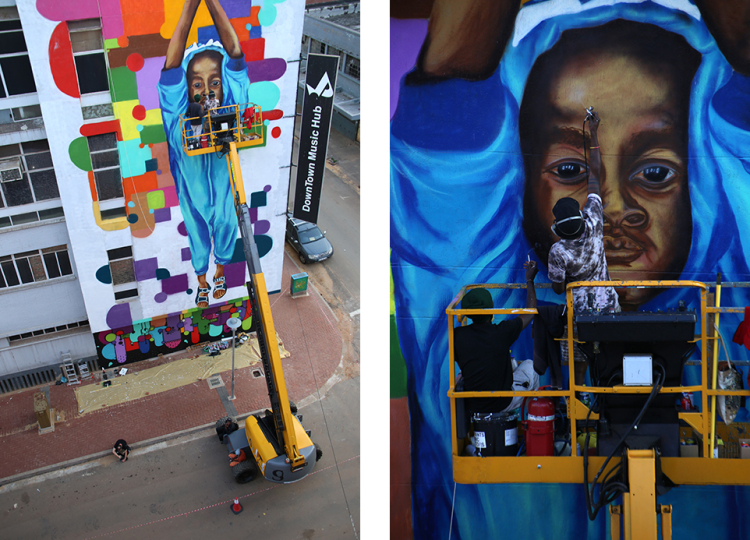 Ras used all the available daylight to finish the figure. After that he still had to finish the entire background of African geometry, not to mention the globe on top. To finish everything, Ras worked until 4.30am to get it all done.

Thursday at 9am, the mural was unveiled by none other than legendary South African cartoonist Zapiro, in the presence of all the partners. It was absolutely great to see everyone responding with awe to what Ras had created. 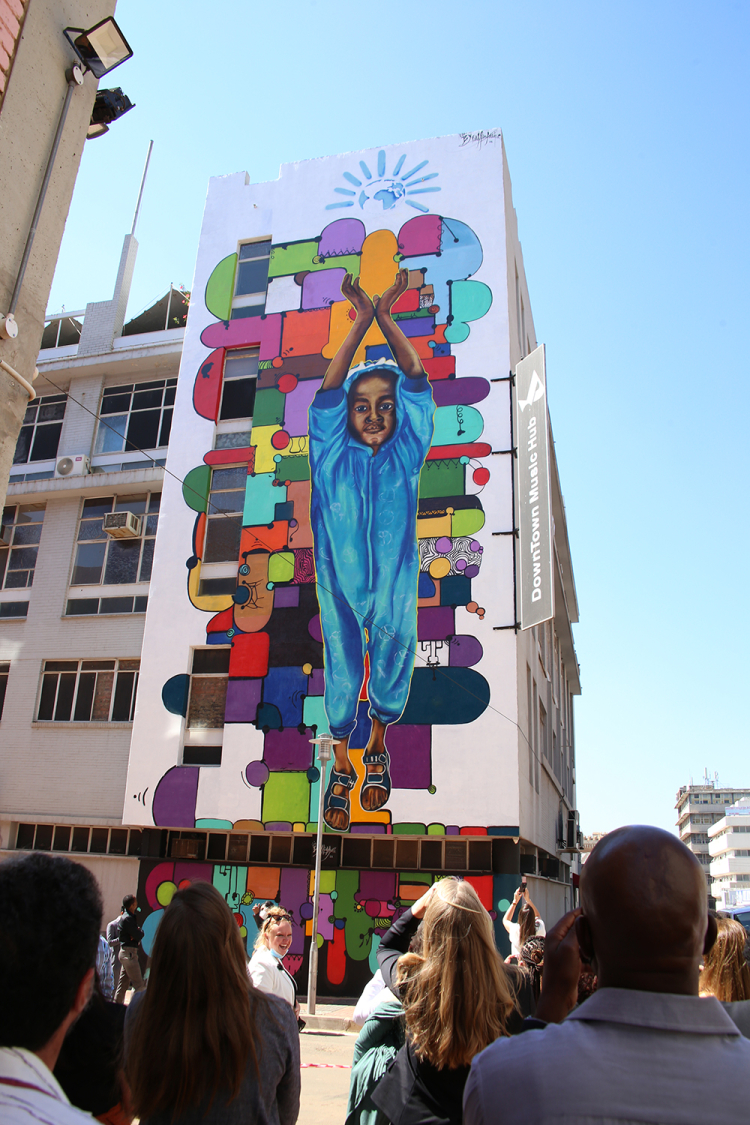 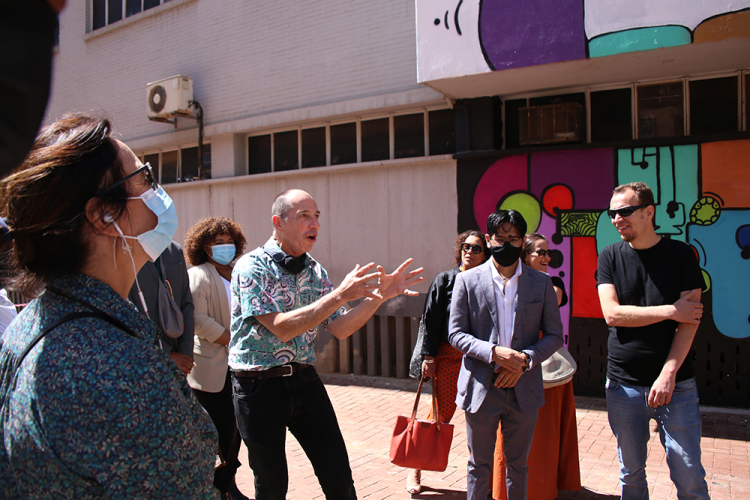 We hope and expect it will grace the wall of the Downtown Music Hub for decades to come, inspiring those who walk by to aspire to a better future. 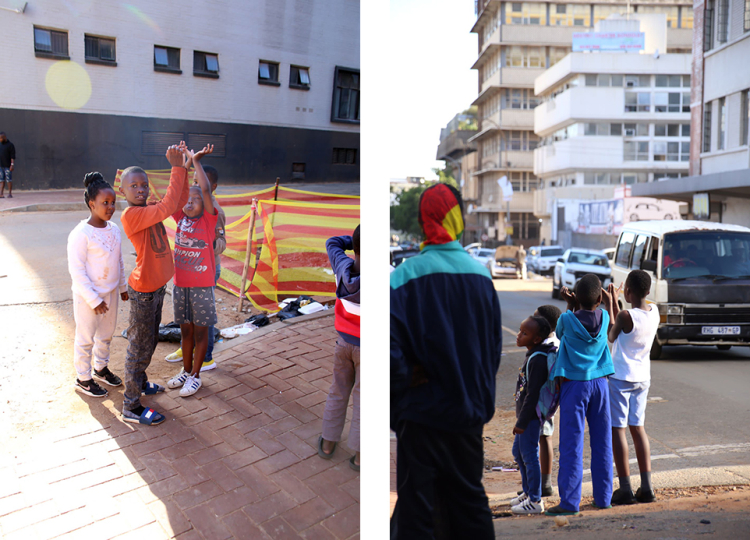 If you are interested in seeing more, you can view the recording of the event that took place after the unveiling, where we talk to the young people who came up with ideas for the mural; also, special guest Zapiro tells about his work and the trouble that it caused him.

All photos by Marjolein Klare.