The divide in society between those who choose to get vaccinated and those who decline to get jabbed can be found among cartoonists as well (check our editorial from August). This month, two cartoonists in the vaccine skeptic group were fired from their publications. In one instance, I think the firing was legitimate; in the other case, I'm not so sure.

Let's start with what I think is a legitimate dismissal: UK cartoonist Bob Moran has been fired from his position at The Telegraph. Moran has been a notable critic of the UK's strategy to deal with the pandemic, the Covid vaccine and generally accepted science about corona in general. In response to our position on anti-vax cartoons, he tweeted that Cartoon Movement had positioned itself on the wrong side of history. Here an example of his work:

Moran was not fired because of the cartoons he drew, but because he used Twitter to attack an NHS doctor over Covid-19 policy, stating: 'She deserves to be verbally abused in public for the rest of her worthless existence. They all do.' He later issued an apology, but his actions deeply concerned not only the Telegraph, but many other media outlets and professionals as well. He was suspended and later let go by the Telegraph.

Moran's firing was a legitimate response, I think, because cartoonists have a responsibility not only for what they draw, but also how they conduct themselves in the public debate. As a cartoonist, especially one publishing in a major newspaper, you have a privileged position to make yourself heard. With this privilege comes responsibility, also outside of the cartoons you do for that particular publication. How much responsibility is up for debate, as we shall see when discussing the next case. But using your privileged position as a media professional to threaten other people clearly crosses a line, and must have consequences.

The second cartoonist fired this month hails from Australia. Michael Leunig was fired from his position at The Age for a cartoon he made that was published on his social media accounts. In the cartoon, he compares resistance to vaccine mandates in Victoria to the bloody Tiananmen Square massacre. After the cartoon appeared in social media, he received a call from his editor, informing him that his services were no longer required, because he was out of touch with the readership of The Age. According to Leunig, the editor told him: 'this type of cartoon is not in line with public sentiment, and The Age’s readership.' He responded: 'But my job is to challenge the status quo, and that has always been the job of the cartoonist.' 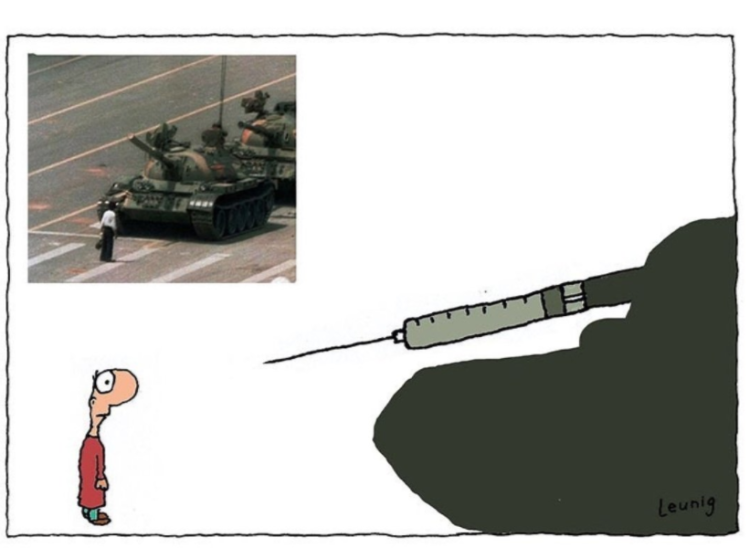 To be clear, I don't agree with Leunig's cartoon. But he has a point when he says his job is to challenge people. Furthermore, although I find the comparison with China's oppressive regime tasteless, the cartoon is not hateful or intimidating in any way. Additionally, it wasn't even published in The Age. Perhaps the editors of The Age were looking for an excuse to get rid of Leunig (who had been working there for five decades), but doing so because he made a cartoon that your readers disagreed with seems like a poor one indeed.

Cartoonists have a responsibility, and as such can and should face consequences when they cross a line in the pulbic debate. On the other hand (and I've said this before), the default response seems to be to fire the cartoonists when he or she makes a mistake (or does anything that's not in line with the editor's wishes). In some cases, such as with Bob Moran, this response is legitimate, but in many others it's not, at least in my opinion.

I would even say that dismissal is necessary, not legal or illegal! There are innocent conspiracy theories, such as the idea that the earth is flat, or some other nonsense. And there are those, that literally kill people! Why would an editor continue to work with someone who calls for mass murder? In my opinion, we are even too tolerant to vaccine skeptics!

Well put, Tjeerd. I tend to agree, although think that Leunig’s dismissal is less of a case where a one-off cartoon prompted his firing: it has to do with a general trend over the past decade or two of Leunig making comments that are really off-target. His likening of Israeli policy to Nazi policy was an early one; his white male shaming of mothers with smart phones another; and now this. It seems more a case of - as you say - moving on someone who has outstayed his welcome.