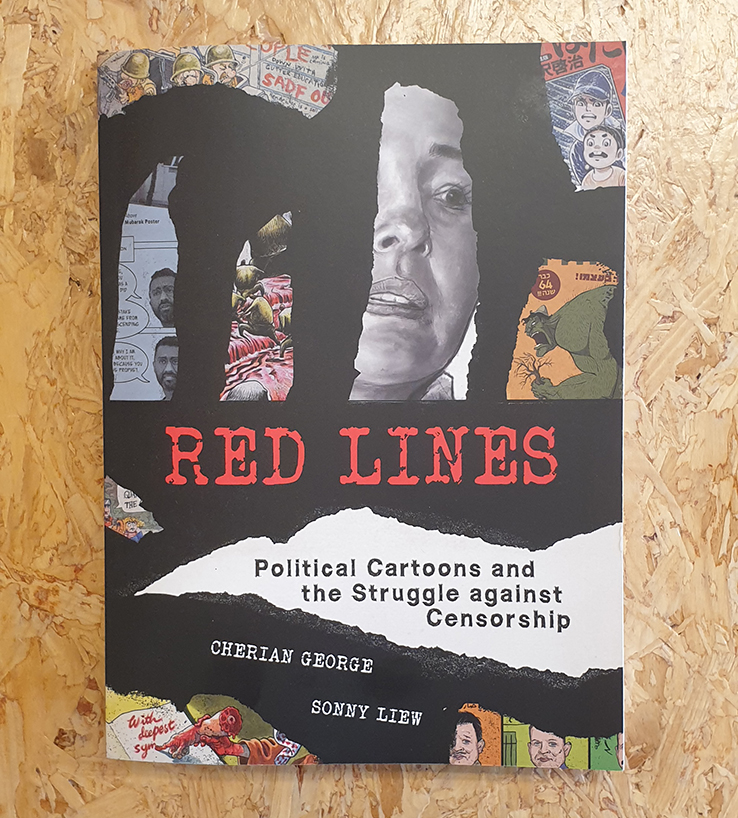 The number of (international or English) books that deal with political cartoons are few and far between. We did our last in-depth book review in 2016, on a book about comics journalism. Either we have missed some titles - unlikely, as we keep a sharp eye on anything and everything related to editorial cartoons - or there's just not that much being written about cartoons. All the more reason to give some attention to the upcoming publication Red Lines by Cherian George and Sonny Liew. This 448-page behemoth not only gives a broad and comprehensive overview of all forms of censorship, it does so in style, as the authors opted to present their book as a graphic narrative.

And it couldn't have come at a better time. The number of functioning democracies around the world is dwindling, and press freedom is caught in the wake of this trend towards authoritarianism. At the time of writing, the Taliban have taken over Afghanistan and I know of at least two cartoonists that are desperately trying to flee the new (and likely) oppressive regime. The author of the book, Cherian George, is a Professor of Media Studies at Hong Kong University; based in Hong Kong, he himself is witnessing the potential collapse of democracy first-hand.

The book gives a thorough account of cases where cartoonists have been harassed, threatened and murdered for the drawings they made, most frequently at the hand of oppressive regimes or extremist (religious) groups. But the book has a scope beyond the censorship of violent dictatorships. It promises a 'grand tour of censorship', looking at cases of censorship all over the world. The book was over three years in the making, during which time Cherian George traveled across the globe to interview over 60 cartoonists about their experiences with different forms of censorship. 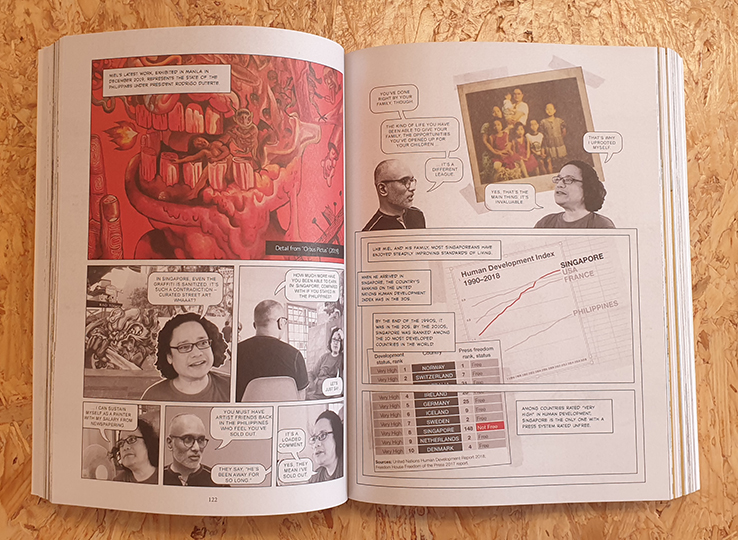 The scope is, I think, the biggest achievement of the book. George effective shows that violent censorship is actually a small percentage of all cases of censorship. In our interconnected world, total censorship isn't practical anymore for oppressive regimes, so most have opted for new strategies of soft censorship (George calls this 'Post-Orwellian strategies'). These strategies include discrediting the cartoonist or threatening to punish (by either removing funding or access to government) the publication in which the cartoon appeared. He then moves on to market censorship, showing how capitalist forces have both decreased the possibility for cartoonists to publish their work and get payment for it and pressure cartoonists to draw or not draw about certain topics. In addition, the book also deals specifically with censorship on the internet, gender-based censorship and censorship in wartime (taking a look at the political climate for cartoons in the aftermath of 9-11).

One of the most scary things for cartoonists is that you often cannot predict what cartoon will get you in trouble. Most cartoonists are familiar with the red lines of the country and society they live and work in, and adhere to these when drawing cartoons, but that does not prevent from sparking controversy by accident. An Iranian cartoonist drew a cockroach for the children's supplement of a government newspaper, and ends up being accused of targeting an ethnic minority. A Venezuelan cartoonist draws a gag cartoon of a rat funeral two weeks before a politician is assassinated, but the cartoon is published after this murder (the magazine was already at the printer at the time of the murder): controversy and accusations ensue, forcing the cartoonist to leave the country.

A lot of attention is of course devoted to the attack on Charlie Hebdo. Over six years after the attack, the book not only provides historical context for the attack, with a thorough account of Charlie Hebdo's track record of controversial cartoons and various lawsuits before January 2015, but it also opens a frank discussion on where and how the cartoons that Charlie Hebdo publishes fit in with press freedom. Immediately following the 2015 attack, it was almost impossible to condemn the attack while also being critical of the Charlie Hebdo cartoons. George does not shy away from this question, giving equal attention to defenders of Charlie Hebdo cartoons and to people that argue that the anti-Islam cartoons targeted an already stigmatized and discriminated group, French muslims.

This, perhaps much-needed, discussion of the Charlie Hebdo cartoons is preceded by a chapter in which cartoonists talk about how they 'censor' themselves to avoid perpetuating negative stereotypes and offending people for the wrong reason. Because political satire isn't about offending just because you can; it's about using satire, which definitely includes the right to offend, to hold those in power accountable and expose their wrongs. But, to use a cliche, cartoonists should always punch up, not down. And there is nothing wrong with a degree of self-scrutiny to make sure the imagery and symbols you use as a cartoonist mock those that should be mocked without collateral damage. 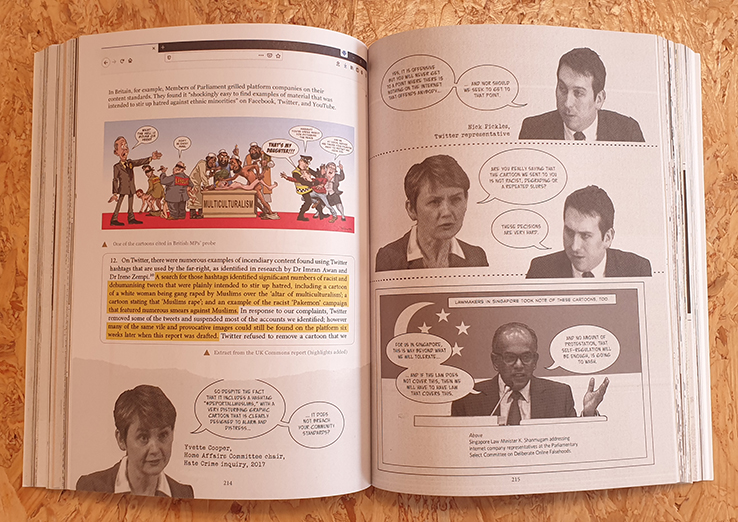 I cannot review this book without saying something about the form. The graphic narrative is designed by Sonny Liew, an Eisner Award-winning cartoonist and illustrator. Presenting the narrative as kind of a graphic novel not only sets the tone and atmosphere of the different chapters, it makes the narrative engaging and accessible.. For those who find reading a book of close to 450-pages challenging, I can promise the graphic novel approach makes all the difference.

So, all positives. If I would have to mention something negative, it would be that I was familiar with the majority of the cases being dealt with by the author. This is to be expected, as I deal with cartoonists from around the world on a daily basis, and keep a keen eye on cartoonists getting in trouble. If you are either an internationally oriented cartoonist or a well-informed cartoon aficionado, this book might not hold much secrets for you. That said, I did discover some new cases, and, perhaps more importantly, I did gain new insights along the way. In conclusion, I would recommend this title to anyone with an interest in political satire.

The book is on sale August 31st. More info here.