Editorial: our position on anti-vax cartoons

On such example is the genocide of the Rohingya in Myanmar in 2017. While the overwhelming majority of our cartoonists chose to call out the atrocities committed by the Myanmar army, our contingent of cartoonists from Myanmar defended their government and army, stating that the accusations of genocide were fake news. In light of the evidence, we chose not to highlight these perspectives. That doesn’t mean these cartoons are censored; it simply means we will not publish them on our homepage or post them on our social media channels. 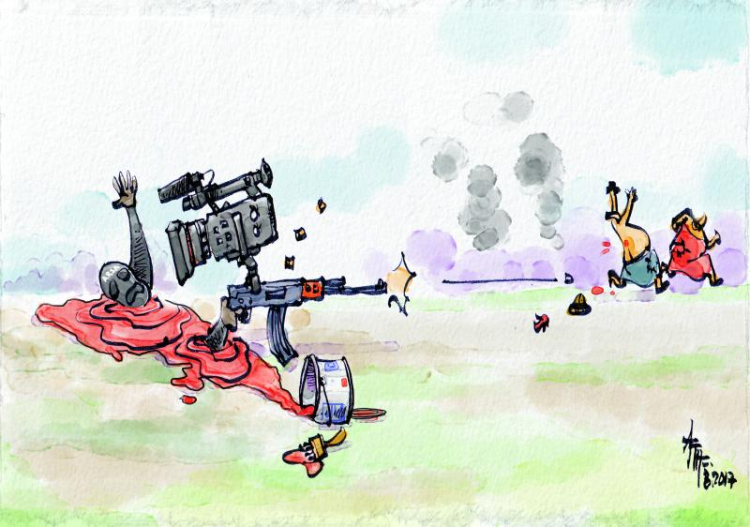 Cartoon by Aung Thein Htike ATH from 2017, with the perspective that the suffering of the Royangya was fake news.

We have made the same editorial decision for cartoons that speak out against vaccination. In light of the evidence about the effectiveness of the vaccination, we will not publish cartoons that ignore this evidence and feed into the various conspiracy theories out there about the supposedly nefarious intentions of researchers and governments alike. We do show a couple of them here, to illustrate our decision. If you want to see how most cartoonists think about the vaccine and the anti-vax movement, check our collections here and here. 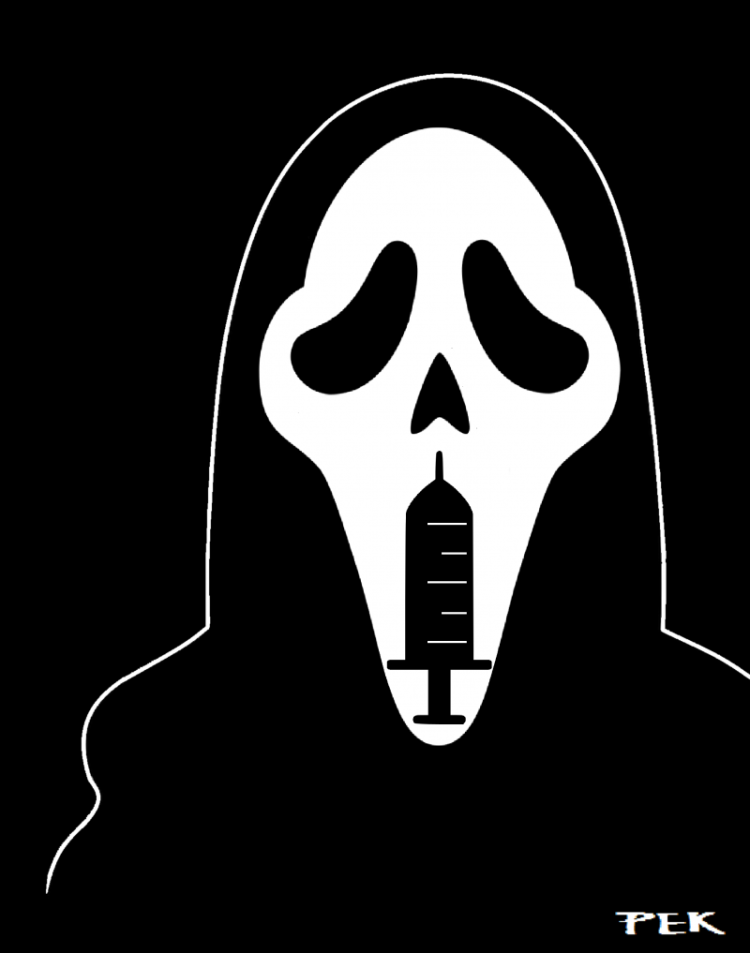 A portrait of Anthony Fauci, by Elchicotriste

With all editorial decisions, there will be grey areas. Not publishing anti-vax cartoons is a clear-cut decision, but what about cartoons about the position and rights of the unvaccinated in society? For instance, Swaha takes a more nuanced approach with her cartoon questioning the French Covid passport as a way to return to a free society.

A citizen in a free society is only free to the extent that his or her freedom doesn't harm the freedom of others; the problem with unvaccinated is that they consciously make a decision that is potentially harmful for the rest of society. On the other hand, one could argue that no state should have the power to coerce people to inject something into their body, and that granting privileges to one group over the other is coercion of a sort. 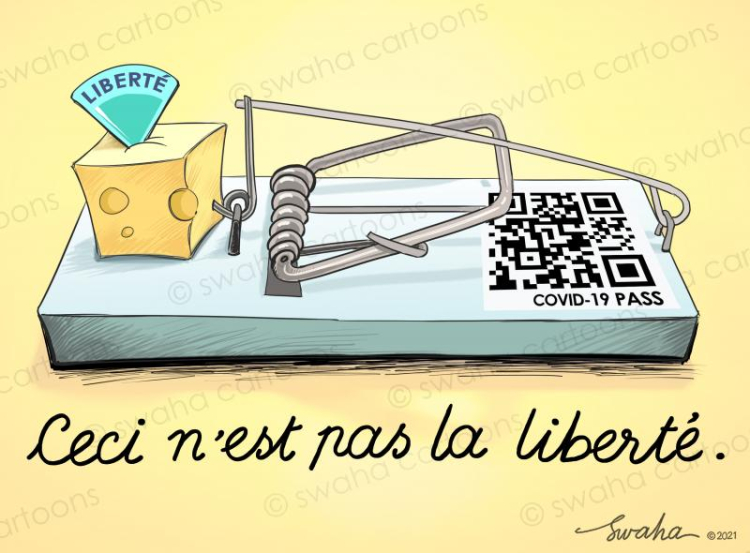 We will not change our editorial stance on the anti-vax movement (barring new scientific evidence), but we will closely be looking at the way societies and governments deal with the unvaccinated, and the cartoons that are made about this.

P.S. This editorial has been edited slightly on August 9 after receiving feedback from SWAHA, to better reflect the intention of her cartoon.

What 'evidence about the effectiveness of vaccination' is this? We need to see something more compelling than the classic 'just look at how the numbers of deaths and hospital admissions have plummeted'. Post hoc te proct, dear boy, as Derek and Clive once said. If you recall, deaths and hospital admissions were extremely low last summer, too, when there was no vaccine. Could it possibly be that waves are caused by new variants which then subside after a degree of natural immunity has been obtained? I don't know, and I suspect neither do you. As ignorant laymen, these are distinct possibilities to which we must be receptive, at the very least.

And evidence for their effectiveness may be one thing, even if it is openly acknowledged that one can still catch, transmit and even die from Covid-19 after vaccination. What about evidence that they do harm? Because evidence - not proof, but evidence - certainly exists. I should think the obvious examples are the unfortunate individuals, many of them young (unlike the average Covid death), who have suffered blood clots or heart inflammation shortly after receiving the vaccine, sometimes with fatal consequences.

The problem we have is that governments, along with the media, are so maniacal about getting everyone vaccinated that they are failing to disclose the possible risks. This is, at best, irresponsible. When governments start to wilfully hide the risks, and then use methods of force or coercion to get people to take the vaccine, that is where the blood of people who die as a result of taking the vaccine is on their hands.

May we establish a few facts?
- There is evidence of serious adverse reactions to the Covid-19 vaccines
- Clinical trials are not due to finish until 2023. Ordinarily, no vaccine would be offered to the public until clinical trials had established its safety beyond reasonable doubt
- We do not have any long-term data for these vaccines, and have no way of knowing what the long-term effects may be, which is why it is somewhat reckless to insist on vaccinating children and pregnant women, who are themselves at very low risk of falling seriously ill with Covid-19.

With respect, I think your stance on this subject is erroneous. The vaccines, as with everything, should be subjected to intense scrutiny and some cartoonists are doing valiant work in highlighting matters about which it is the responsibility of politicians and journalists to discuss. The vaccine debate is far from being clear-cut, and I think the Cartoon Movement has a responsibility to understand that some vaccine scepticism is valid and not the preserve of conspiracy theorists and extremists. I hope you will reconsider your position and ask yourself, if a previously healthy 20-year-old dies because they have suffered an adverse reaction to a vaccine which they have been pressured into taking and deceived into thinking was completely risk-free, who is responsible for their death?