Our May newsletter is out! 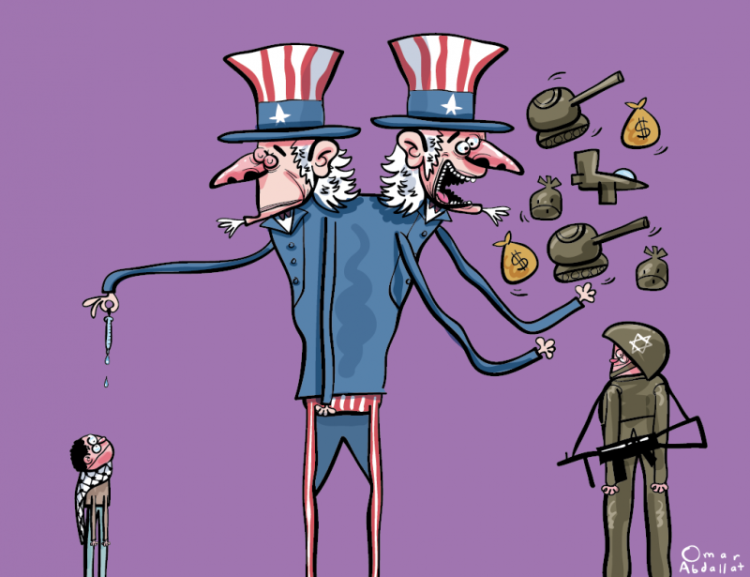 Another month has passed, so time for an update from us! Read our newsletter here. This month, we took part and hosted several online events, launched our new educational branch together with an exhibition in Lithuania and published loads of cartoons. The dominant topic this month was of course the escalating violence between Gaza and Israel. 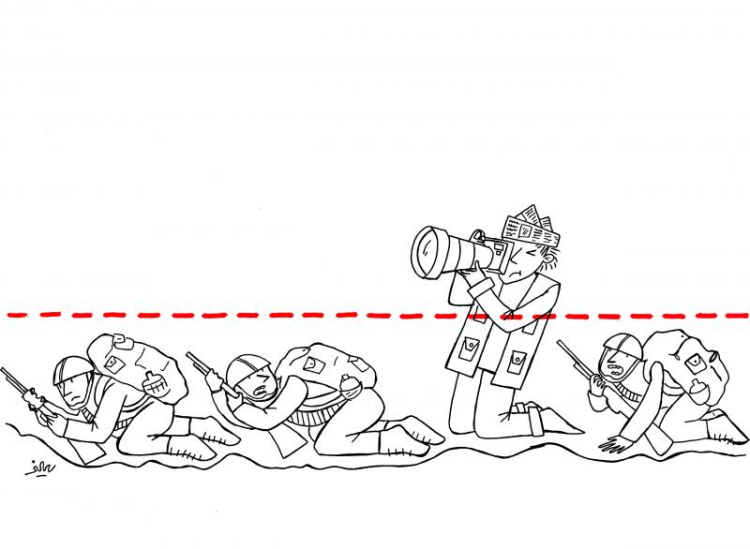 Reyhaneh Karimian was born in Isfahan, Iran in 1986. She has a B.A in Business Management, and has been publishing her cartoons in the press since 2007. Check out her Instagram to see more of her work. 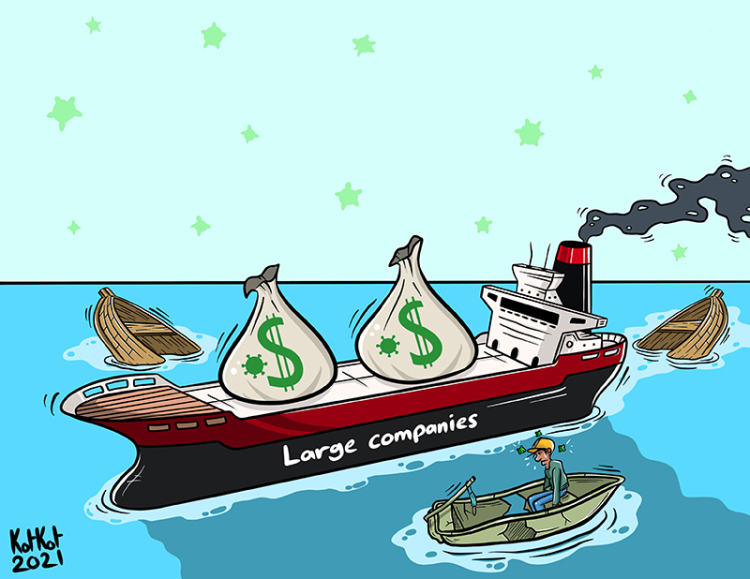 Morad Kotkot is cartoonist from Jordan. Check out his Facebook page to see more of his work. 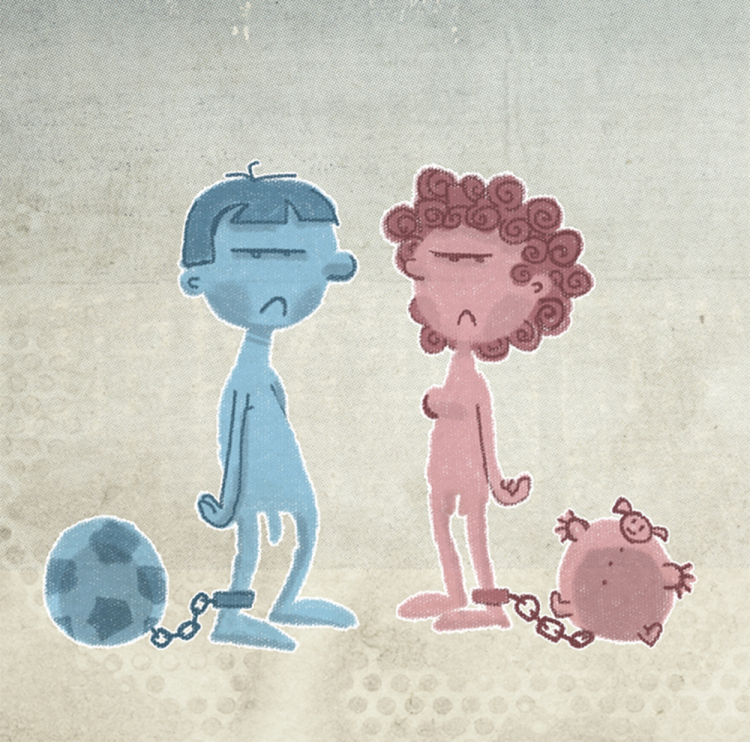 Exprai is a Basque cartoonist, working with mostly local print and digital media. In 2019, he worked on a comic book about the history of Spain with historian Javier Traité. Check out his Instagram to see more of his work. 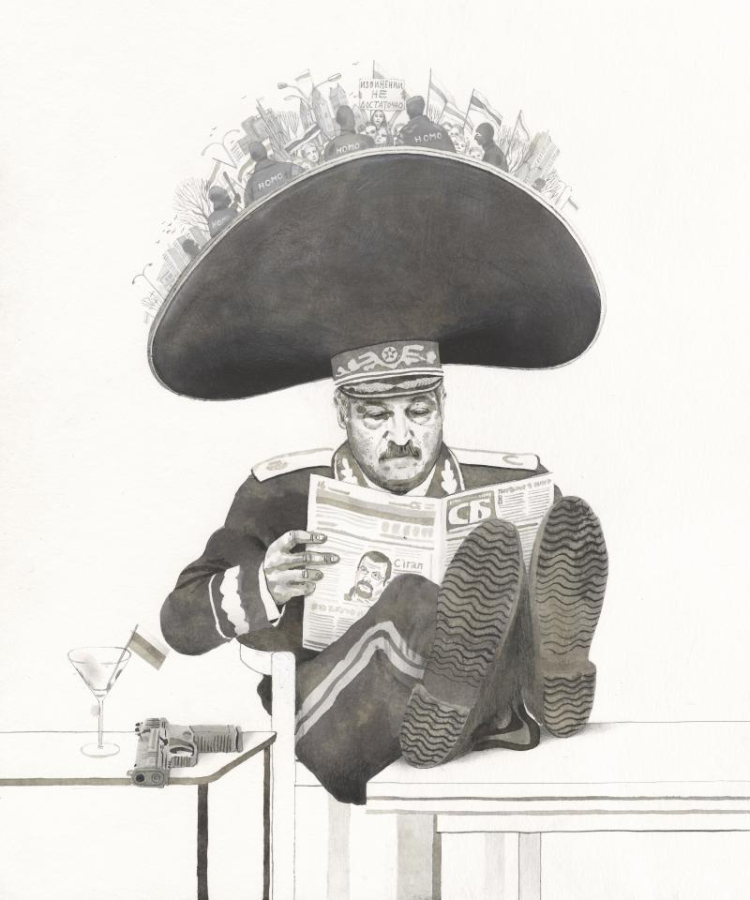 A portrait of Lukashenko.

Although he joined us a while ago we didn't get around yet to introducing Derek Bacon, an English illustrator living in the Netherlands. He has worked in editorial illustration since 2004, including 14 years of creating covers for the Economist. Visit his website to see more of his work.

The difficulty with drawing about Israel and Palestine

With the escalation of violence between Israel and Palestine, the number of cartoons about this conflict has, not surprisingly, increased dramatically as well. As a cartoonist, I find this topic to be one of the hardest things to draw about. As an editor, I also find it challenging which cartoons to pick for publication on our homepage or to highlight on social media. Let me explain why.

Cartoons are basically opinions on paper. When I draw, I try to present my perspective on an issue. At the same time, I consider myself to be more of a journalist than an activist, so I try to keep my perspective based on facts and to take all sides into consideration. The same goes for my job as editor. I consider Cartoon Movement to be a journalist platform and as such the content we publish should be journalism, not activism. And this isn't easy when it comes to Israel and Palestine.

In general in the world of editorial cartoons, there are three camps in this Israeli-Palestinian conflict:

1: the pro-Palestine camp
2: the pro-Israel camp
3. The 'neutral' camp
(basically cartoonists saying that both sides are to blame)

And no matter which camp a cartoon comes from, they all misrepresent reality to some degree, because the reality of the situation is so complex.

Within this (perhaps largest) camp we can distinguish more moderate and more extreme cartoons. This is a mostly geographic distinction; the legacy of the Second World War and the Holocaust still ways heavily on Europe, and therefore most European cartoons will use more moderate visual language when drawing about Israel, like these cartoons by Marian Kamensky and Maarten Wolterink. 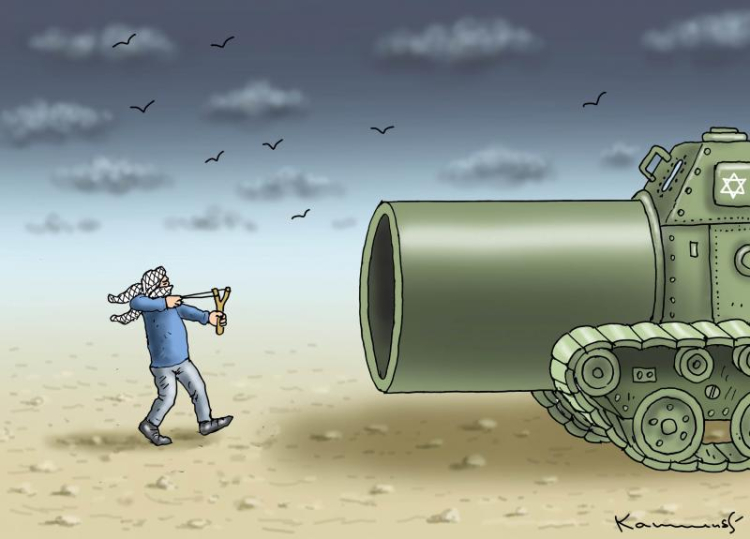 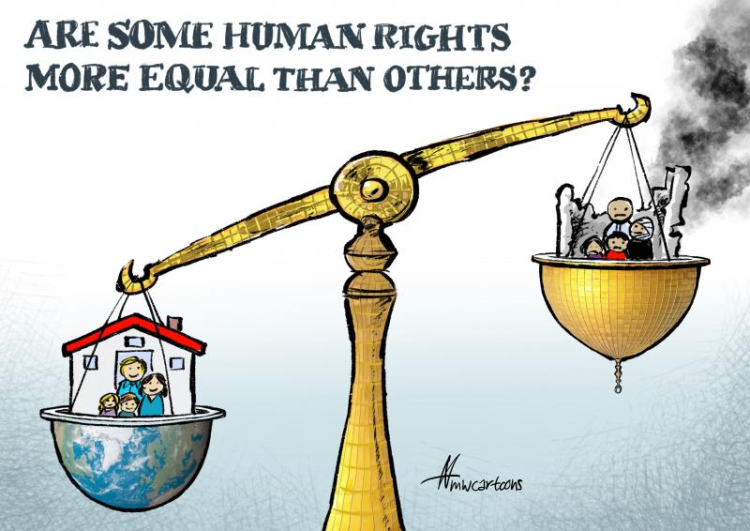 In Latin America, the specter of the Holocaust is felt less, and analogies between Nazi Germany and Israel are more commonplace, such as this cartoon by Peruvian cartoonist Karry. The use of Nazi imagery is not something I support, mainly because I don't think its helpful to what you are trying to achieve as a cartoonist. If your goal is to make people think (and perhaps even change their minds), you are estranging a lot of people (e.g. moderate Israelis) by using extreme symbols. 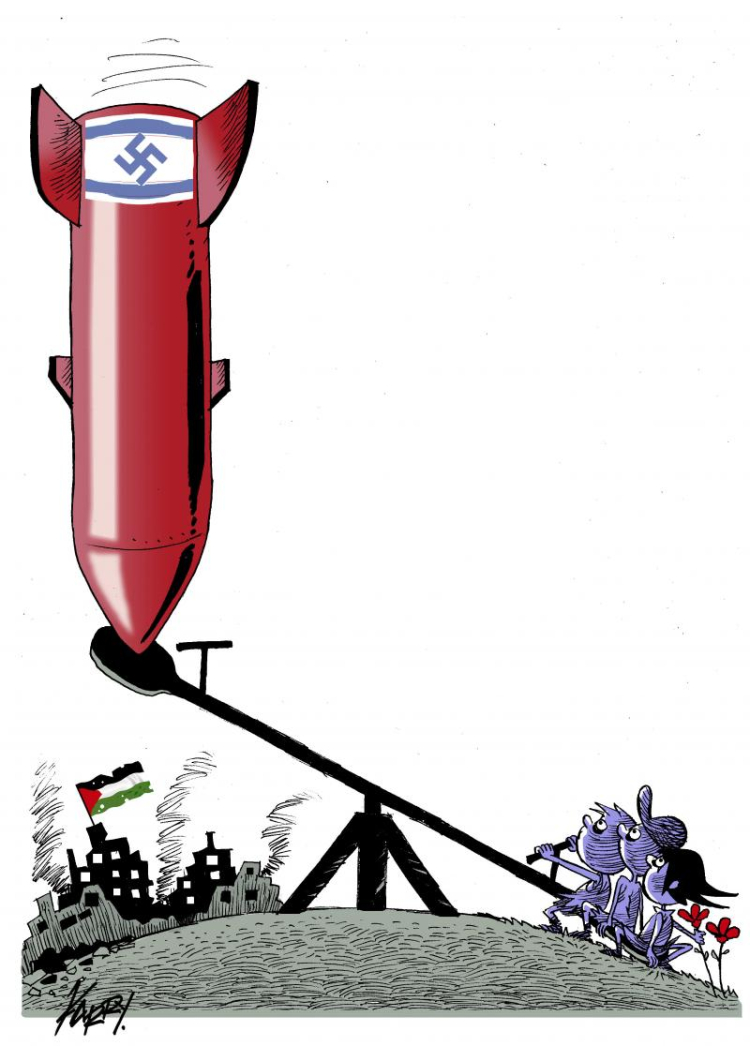 In the Arab World, the conflict is far more present and immediate. The majority of cartoonists in the region are firmly in the pro-Palestinian camp, and their anger shows in their work. Like cartoonists in Latin America, they do not shy away from WW II imagery; their cartoons also tend to have more shock value (blood, war victims etc.) than cartoons from other parts of the world: 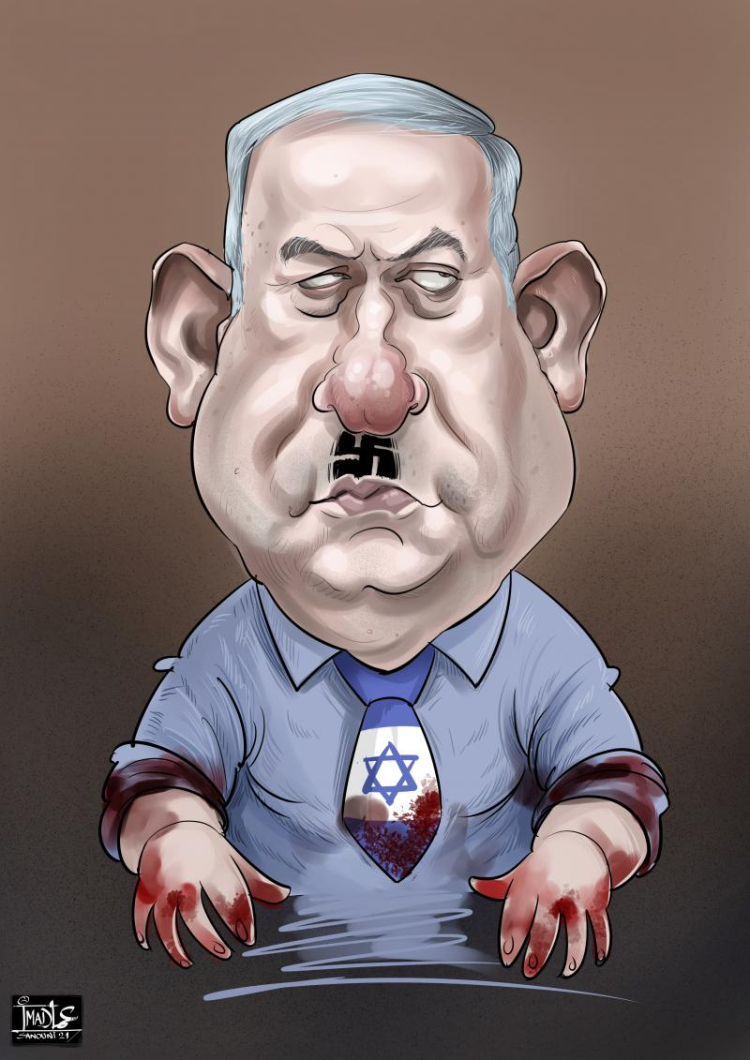 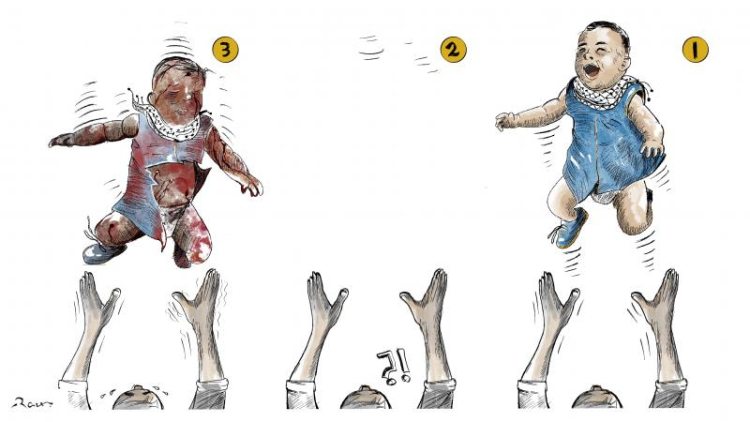 Cartoon by Rafat Alkhateeb (Read the cartoon from right to left.)

The pro-Israel, or anti-Hamas camp, is smaller on Cartoon Movement. The argument in these cartoons is that Hamas is a terrorist organization that would eradicate Israel if it had the chance. In the cartoon below, Hamas is the snake in the grass: 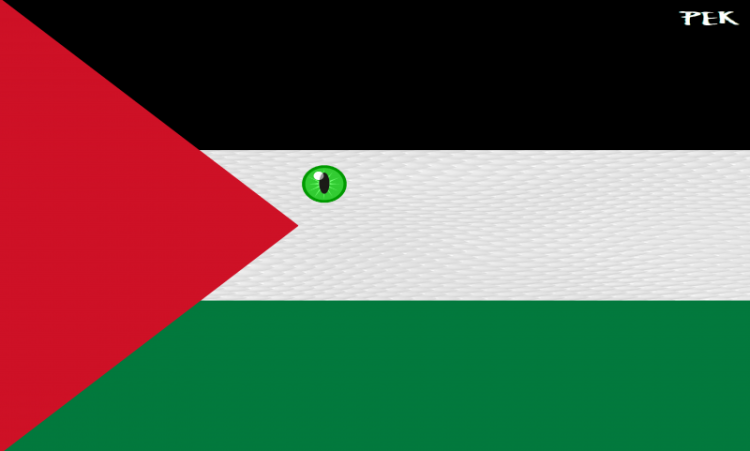 This cartoon (again by Marian Kamensky, which goes to show a cartoonist can be in two camps simultaneously) shows the tactics of Hamas: 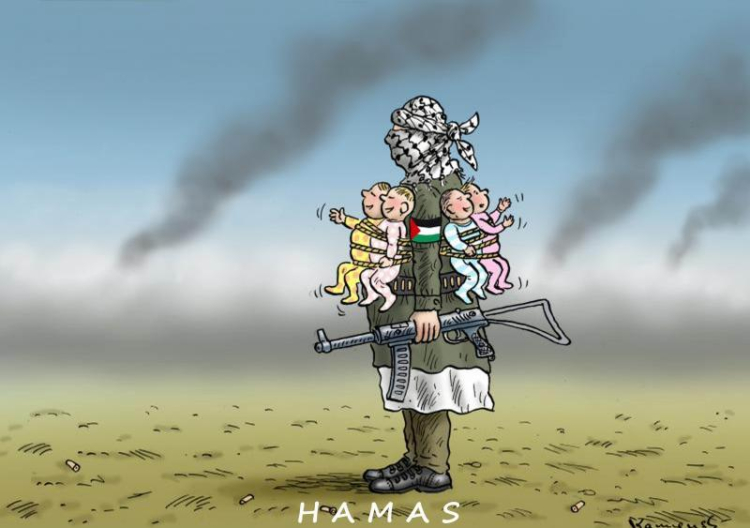 They're not wrong in their depictions. Hamas is widely regarded as a terrorist organization that doesn't shy away from putting Palestinian people in harms way if it suits their tactics. And like all oppressors, they do not handle criticism well: our only cartoonist in Gaza, Majda Shaheen, was similarly critical of Hamas in her work, receiving death threats because of her work. In 2018, she disappeared, and no one has heard from her since. 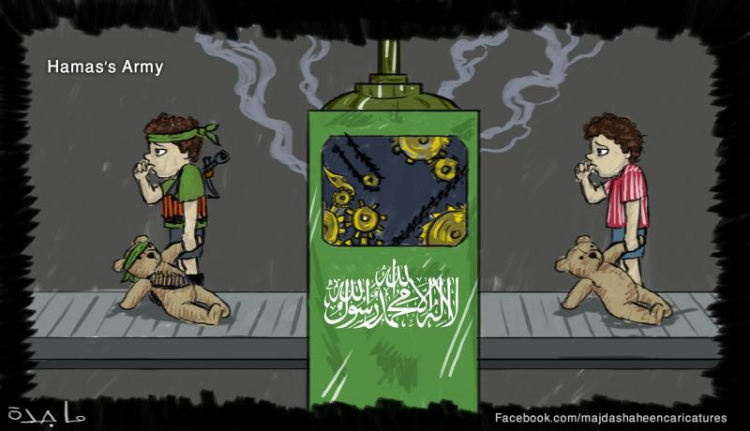 Cartoon by Majda Shaheen (read from right to left)

In Europe and the US, most cartoons that appear in the newspapers are from the neutral camp. They condemn the violence, and call on both parties to stop the bloodshed and sue for peace. Here are some examples by Marco De Angelis and Iman Rezaee. 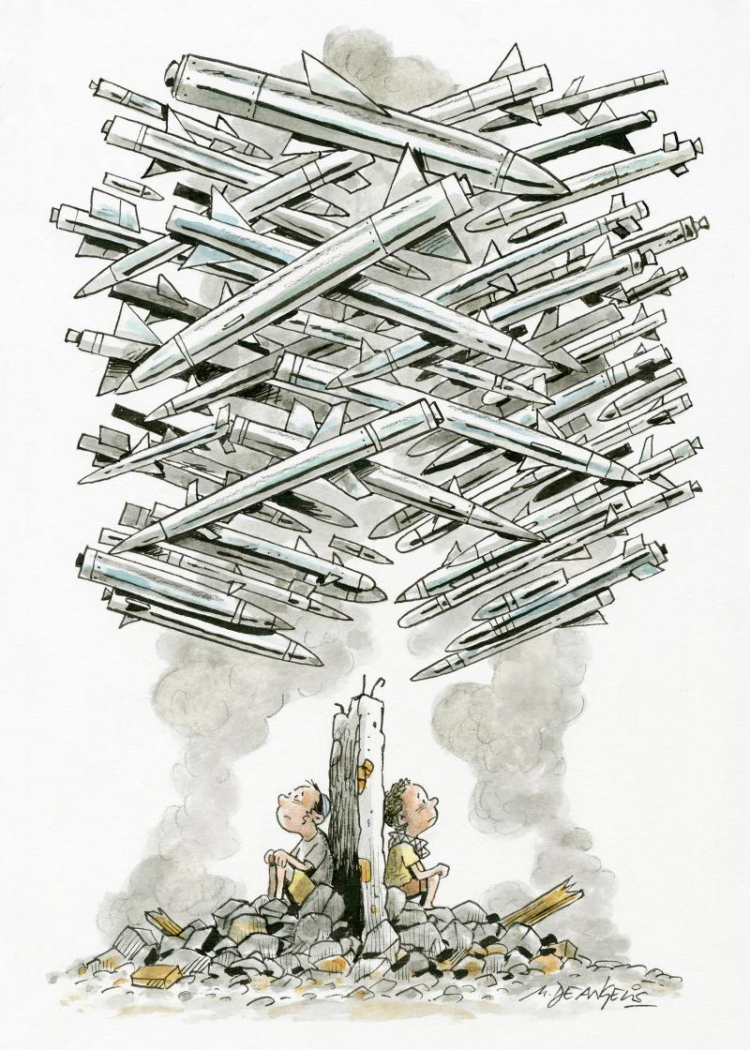 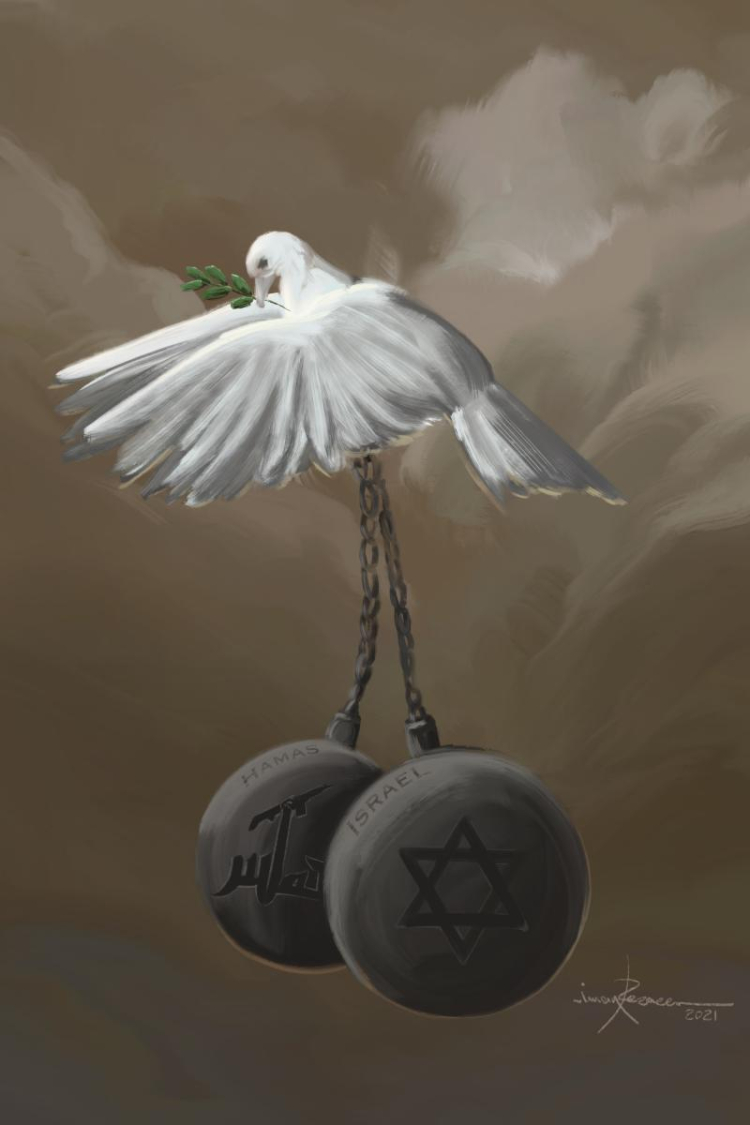 The problem with these camps is than not one of them truly represents the reality of the situation. The overwhelming majority of cartoons from the pro-Palestinian camps ignore the thousands of missiles that Hamas shoots at Israel, and the fact that Hamas is recognized the world over as a terrorist organization. In turn the pro-Israel cartoons ignore the atrocious way the Israeli government controls Gaza and treats Palestinians in general (a recent Human Rights Watch report called Israel an apartheid state). And the neutral cartoons mainly fail to take into account the skewed power relation between the extremely well-funded hi tech Israeli Defense Force and the Palestinian home-made missiles. Just take a look at the death toll on both sides: one Israeli victim for every ten or twenty Palestinian dead.

In part, this misrepresentation of reality is part of what cartoons are. They simplify reality, and as such, they often omit part of the story. But in a conflict that is so polarized as this one, these omissions become more obvious, not least because they tend to be pointed out immediately by people adhering to a different camp. And I find the omissions become more difficult to defend, precisely because they are so obvious. So both as an editor and as a cartoonist, I tend to favor the more moderate depictions. These can still be just as hard-hitting - the first cartoon by Marian Kamensky shown above was one of our most popular cartoons on social media this month - and may even make someone in a different camp stop and think.

If you want to take a look at the cartoons I recently made about this subject, you can see them here.

LOL: The Limits of Laughter 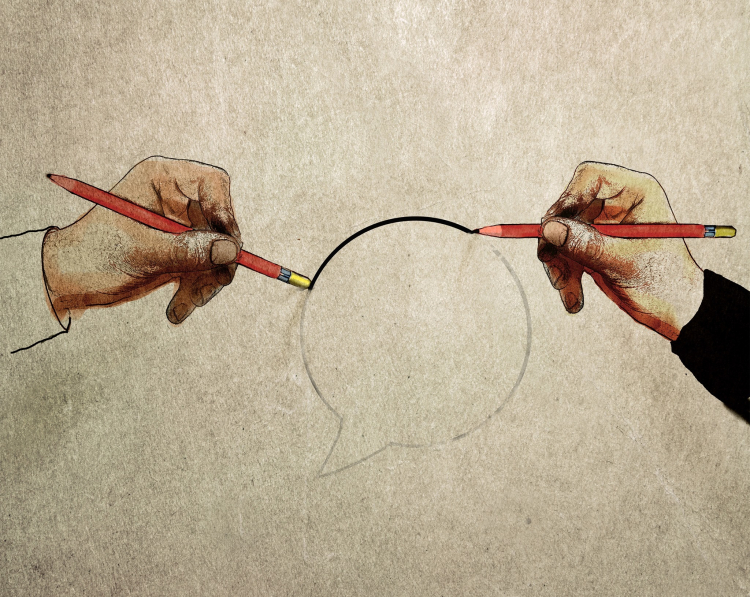 What are the limits of laughter? Join us online Wednesday May 19 between 4pm and 5:30pm CEST as Cartoons in Court presents research (work in progress) on cartoons and the law. In the second part, we talk to former New Yorker editor Bob Mankoff about humor and (self-)censorship.

The Embassy of the Kingdom of the Netherlands in Lithuania has a history of over 100 years bilateral cooperation with Lithuania. This year, our new educational branch The Next Movement is working with the Embassy, inviting youth across the country to share their ideas about the future.

To kick off the project, created an exhibition of 30 cartoons titled You make the difference that will be on display at the National Martynas Mažvydas Library in Vilnius, Lithuania. The exhibition shows past and present perspectives on various ways of how we can make a difference when it comes to human rights.

Here below are some photos we took at the opening. The exhibition is on display until May 28. Entrance is free, so if your in Vilnius, go check it out! And if you’re not in Vilnius, you can see the entire exhibition online here. 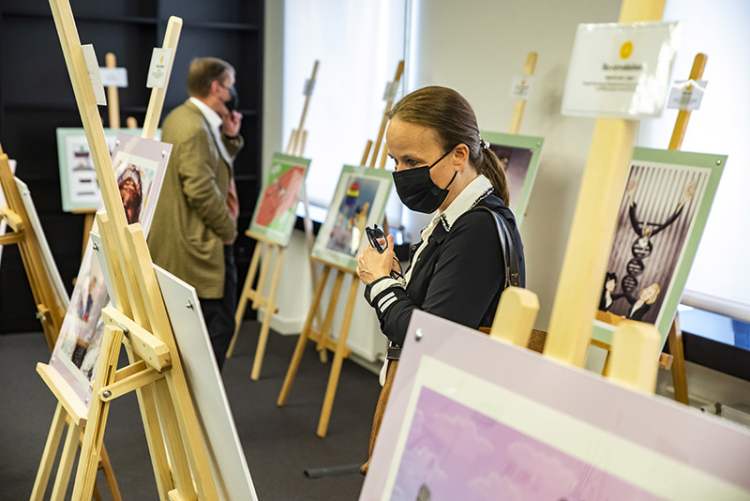 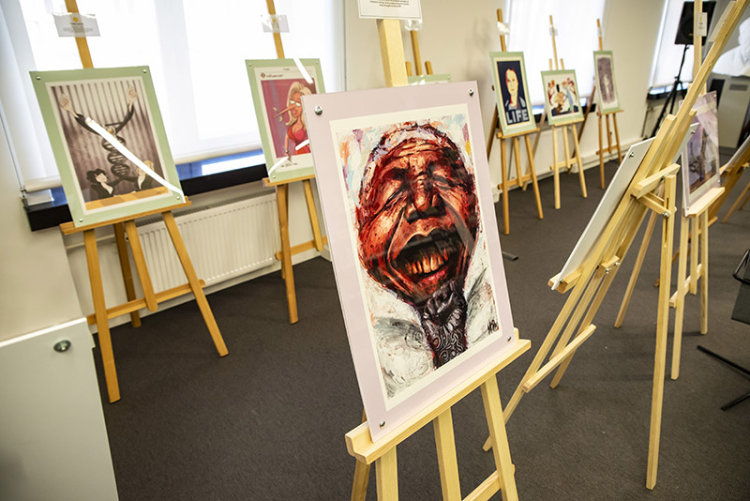 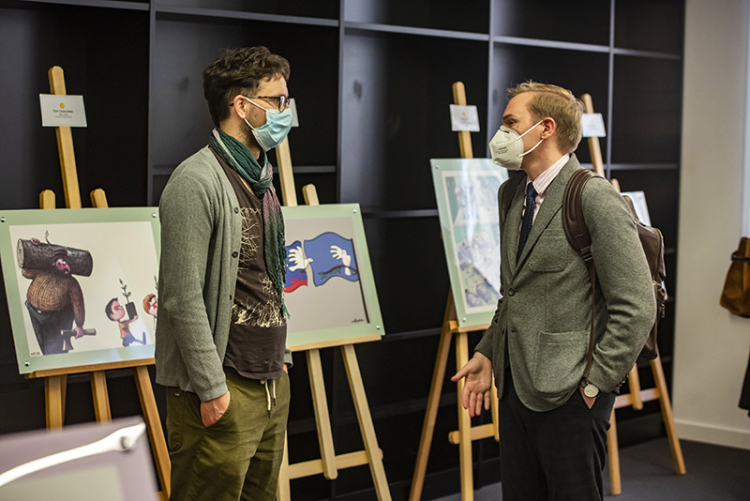 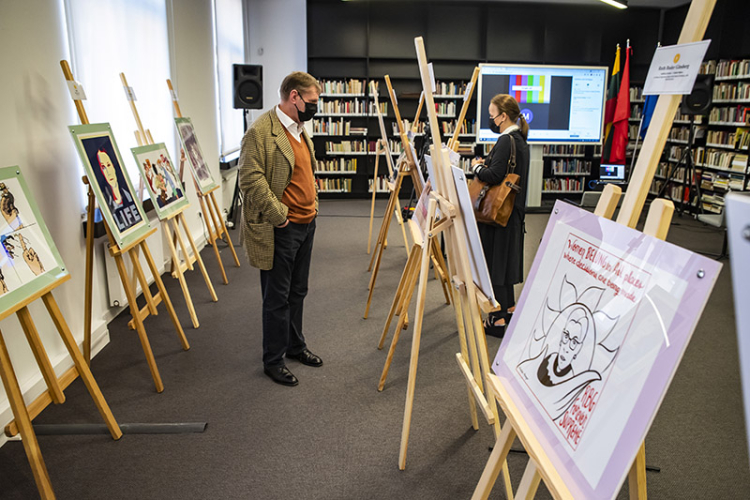 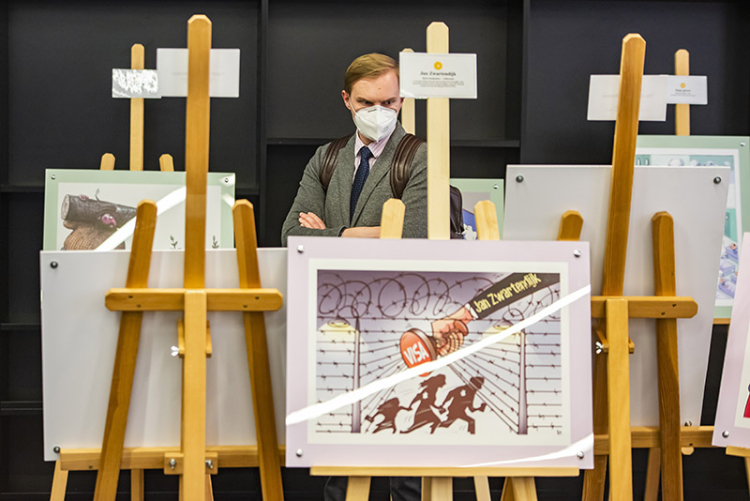 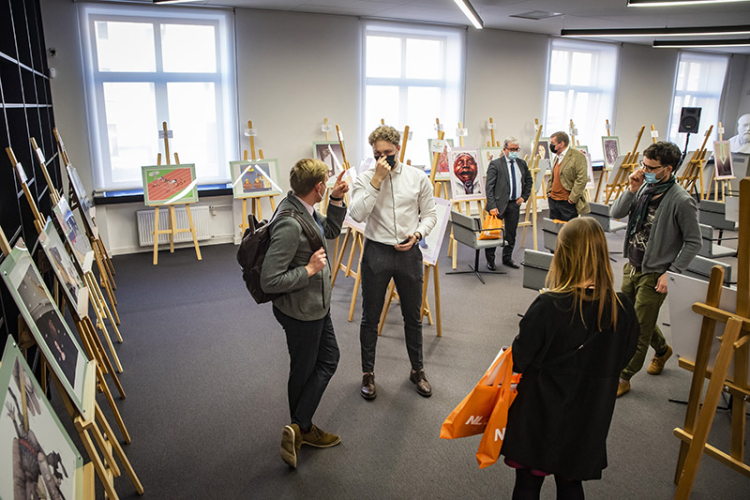 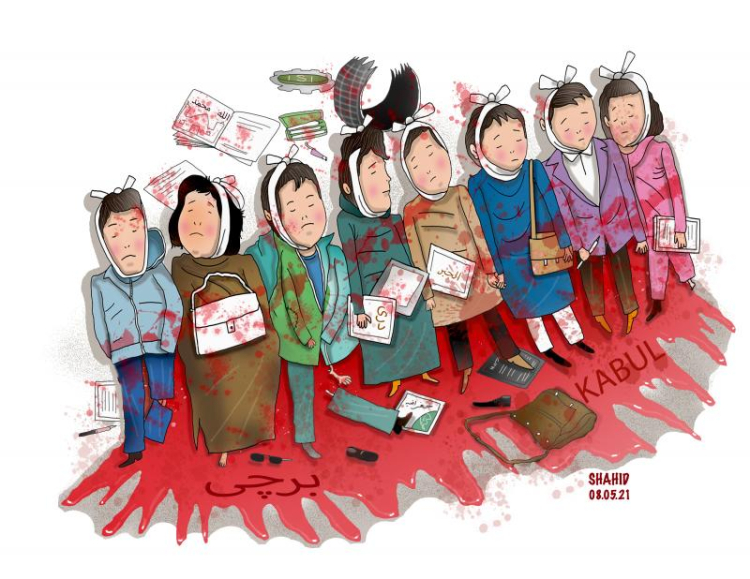 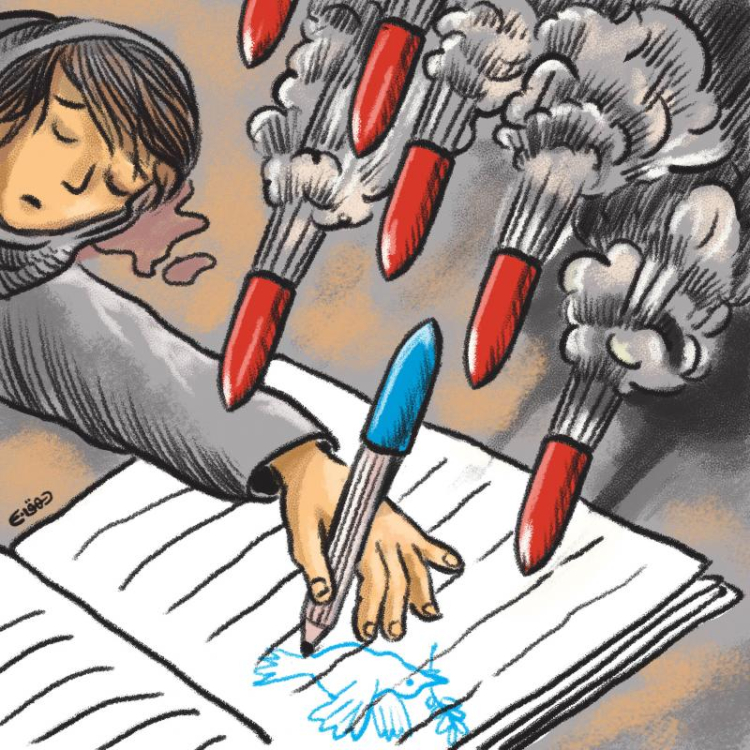 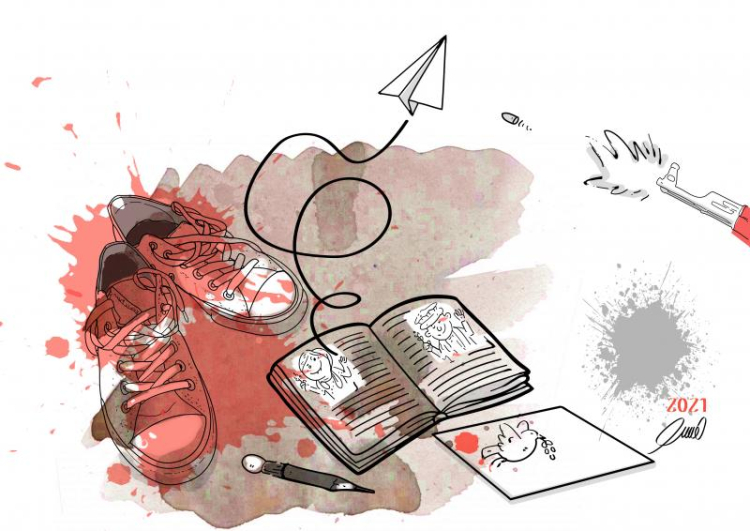 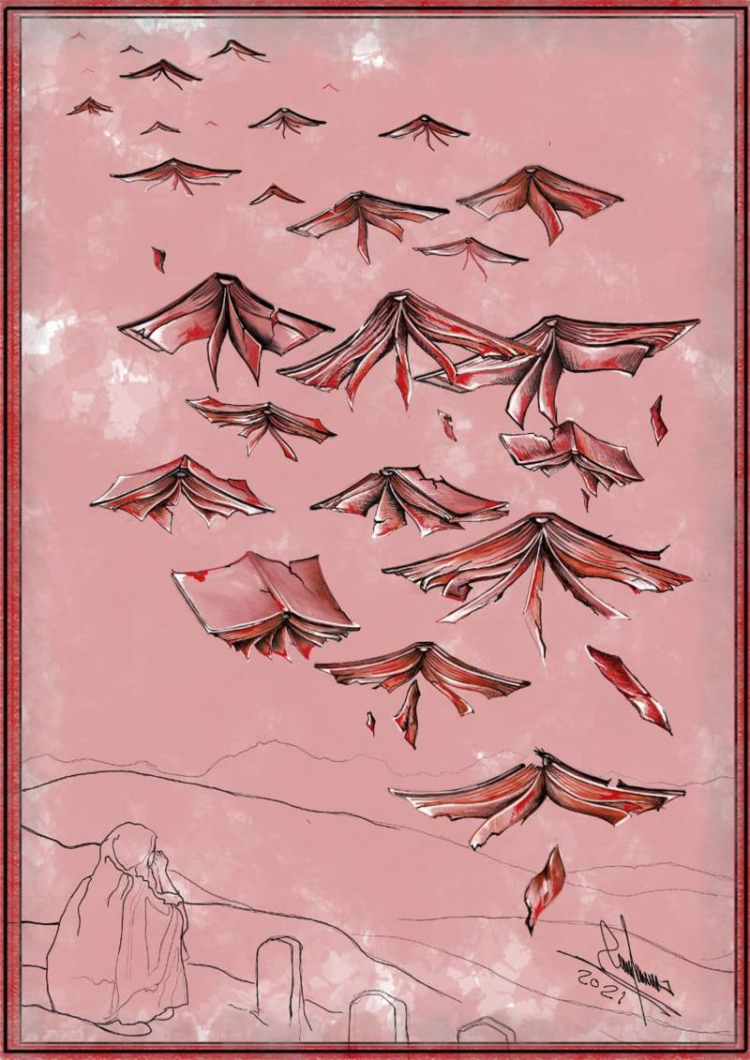 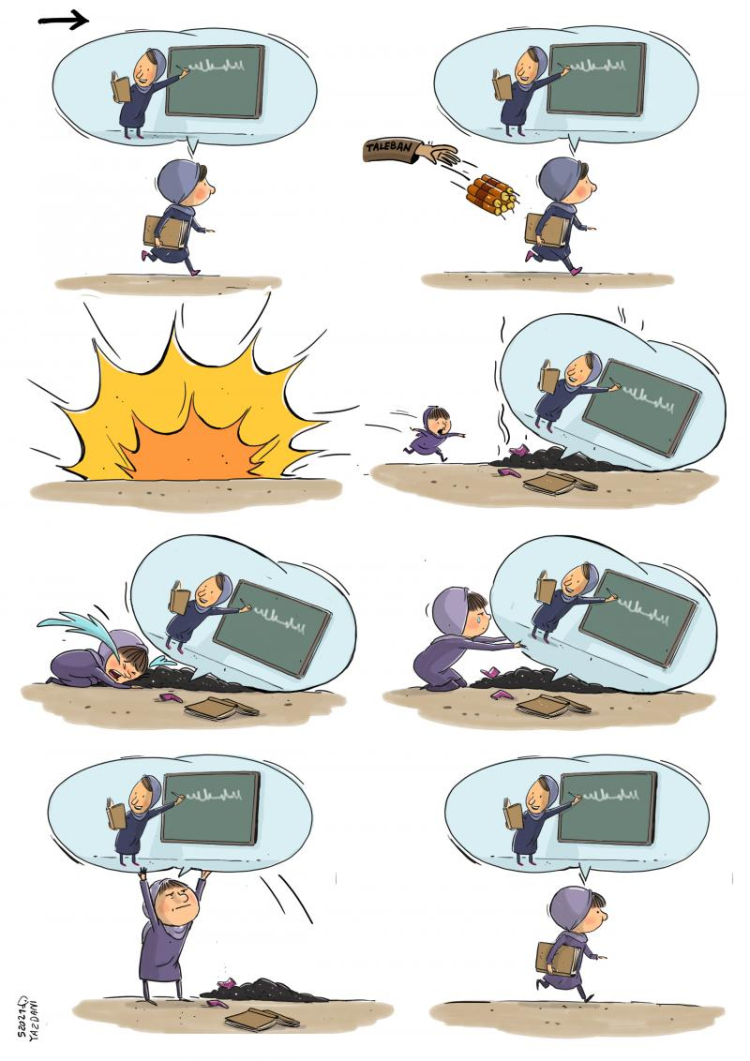 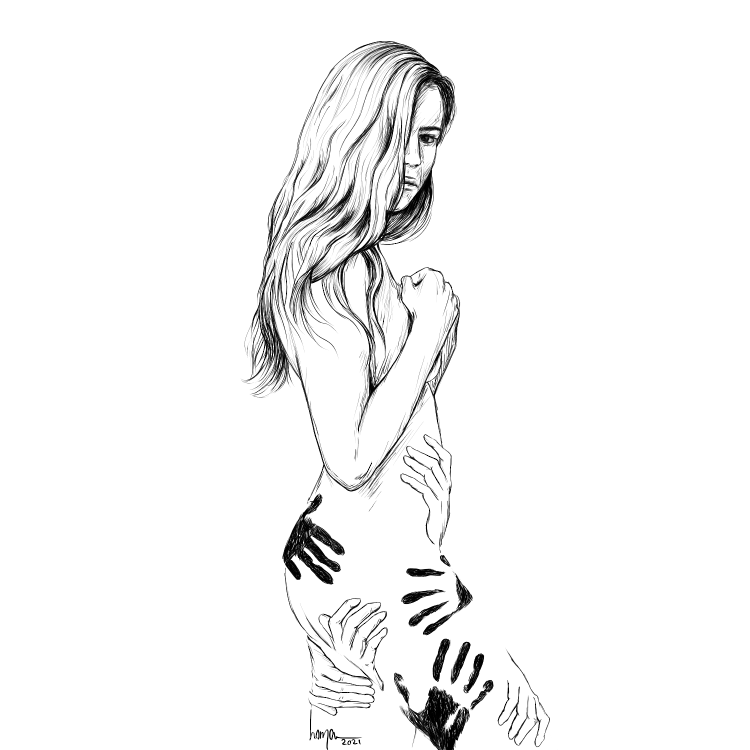 Homa Eskandari is an Iranian artist living in the Netherlands. Her work mainly deals with social political problems in Iran, especially women and the pressures on them. Follow her on Instagram to see more of her work.