Pay Per Laugh: Il Manifesto and the "Visibility" Currency 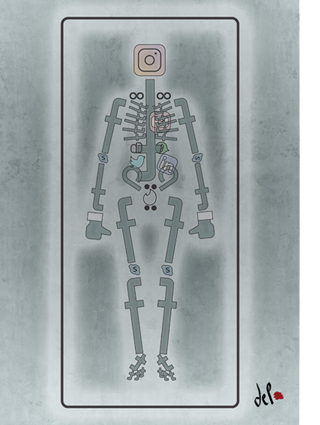 Have you ever been paid in visibility?

Visibility is an odd currency, whose value increased ten-fold when the internet era kicked in - say, the beginning of the 2000s. If my visibility liquidity was converted in euros, I'd be a millionaire.

What is this visibility retribution? It happens when a professional in some field, a political cartoonist, for example, is published without being paid actual cash with the stated or unstated promise of future payments, and/or with the stated or unstated guarantee the visibility granted by this or that publication will help this professional in her/his career.

When visibility payments become a habit

But what happens, really, when visibility becomes the most used currency? Let's take an example among many, but really poignant because we are talking about a publication that has been around since 1969.

Il Manifesto, an Italian newspaper distributed - digitally and in print - in around 10 thousand copies a day. Il Manifesto spun from the most left-wing area of the PCI, the Italian Communist Party and, over the last five decades, has always championed fair work conditions, freedom of expression and democracy.

Obviously, satire plays a big role in this newspaper. Vauro's illustrations were published on page one until 2012 and, after him, another wonderful editorial cartoonist, Mauro Biani, took over.

At that point, someone at Il Manifesto had an interesting idea. Why not opening a cartoonist contest to find Biani's inheritor? Cartoonists could send their works, being told up front they won't be paid for that, but being promised the possibility of becoming the new in-house cartoonist.

This, in September 2019. I am part of a number of cartoonists groups and, obviously, the contest sparked a lot of interest. Many of my colleagues decided to participate and started sending their works.

What happened then is explained in a note dated 30 September. Il Manifesto had been receiving so many brilliant cartoons they decided to publish the best ones in the "community" pages of the newspaper, to - wait for it - show them to all the readers. So, simply put, cartoons wouldn't be paid, not now, but in the end they would... kind-of-be paid, in visibility.

Since then, visibility has been the currency. Biani's successor? No sign of this mysterious cartoonist. And after all, why stopping this bevy of illustrations, if cartoonist seems to be content with the visibility retribution?

I never sent a single cartoon to Il Manifesto. I admit I was tempted by the idea of being published by them, but I couldn't bring myself to accept this contest of theirs and maybe, for once, I could see through their good intent and foresee what would have happened.

Publishing editorial cartoons for free is a disgrace for the profession of the editorial cartoonist. Cartoons can be donated - I did it many times - but the promise of glory can't replace real retribution, which is what distinguishes a nice hobby from an important profession.

If editorial cartoons are not paid, if the profession of the editorial cartoonist is not recognized, then the value of a satirical work is diminished. Moreover, the safety of the author is at stake, because he won't be protected by any union or real employer - and we saw cartoonists are targeted as much as journalists are.

One could even argue that because Il Manifesto doesn’t pay for these illustrations, it also doesn’t really believe in what they express. Otherwise, they would be retributed and recognized as employees.

Cartoonists are, in the end, journalists, and Il Manifesto, with its 1,555,748.37€ of public funding in 2018, pays - I hope! - their journalists. Newspapers are expensive machines, that's true, and this newspaper saw rocky moments, being short of money, touching bankruptcy in 2012. But this can't justify this lack of professional ethics.

They should stop this silly contest and pick a cartoonist, or pick none and live without satire. They should do that because, at some point, an editorial cartoonist might decide to draw an illustration about them. For free, of course.

It is a total lack of respect and decency... and coming from Il Manifesto... so... good for you, Emmanuele, cause our art should be paid and honored, but this value needs to grow first inside of us. Good for you.

I think that the main problem is that there are many improvised cartoonist (in Italy for example, I don’t know if in other countries is the same…) that do cartoons as a hobby while they do other jobs. So they are happy if a newspaper or a website publish their cartoons without paying them; they are “repaid” by the congratulations they receive from their parents and their facebook friends…
ebert