An Open Letter to Mark Zuckerberg

Cartoonists have fallen victim to Facebook moderation (or in stronger terms: censorship) more and more in recent months. Here are two (1,2) recent examples of cartoons that were removed from Facebook, probably because they include symbols that refer to Nazi Germany.

Even more serious is a recent cartoon by Thai cartoonist Stephff about Myanmar and the Rohingya that was deleted by Facebook. In this instance the most likely scenario is that the cartoon was removed because it was reported by someone who did not agree with the opinion stated in the cartoon. This does beg the question: did this cartoon cross a line (by showing graphic violence), or is this a case of censorship by Facebook, removing critical journalistic content? We think the latter. Stephff has written an open letter to Facebook, which was also published by Thai newspaper The Nation: 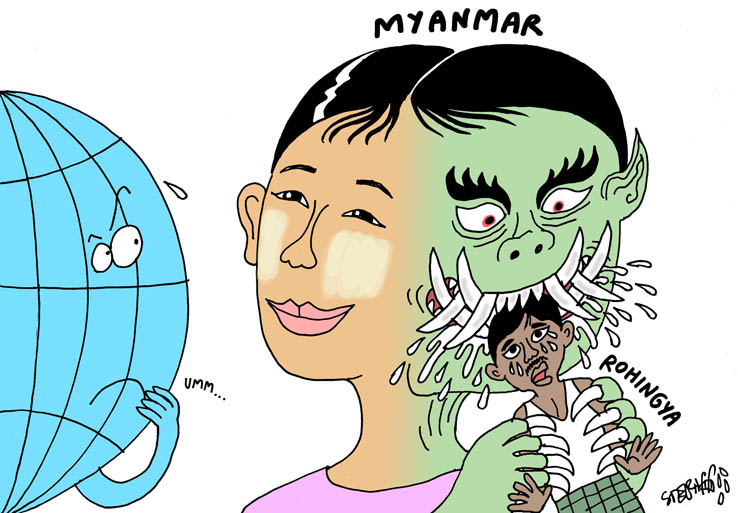 I have been a daily political cartoonist since 20 years now . On Thursday evening I received a notice from Facebook that I have violated Facebook rules by publishing on my Facebook page 'Stephff Tribal Art' the cartoon above , therefore it was suppressed and I am asked to comply with 'Facebook rules' or else.

There was no possibility to argue - no button I could press to defend myself against this serious misunderstanding . What are these 'Facebook rules' exactly? That we cannot complain about a genocide in the making because some ultranationalist, xenophobic Burmese netizens have complained to Facebook? What about those same netizens who are spreading a campaign of hatred against the Rohingyas with the help of their compatriot cartoonists? What about all these racist Burmese people who have come to insult me on my page each time I have published a cartoon about the Rohingya tragedy?

What is exactly Facebook's policy? To stop the people who try to bring some substantial fight against bad things happening in this World and allow only people who publish pictures of their lunch?

Why don't you employ real people with a brain to judge if a cartoon is racist or if - on contrary - it fights against racism. Because apparently your stupid algorithms are far from being able to tell the difference. I can't believe you are siding with the very same people who are supporting the oppression and killings of the Rohingya people. Is this the 'better World' Facebook is trying to build where we cannot criticize harshly a genocide in the making?

I, personally, have stopped using facebook a year or two ago. Frankly I don't know why I every used it. Thought provoking cartoons such as what you have on your site should not even bother being on facebook. We all know what the purpose of facebook always was. Let's just put that "social platform" behind us and focus on finding better healthier ways to reach intelligent audiences. I follow your through an RSS feed and actually did not find your through facebook in the first place. Thank you.