After receiving numerous threats of violence, condemnations and calls for a boycott of Dutch products on our Facebook page, we feel we need to make an official statement regarding the Prophet Muhammad cartoon contest organized by Dutch right-wing politician Geert Wilders later this year.

Because we are a cartoon organization located in the Netherlands, some people presume we support this initiative. We do not.

This cartoon contest is asking cartoonists to draw the Prophet Muhammad. Depictions of the Prophet are considered blasphemous by many Muslims. Geert Wilders claims that this competition is to show that freedom of speech should never bow down to region. 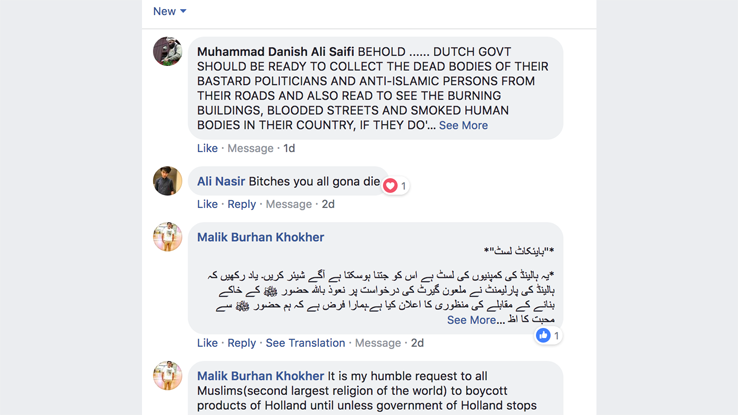 Screenshot from Facebook: some of the comments we have received.

We agree. With the last statement, that is. We don’t agree with this competition. To us, Wilders’ initiative has much in common with the Holocaust cartoon contest organized a few years back by Iran. In both contests, cartoonists are asked to mock a specific subject with the aim of insulting a specific group of people. In the case of Iran, the aim was to insult Jews; in the case of Wilders, the aim is to insult Muslims. In both these contests, cartoons are wielded as a political weapon, to attack a specific group. Cartoons should never be used in this way.

However, we do agree that free speech overrides religion. And we strongly condemn the threats we have received by people who feel insulted over what is, in essence, a few lines on paper. In this case, these lines haven’t even been drawn yet.

Islam, like other religions (or any institution that wields power) is a legitimate target of satire, if that satire is aimed at exposing wrongs and injustices. And satire should never be afraid to be blasphemous to achieve this aim. We have no problem with depicting the Prophet Muhammad in a cartoon, if that cartoon is a legitimate criticism of Islam. But Mr. Wilders is not aiming for a meaninful critique of religion, or to start a thoughtful debate about religion and satire. He’s simply out to insult Muslims. And that’s something we do not want to be a part of.

Jesus is one of the prophets Muslims believe in. He can not justify himself by saying many make fun of his religion. We, Muslims, are not who he is talking about. So he should stop provoking Muslims. We don't make fun of Jesus and won't let people make fun of Mohammad either

This ‘Draw Muhammad’ Contest is a pure disgraceful act; truly blasphemous, a disgusting hateful attack on a Messenger of God.

This contest is a shameless attempt to incite religious violence so shouldn’t be allowed to take place in a civilised world. It’s a deliberate attempt to spread hate, proves pure hate towards Islam and aimed at making Muslims angry.
It’s a despicable act to disrespect a Prophet of God, it’s not freedom of speech, it’s pure racism and a hate crime inciting religious hate and destroying the image of Islam as a religion hurting Muslims bad. I condemn this contest very strongly and believe that all non-racist and civilised people would do the same.

Allah does not exist. Its that simple. Also, this contest is a terrible mockery of the right to exercise opinion by a Dutch politician who should know better.

You have to remember that Muhammad attacked trade caravans, sold people into slavery and started wars against those who refused to follow him. He is not beyond criticism. He is not special.

Nevertheless, Wilders is an idiot.

Why don’t you draw a cartoon of David, who had 100 wives and shamefully lusted after his commander in chief’s wife also. Mohammad had only 11, and never lusted after a married woman. Make a cartoon of the Hindu God Krishna, who lusted after his aunt Radha, despite having a faithful wife, and carried on with hundreds of Gopis (unmarried young women). Make a cartoon of Jesus also, whom you blasphemous retards have dubbed as “gay.”
Nobody should stop you from your reprehensible acts because otherwise Karma will not come into play.

You are willing to make cartoons ofthe Pope (source AT5) but you condemn the making of cartoons of mohammed. Because you are a coward. Muslims resort to violence and that's why we limit our freedom of expression until it is gone. You cannot even stand in the shadow of the Charlie Hebdo heroes.