Life as a Cartoonist in the Digital Age: Our Audience is Bigger than Ever, Our Earnings at an All-Time Low 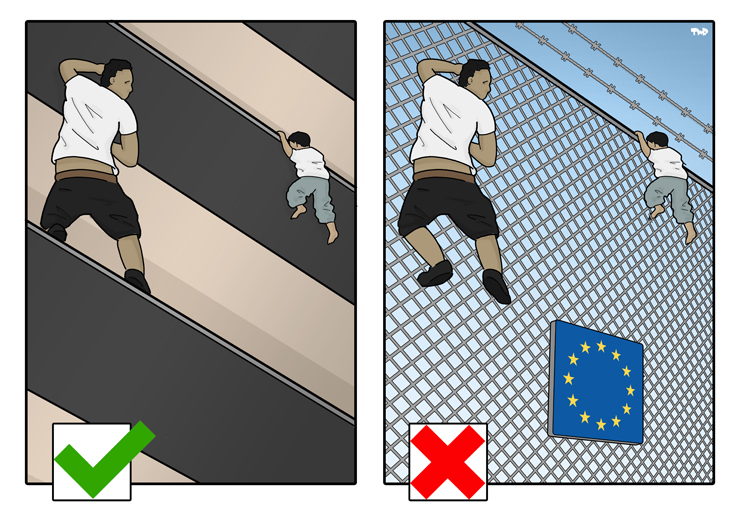 It’s great when a cartoon goes viral. It’s what every cartoonist hopes for: to have your image reach a massive audience, and to hopefully get them thinking on the subject you want to draw attention to with your cartoon.

Two weeks ago, I was very fortunate to have one of my cartoons go viral. Mamadou Gassama, an undocumented immigrant in France, rescued a small child hanging precariously off a balcony. After this heroic act, Mamoudou was (deservedly) rewarded with citizenship. Although I did not want to take away from his heroics I did want to create a cartoon that highlighted the way we think about immigrants in general. We seem to only accept them when they behave like Superman.

And it seems the image struck a nerve. In the end, I received close to 50K retweets and 75K likes on my personal account alone. It’s safe to assume the cartoon has been seen by millions. The cartoon was picked up by many, many media outlets, the vast majority of whom did not ask for permission, nor have they offered any financial compensation for the use of this image.

It’s symbolic of the life as a cartoonist in the digital age: our audience is bigger than ever, our earnings at an all-time low. This cartoon got me 75,000 likes, but only about 175 euro in reprint fees. Republications include many media websites, TV shows and even a Dutch newspaper. Het Parool printed a Twitter screenshot because I wasn’t willing to provide them with a high resolution cartoon for free. They now refuse payment stating they are merely 'quoting' the cartoon.

I took some time to chase some of the bigger online media down to ask them to purchase a license for use. A week later, I have yet to receive a response from all but a few. 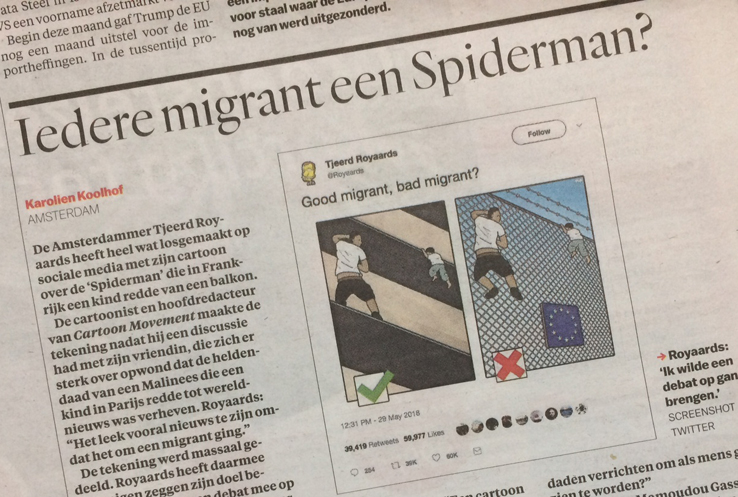 Dutch newspaper Parool reprints the cartoon after my explicit request to buy a license.

A French TV show features my work without asking me.

I do not want to seem like a whining artist, and I'm certainly not looking to get rich, but this practice of using content for free is so wide-spread that it’s threatening not only my livelihood, but that of all creators anywhere who post their stuff online. I need Twitter to connect with my audience and I love it when people share my work. But is it so unreasonable of me to expect media companies to pay a reasonable fee when they want to use my work? They’re not only profiting from my work in terms of eyeballs, likes and clicks, when they post it to their website they are also generating ad revenue with my work, none of which will ever line my pockets.

The saddest aspect of this practice is that media are actively contributing to their own demise. Not paying for good journalistic content means that professional content makers like myself will be forced out of business. It seems that while content is king, content makers are doomed to a life of destitution.

You perfectly hit the target Tjeerd. That's a perfect analysis of the situation.

This might help. I would consider chasing a publication in your own country (in UK under the small claims), but it's a lot of worry if it's not your thing. In the UK a publication must have an assignment in writing to claim copyright. If they reproduced it with out consent, I think they would lose the claim, especially if they contacted you for the original. You will need to prove your losses, so how much would you have charged if they had paid. Posing on Twitter does not give away rights to artwork, it would seem. Study there terms and conditions. Also, you should always include © symbol + year + your name on all the artwork. An artist owns their own work. Newsworthy or not.
https://www.howtogeek.com/310158/are-other-people-allowed-to-use-my-tweets/

This does seem like a pretty clear cut blatant breach of your copyright. Worth pursuing, I would have thought.