The Art of Resistance: Official Selection 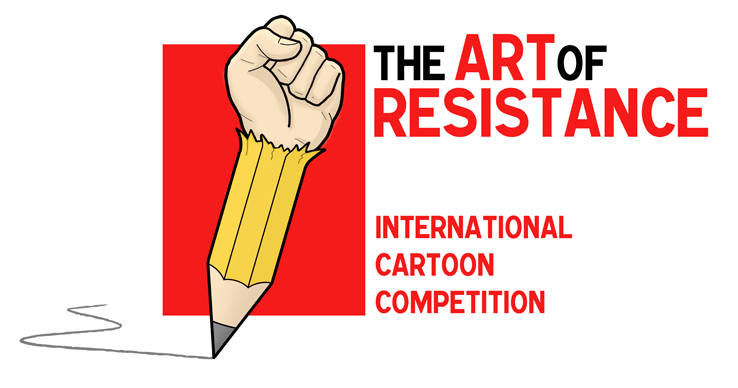 With a total 1781 submissions from 76 countries we think our first international cartoon competition was a huge success! Out of all these submissions we made a shortlist of 200 cartoons; on March 5, this shortlist was presented to a professional jury, tasked with the difficult job to select the cartoons that will be featured in the upcoming exhibition ‘The Art of Resistance’ and to determine the winners.

The jury consisted of Hajo, a well-known Dutch cartoonist, Saskia van Loenen, chairperson of Pers & Prent (a foundation promoting political cartoons and organizer of the yearly Dutch cartoon award Inktspotprijs) and Michiel van Hattem, president of vfonds, a Dutch NGO with a focus on peace.

Superb collecton...wonder if I can still contribute?

Unfortunately, the deadline for this competition has passed. We hope to run another competition next year!

Congratulations for the great job done. Wish you all every success in future too. I contributed, but not seen here. But no regrets, no dissent.

I HAVE PARTICIPATED. BUT NOT SELECTED. ANY VERY GOOD EXPERIENCE. CONGRATS ALL THE WINNERS.

Yes, we can do that. We're actually in the process of putting together a second exhibition out of the cartoons from the shortlist that did not make the jury selection. Once we have more info on that exhibition we'll share that selection, and the entire shortlist of the 200 cartoons as well.

Congratulations to all the winners.

Here in Brasil, my country, we need The Art of Resistence too much.

Thanks a lot.
Osmar

Thank you for holding the AOR competition!
Looking forward for the May 5th 2018 unveiling of the power of the pencil/pen/stylus/stick-drawing-in-the-sand !

Please try and hold warm up competitions throughout the year- keeps us active!