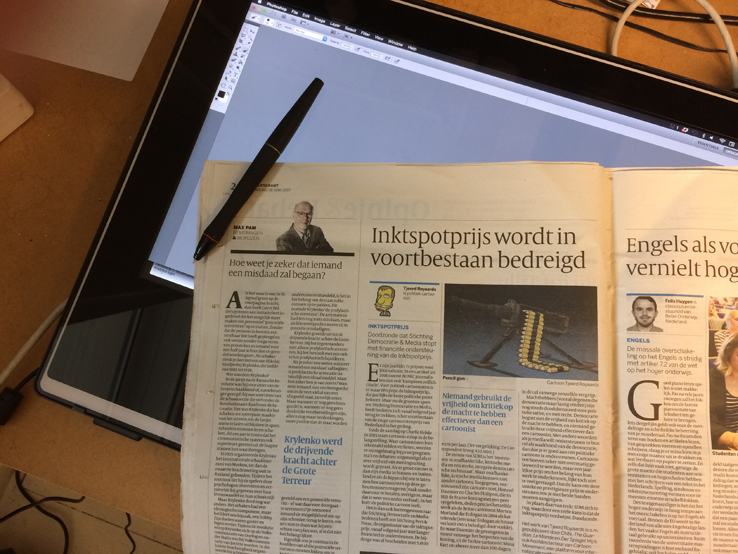 Cartoon Movement editor Tjeerd Royaards wrote an opinion piece about the possible disappearance of the only annual award for political cartoonists in the Netherlands as major sponsor the Democracy & Media Foundation decided to pull out. The article was published in Dutch daily De Volkskrant on Wednesday. Here is the English translation:

There are 75 prizes for journalists each year in the Netherlands. In an article from 2016, Dutch newspaper NRC Handelsblad refers to journalists as ‘champions of self-congratulation’. For Dutch political cartoonists there is only one award: the Inktspotprijs, rewarding the best political cartoon once a year. But now that the biggest sponsor, the Democracy & Media Foundation, has decided to pull out, the survival of the only cartoonist prize of the Netherlands is at stake.

There has been a renewed interest in cartoons and cartoonists ever since the attack on Charlie Hebdo in 2015. For many years, cartoonists rarely left their drawing tables, but now they are regular guests at debates and talk shows when the topic is freedom of expression. And when there is big news, media immediately turn to cartoonists to see how they respond, publishing slideshow of their work (often without paying, but that’s another story).

In this context, the decision of the Democracy & Media Foundation has decided to no longer support the Inktspotprijs is exceedingly strange. Their sponsorship was very modest, just 5000 euro each year euros a year. (The Foundation has a yearly budget of 2 million euro available to hand out in funding.)

The mission of the Democracy & Media Foundation is to invest in independent, critical media and a strong, just democratic state. An independent, critical media can not exist without cartoons. I admit that cartoons are not very innovating. Honoré Daumier and Charles Philipon, who compared the French king to a pear in 1831, did exactly the same work as British cartoonist Morten Morland, who drew Erdogan as a cat in 2014 (a comparison Erdogan allegedly really hates). And where Daumier was imprisoned for mocking of the king, Turkish cartoonist Musa Kart has now been in prison for over 200 days because of a similar crime.

Those in power (and especially those who aren’t very fond of democracy) still fear political satire, and rightly so. Democracy begins with the freedom to criticize power and nobody uses this freedom more effectively than a cartoonist.

In other words, if you want to support media in their role as watchdog of democracy, you should support political cartoons. And cartoonists certainly do not need continuous praise, but one award each year to recognize the importance of their work should not be too much to ask.

The article received an overwhelmingly positive response. Today, The Netherlands Institute for Sound and Vision officially announced they will take over the sponsorship, ensuring this award will continue to exist in years to come.