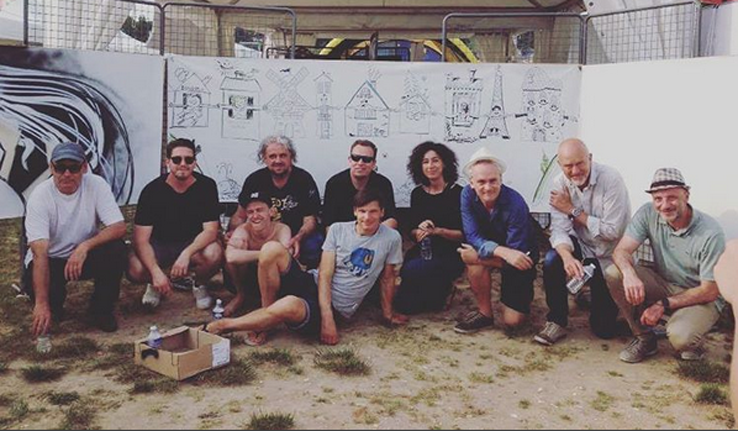 A number of our cartoonists were in France this weekend at the Festival of Europe. The tropical heat, with temperatures soaring to 35°C, did not deter them from drawing some excellent cartoons on the challenges facing Europe today: Visitors of the festival watch cartoonists at work. 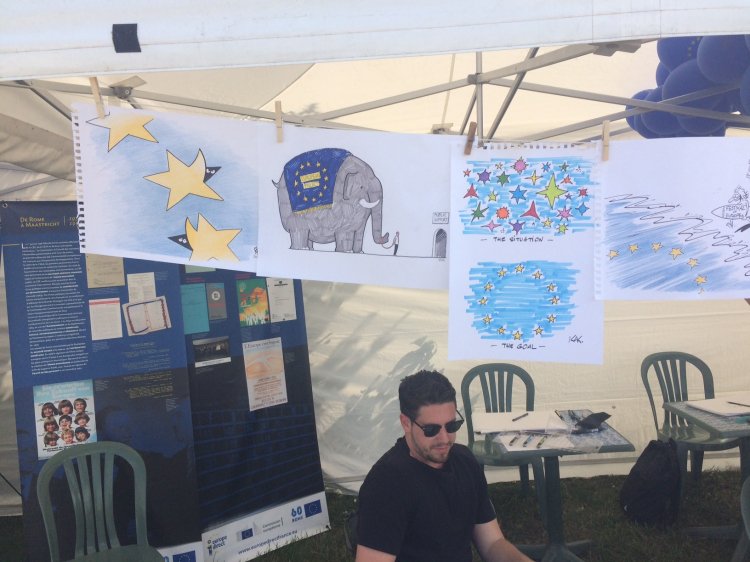 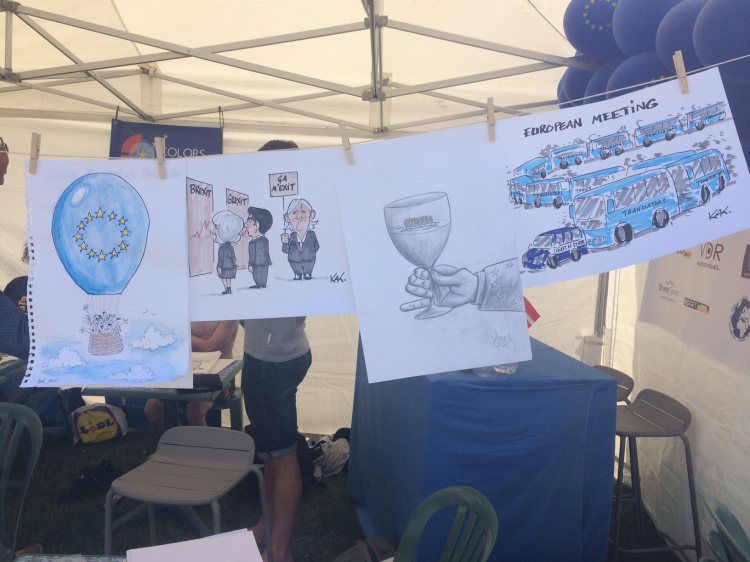 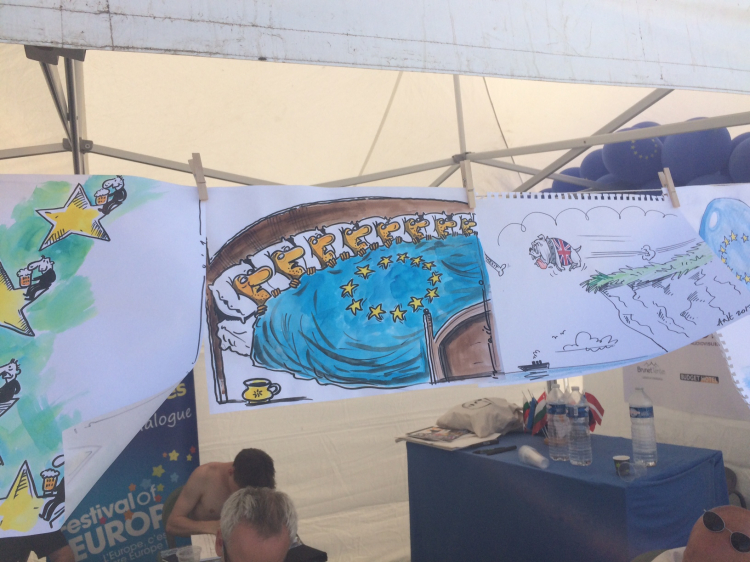 Some of the cartoons that were created. 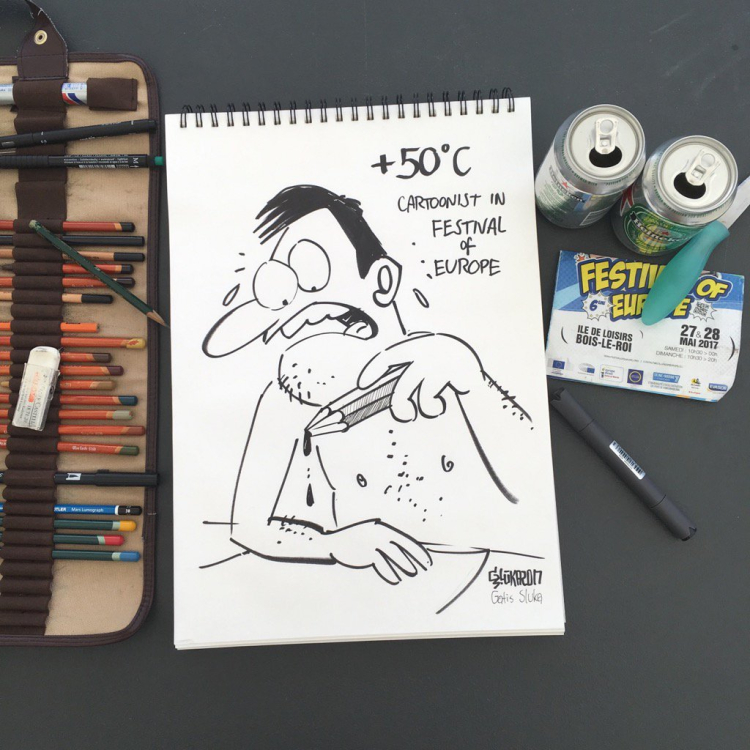 Cartoon by Gatis Sluka, commenting on the working conditions. 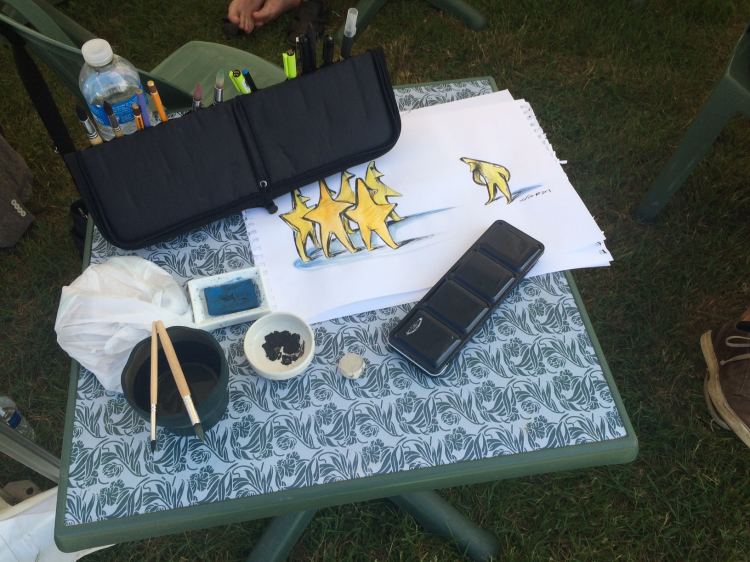 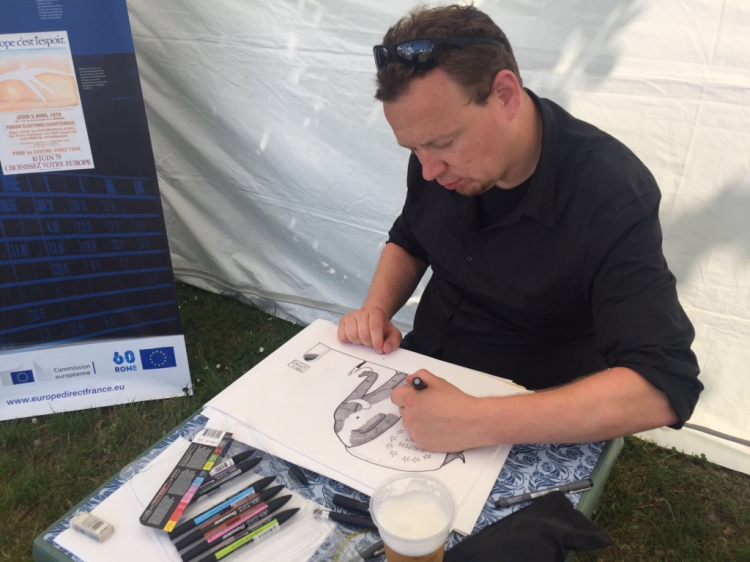 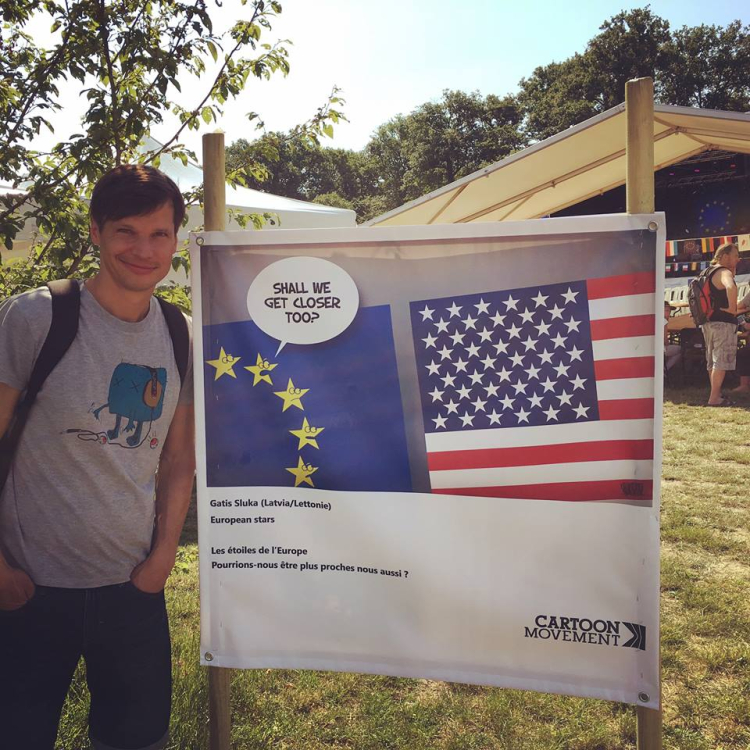 Gatis Sluka next to one of his cartoons. 70 cartoons were on display at the festival. 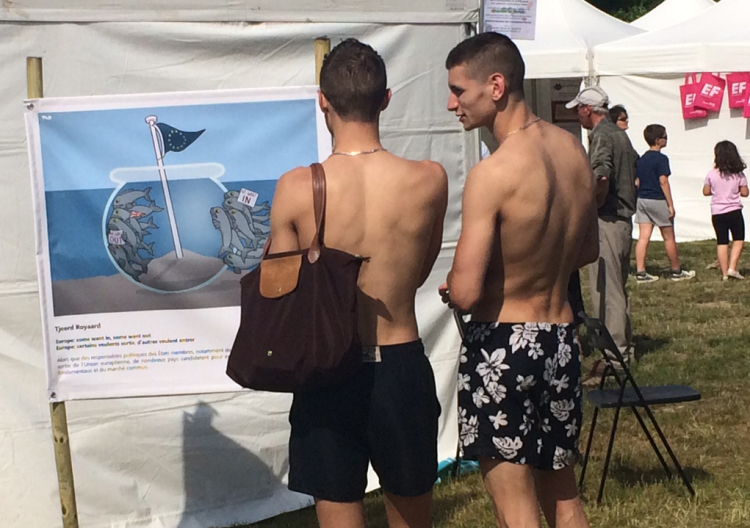 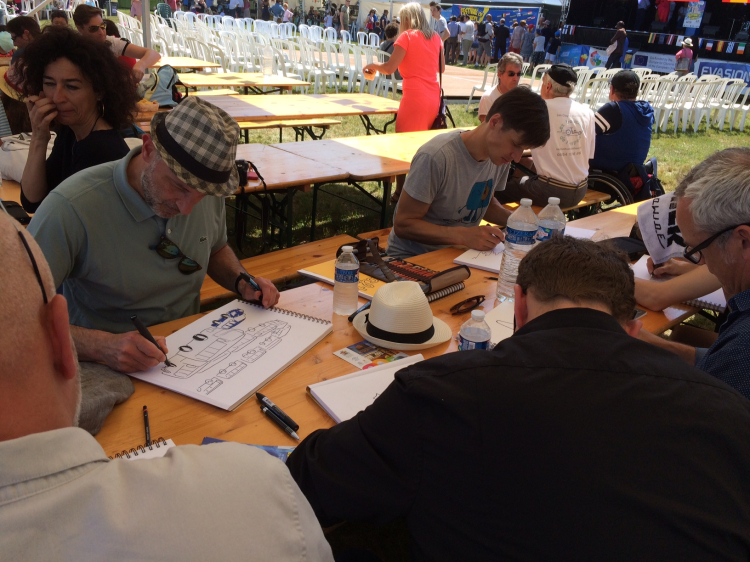 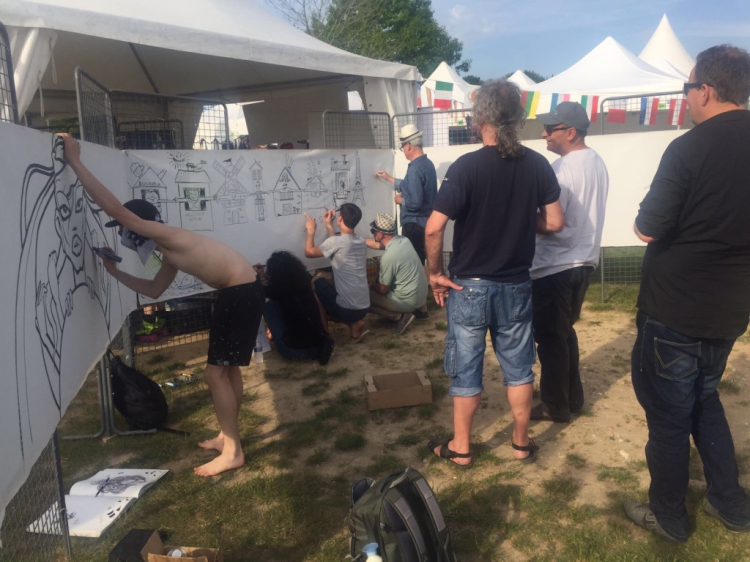 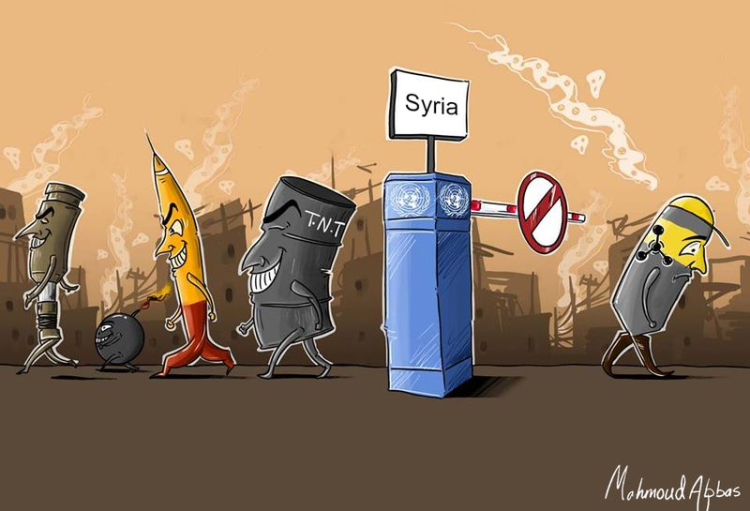 Mahmoud Abbas is a Palestinian cartoonist living in Sweden. Luis Buenaventura is a cartoonist, author, and tech entrepreneur from the Philippines. His cartoons often comments on technology's impact on culture; his artwork is inspired by Herge, Bill Watterson, and Geoff Darrow. Check out more of his work on his website. 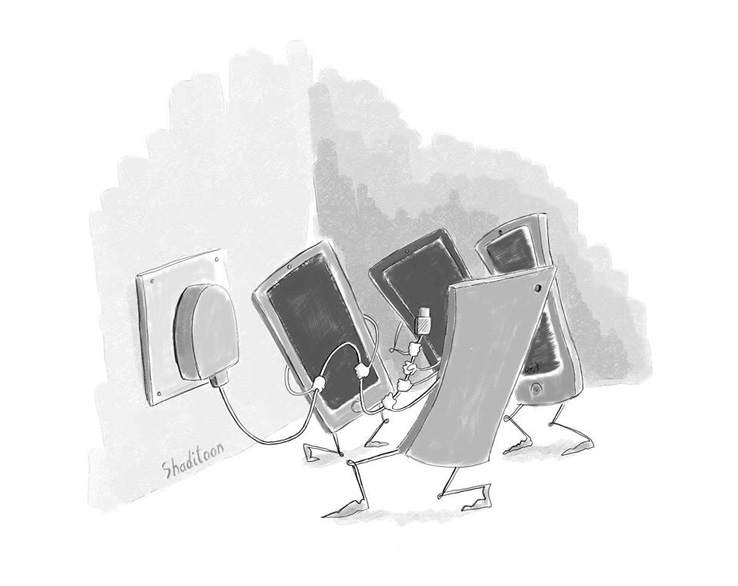 Shadi Alashoush is a Syrian cartoonist now living in Qatar. He has been publishing cartoons since 1997. Check out his Facebook page to see more of his work.

Cartooning for Peace has released a report on the situation of cartoonists worldwide 2016/2017: Whether their cartoons concern politics, the economy, sports or religion, cartoonists are confronted with the same threats as newspaper, radio and television journalists who cover sensitive subjects.

This report proposes a double approach: a country-based approach to contextualize cartoonists’ relationship to freedom of expression and an angle on emblematic cartoonists' cases.

Cartoonists defy threats in order to inform us on the state of democracy during periods of insecurity and trouble.

In a context where violations at freedom of expression have worsened, it is indispensable to give the floor to those who take up the pencil, in order to pay tribute to their stories and struggles and to thank them so that we do not close our eyes on what is happening in the rest of the world.

This report is based on the information collected by Cartooning for Peace’s watchdog and alert unit and the work of external contributors (Vladimir Vasak, investigative reporter for Arte; Jonathan Guyer, specialist on satire in the Middle East; Terry Anderson from Cartoonists Rights Network International).

The report is available in English here and in French here. 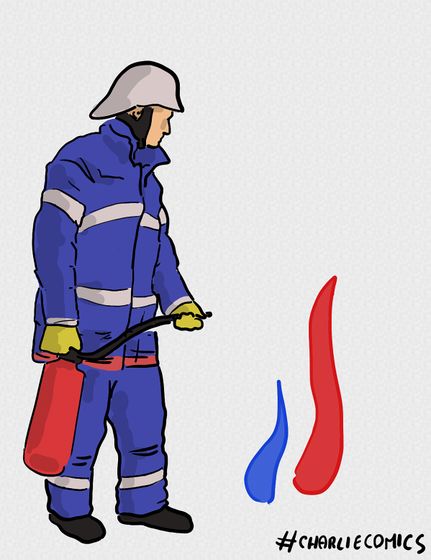 Carlo Casaburi is an Italian cartoonist from Ferrara publishing as Charlie Comics. Check out more of his work on his Facebook page.

The 2017 Press Freedom Index world map shows alarming levels of red and black, the colors used to indicate a severe or even total lack of press freedom. Countless journalists, many cartoonists among them, face a daily struggle against regimes that try to silence them. Today is World Press Freedom Day, and to mark this day we have selected 10 cartoons that remind us of the power of the media, the responsibility  of the media, and the importance of press freedom for freedom in general. 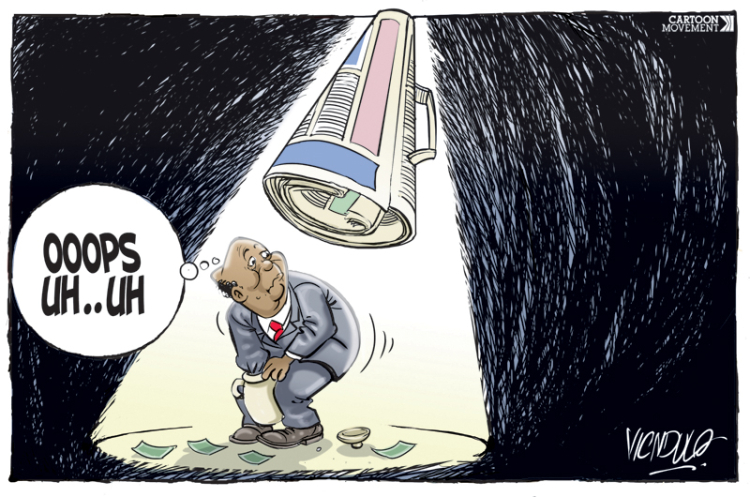 The main role of the media is to be a check on power, Victor Ndula reminds us. Journalists keep watch to ensure that politicians keep their hands out of the cookie jar. 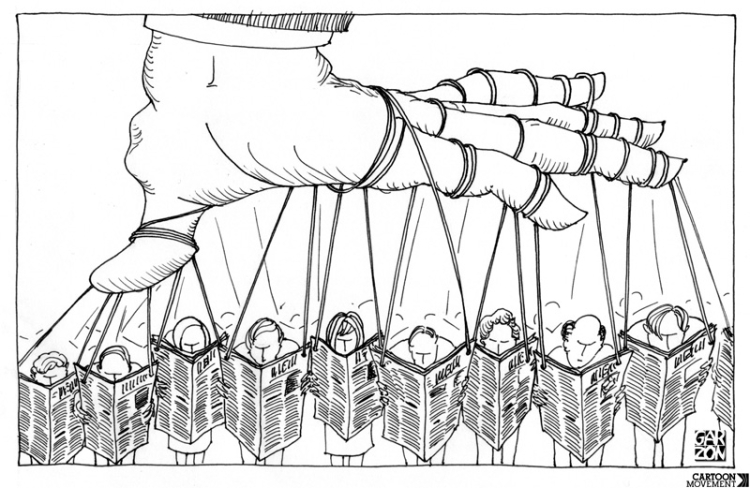 But to do that job, a free, independent and diverse media is vital. Because who controls the media, controls the people. Cartoon by Alfredo Garzon. 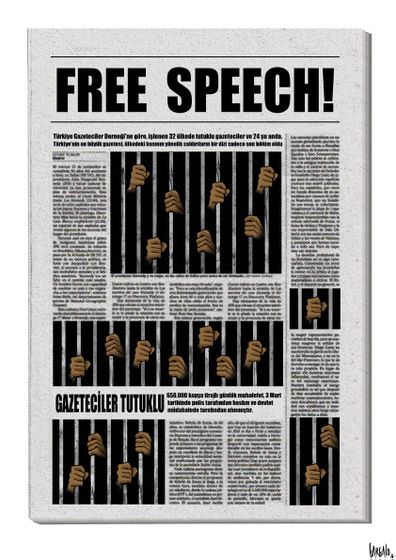 Many authoritarian regimes claims to support press freedom, a claim often contradicted by the inside of their prisons. Cartoon by Vasco Gargalo.

4. Why is Erdogan Afraid of Cartoonists? 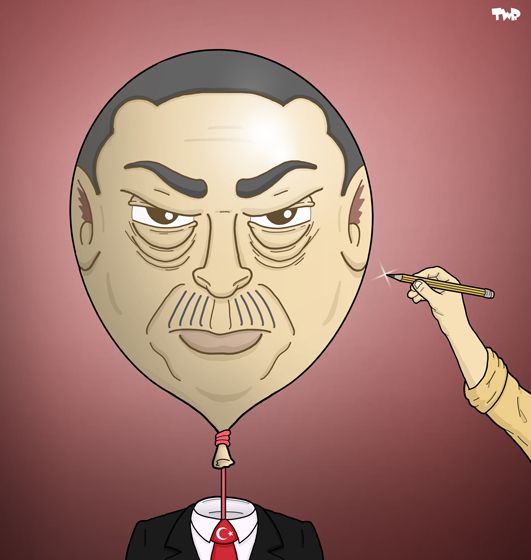 But why are authoritarian leaders so afraid of press freedom? Could it be the damage sharp pencils and pens might inflict on inflated egos? Cartoon by Tjeerd Royaards. 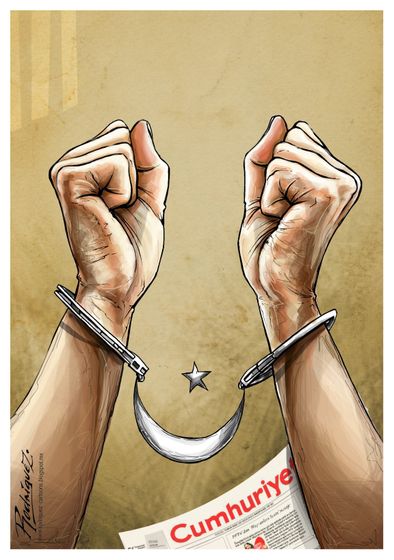 At present, Turkey is perhaps the most notable example of media oppression. Cartoonist Musa Kart and his fellow journalists have now spent over 6 months in jail. Cartoon by Antonio Rodriguez. 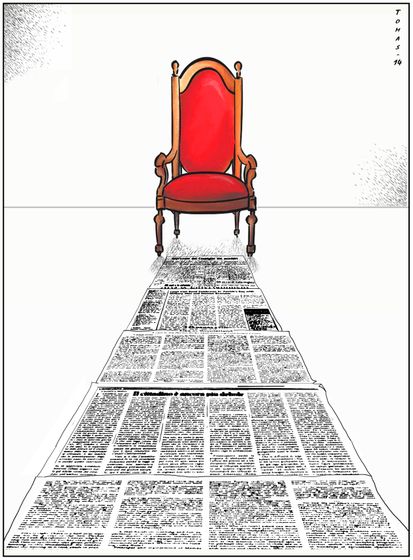 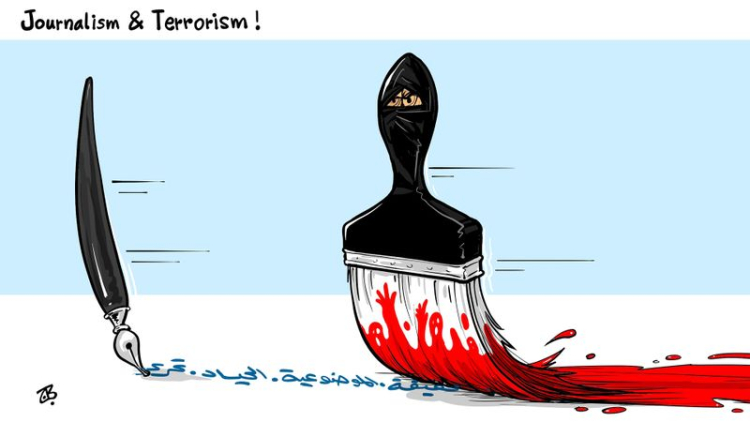 Another group that hates any kind of freedom, including freedom of the press: extremists. Cartoon by Emad Hajjaj. 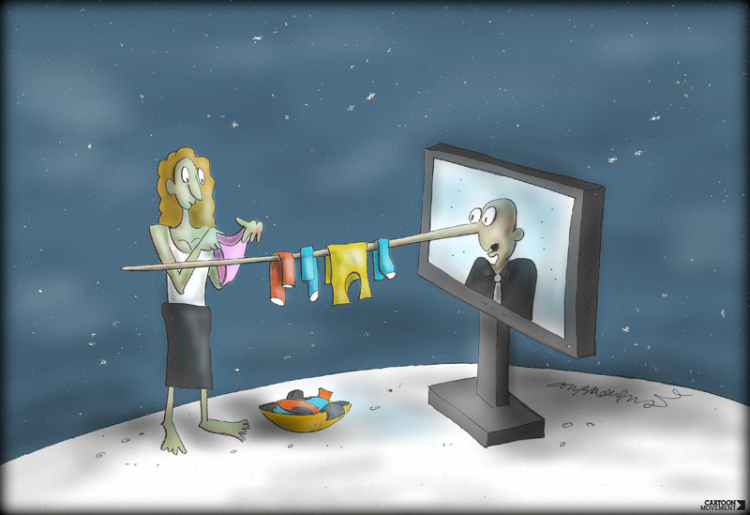 But oppression and extremists are not the only threat facing journalism. Fake news is undermining the trust that is fundamental for media to function properly. Cartoon by Dariusz Dabrowski. 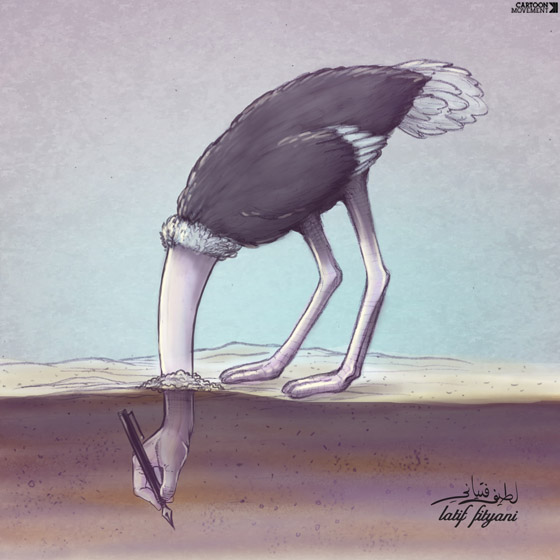 And media themselves have a huge responsibility to continuously search for the truth, to tell stories that need to be told, not just those that people want to hear, or that fit their chosen narrative. Cartoon by Latif Fityani. 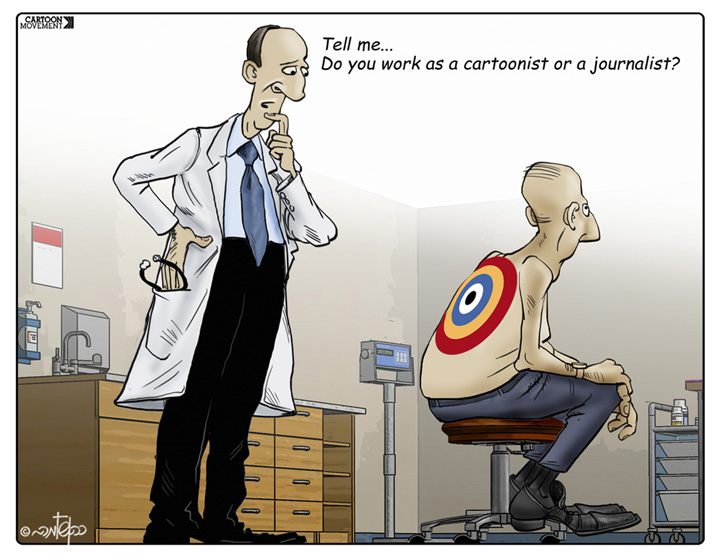 Journalism is still a dangerous profession, but arguably more important now than ever before. Cartoon by Shlomo Cohen.

If you want to see even more cartoons on press freedom, visit our cartoon collection.