Satire in the Trump Era

This post is a guest contribution by Italian cartoonist Emanuele Del Rosso.

Lately I’ve been thinking quite a lot about a Woody Allen’s sketch on Nazis, from the movie Manhattan. 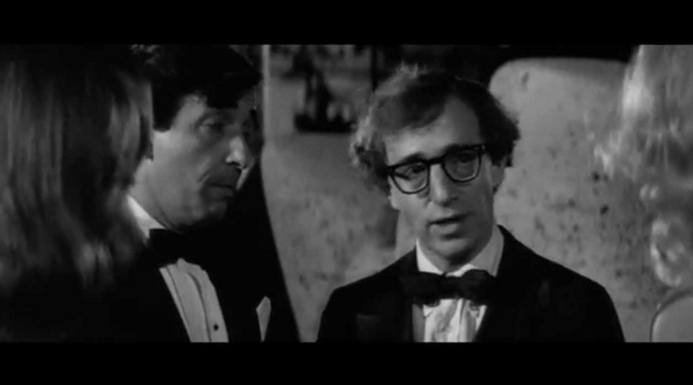 At the opening of an exhibition, Isaac Davis, the protagonist, is having a chat with some other guests, and says: “Has anybody read that Nazis are gonna march in New Jersey? […] We should go down there, get some guys together, ya know, get some bricks and baseball bats, and really explain things to 'em.” At this point another guest replies: “There was this devastating satirical piece on that on the op-ed page of the Times, just devastating.” And Isaac goes on: “ Whoa, whoa. A satirical piece in the Times is one thing, but bricks and baseball bats really gets right to the point of it.” Then the other guest sticks to her believe that satire “is always better than physical force.” But Isaac disagrees, saying: “No, physical force is always better with Nazis.”

I’ve been thinking a lot about this, lately. The sketch is a perfect example of what I believe satire is. The conversation suggests violence is better than satire to deal with Nazis, but, because this is a sketch, physical violence over Nazis is named, but it is never applied. The suggestion of physical violence is itself satire, as within the sketch it is suggested that Nazis are too stupid for satire to be effective. I found it really clever.

But the problem Woody Allen raises, the question if satire is effective on Nazis, still stands and takes the shape, for me, of this broader and trickier question: Is satire ineffective when applied to a certain kind of people?

Of course I believe in the power of satire – I’m a political cartoonist myself, I couldn’t think otherwise – in its power of making people think, pointing out the contradictions and ineptitude of the targets.

On the other hand, as Emily Nussbaum wrote in the New Yorker, it is jokes and humor that helped a neo-fascist strongman to sit in one of the most important – if not the most important – chairs in the world. “Nazis were humorless,” she says, and “jokes were a superior way to tell the truth.” But now all has changed, and it is easy to hide behind a joke, or to justify having said or done something awful by simply saying that it was meant as a joke no one understood. Say I'm insulting, as Berlusconi did, another minister, calling her a monkey for her African origins: a joke, dudes! Say I’m mocking a reporter with health problems, imitating his moves in front of the world, and say I’m the President of the United States: c’mon, it’s a joke! No one should take these things so seriously, and if you do you’re a humorless Nazi.

The problem is that, going this way, making political cartoons becomes a drag. It is true that with people like Trump in the Oval Office there will be material for thousands of cartoons, but the problem he poses for the effectiveness of such cartoons is, I’m afraid, quite clear.

First of all, it is impossible to mock him. Caricatures come too easy, because he is a real clown and people don’t care. After all, mocking someone's appearance is exactly what he is blamed for, so doing the same cannot really help – I’m surprised many cartoonists are not getting this. Concentrating on his on his wavy hair or his orange complexion is useless. Many satirists made this mistake, from The Simpsons to the New Yorker. He’s OK with that, everyone is OK with that, and rightly so. 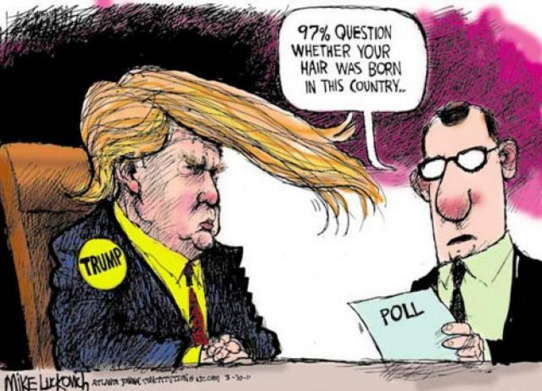 But then, there are other things that are not OK. On those, satire should focus. We can try to focus on his racism; or on his machismo; or on his xenophobia. But he’s so adamant and blatantly open about them that it is impossible to make people realize he has crazy positions. His racism sticks out like his shiny hair, ridiculous enough to become funny. His machismo is equally funny because of his unappealing appearance and makes him look like a loser. But a loser he is not, as he is the 45th President of the United States.

What he does, the danger he poses, is absolutely not funny.

We have moved beyond the realm of constructionism, where you bend reality to your believes, where what you say true becomes real. That was the position of the US administration under George W. Bush: America is a superpower and what we say is true, and you journalists have to comply to our standards of truth. Now we are in the realm of fake news, where nothing – or everything – is true, so what’s the point of getting riled up over some racism or some machismo? It can be fake. Power doesn’t shape reality, just messes with it in a comical way. Jokes are a weapon at the disposal of the bad guys as well.

Moreover, in the realm of fake news, satire can be fake too – or it can be applied on fake believes. It's useless to try to ridicule a fake character, overtly incapable of anything and still OK with that, and still voted in office by millions. It looks like there’s no shame in being dangerously ignorant and aiming for power. And this is, I have come to think, the big failure of the liberal intelligentsia – among which political cartoonists are often counted.

And so, what do you do with someone like Trump, or European leaders like Farage, Le Pen or Salvini, that is beyond satire? This is a real question, because I do not have an answer to this. Every time I want to draw about this topic, I find myself overwhelmed by the awareness that nothing will work, because we passed so many thresholds my imagination almost cannot cope. There is no grip on reality, and we seem to be OK with the monsters generated by the popular rejection of reason.

Again, a New Yorker cartoon summarizes how I feel. 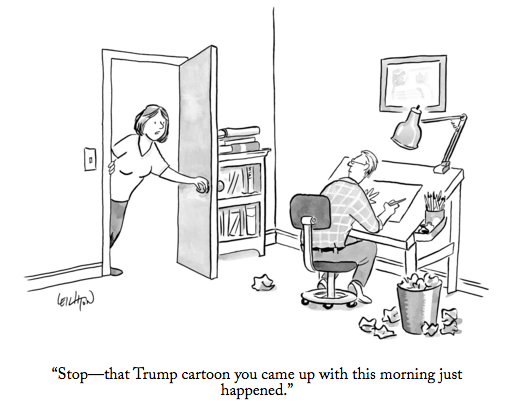 I often think about that Woody Allen’s sketch. I really do. And I ask myself if going on with intelligence, trying to find other ways of confronting this brain tumor that is tearing civilization apart, is the right way to go. Maybe these people are immune to intelligence. But maybe they are not immune to bricks and baseball bats.