Eaten Fish is the pen name of a 24-year old Iranian cartoonist currently interned in the notorious Manus Island immigration detention camp in Papua New Guinea. The camp is funded and overseen by the government of Australia. He is the recipient of the 2016 Courage in Editorial Cartooning Award. In September 2016, we launched a newsroom to produce cartoons in support of a campaign by Australian cartoonists to urge the Australian government to release Eaten Fish.

Unfortunately, he has yet to be released. Yesterday, the alarming news reached us that Eaten Fish is now on hunger strike. See the press release from Cartoonists Rights Network International below for more details. 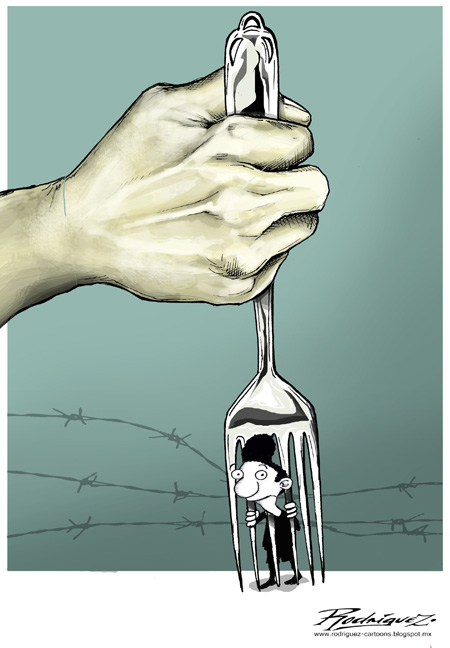 Eaten Fish has been on a hunger strike for 6 days now and weighs 48 kilos.  It has been well documented in the press that Eaten Fish suffers from debilitating mental health issues.  He has also been the victim of sexual assault, chronic sexual harassment and abuse within Australia’s immigration prison camp on Manus Island for the past 3 and a half years.

Due to his extremely fragile mental health and ongoing sexual harassment, Eaten fish has been held in the Special Supported Accommodation compound [also referred to as VSRA] for the past 8 months.

In a document from PNG Immigration and Citizenship Service Authority dated 29th of January 2017, it is stated that ABF have spoken to Eaten Fish and told him that his allegations of sexual assault and abuse have not been substantiated and that he will be returned to the compound and that PNG ICSA.  Worryingly it also states that they will not negotiate with Eaten Fish on any grounds.  It is this that has forced Mr Fish’s actions.

In an urgent letter to Australian Border Force Chief Medical Officer Dr John Brayley dated 2nd February 2017, Dr Sue Ditchfield writes: ‘Bizarelly he [Eaten Fish] was expected to prove the assaults to the satisfaction of PNG authorities.  He was unwilling to identify his assailants because of his fear of retribution and of course any assaults take place well away from the compound guards’.  Further those authorities Eaten Fish was to prove the assaults to were the same authorities who had assaulted him late in 2016.

In a letter to CMO Brayley Janet Galbraith writes: ‘ At the beginning of the hunger strike he [Eaten Fish] only weighed 53 kilos and he has already lost a substantial amount of weight. He reports to me today that he is shaky, weak, has a lot of body pain, no longer feels hunger, is losing his memory and his heart is beating fast.  He says he can no longer shower.’

When asked by authorities within the prison camp what he wished to accomplish through his hunger strike Mr Fish said:  ‘Something happens with hunger strike and I think you know what that is.  I will die and this will all finish’.

Cartoonists Rights Network International (CRNI) write: ‘It is with profound alarm and sadness that [we] learn that our friend and colleague, cartoonist Mr. Eaten Fish, currently held in an Australian refugee rendition camp in Papua New Guinea has decided to undertake a hunger strike... He is a man who has given up hope, cannot struggle any longer, cannot face the future that is being forced on him, and he would rather die than submit to the indignities of further inhuman treatment.’

The Australian government has been petitioned many times both from within Australia and internationally asking that Eaten Fish be brought to Australia for medical treatment.

Dr Ditchfield says, ‘I urge you to be pro-active in transferring this critically ill young man to Australia.  I have no doubt that failure to do this will lead to yet another death of an Asylum Seeker on Manus Island’.

Cartoons are speech made visible. I hope that his voice is not silenced -