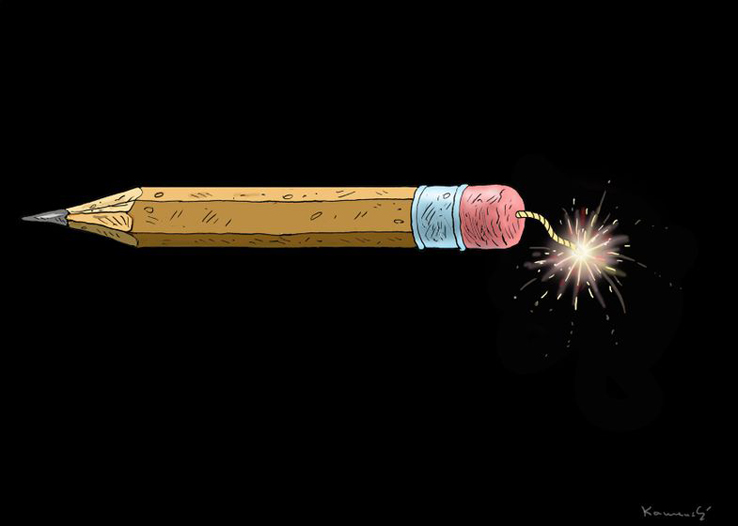 In 2015, we reported on FECO, the Federation of Cartoonists Organisations, and the questionable cooperation of FECO with the Iran House of Cartoon, one of the organizers of the infamous Holocaust Cartoon Competition.

In December 2016, FECO France decided to leave FECO and to change its name to France-Cartoons. Here is an excerpt from their statement, which can be read in full here.

You have all followed, with great interest or not, the gloomy affair of the holocaust contest organised by the Tehran House of Cartoons and the inappropriate presence of the international Feco president among the competitors. That second “Holocaust Contest” was directly targeting the green Charlie cover “All has been forgiven” and the sorrowful gatherings after the Charlie slaughter.

We asked for explanations from the Feco international board and succeeded in having the president resign. Elections were duly set up. It seems that the candidates list had neither been submitted to the Feco-France vote nor to the Feco-Israel one nor to the Feco-España one and perhaps some more. Those elections were rather odd since the former resigning president happened to become a vice president without having ever been a candidate.
After a unanimous consent at the General Assembly, we agreed we had to leave the Feco International.

After a great deal of thought by the PCO Committee and through consulting our members, PCO [UK] has decided to leave FECO forthwith.

This is a very sad decision, but has been brought about by FECO’s involvement with a Holocaust themed cartoon contest offered by the Iran House of Cartoon, known Holocaust deniers.

PCO cannot allow itself to be associated in any way with holocaust denial.

Perhaps, looking into the future, when FECO reorganises so that it is no longer associated in any way with holocaust denial PCO might apply to re-join.  In the meantime PCO intends to maintain good relations with individual cartoonists’ organisations such as France-Cartoon, formerly FECO France. But as of now we do not consider ourselves a member of FECO.

To our knowledge, FECO has not yet publicly responded.