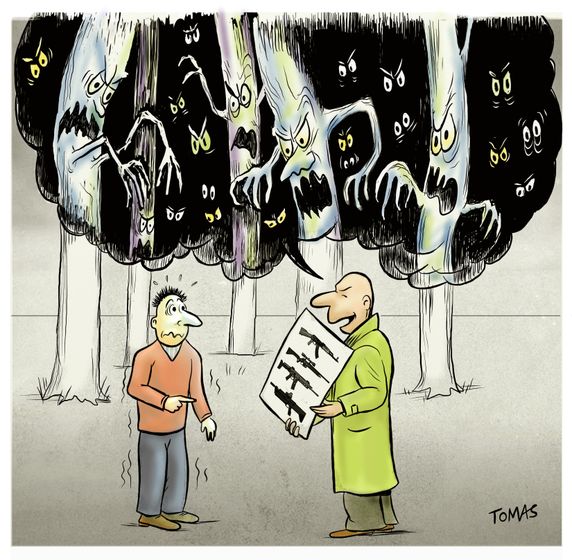 Fearmongering to justify the arms business. Cartoon by Tomas.

The World Peace Foundation has for some years been pursuing a project to expose the myths that are used to sustain a bloated, corrupt, and dangerous global arms business. We are teaming up with the WPF to produce cartoons that illustrate the 7 myths that sustain the global arms trade:

Myth 1: Higher military spending equals increased security.
Myth 2: Military spending is driven by security concerns.
Myth 3: We can control where arms go after they’re purchased and how they are used.
Myth 4: The defense industry is a key contributor to national economies.
Myth 5: Corruption in the arms trade is only a problem in developing countries.
Myth 6: National security requires blanket secrecy.
Myth 7: Now is not the time to challenge the global arms business.
(Bonus) Myth 7.5: Nothing can be done about it.

For a short explanation of these myths, read this PDF. For more information, visit www.projectindefensible.org. Check out all submissions in our project newsroom.

This is our second project with the World Peace Foundation. In 2012, we created a series of cartoons about peace in the 21st century, inspired by the visuals used by the international peace movement in the early 20th century.