Questions of copyright is a monthly feature in which we share some of our questions and concerns about how and where cartoons from Cartoon Movement are used without our permission.

This month, the US elections provided ample fodder for cartoonists, and media outlets proved eager to showcase how the world’s cartoonists responded to the unexpected win of Donald Trump. First, credit where credit is due: we know that CNN and Politico Europe both offered payment to the artists whose work they ran. CNN even commissioned the cartoons, asking several cartoonist beforehand to do a cartoon, instead of selecting the ‘best’ cartoons after the event, like the majority of media outlets do.

We’d like to see more media actually commissioning cartoons if they plan to show cartoons on a particular event, as this will help in making the business model for cartoonist that much more secure.

We’re not sure how many other media that published cartoons slideshows actually paid contributing artists, but based on our experience, probably not a lot. Here’s one example that might serve to illustrate the point we’re trying to make:

@NtheodoraK @indy100 Sorry we don’t allow free republication by other media. We feel that’s bad for the profession of editorial cartooning.

@NtheodoraK @indy100 If you have budget to pay a small republication fee, that’s another story of course. 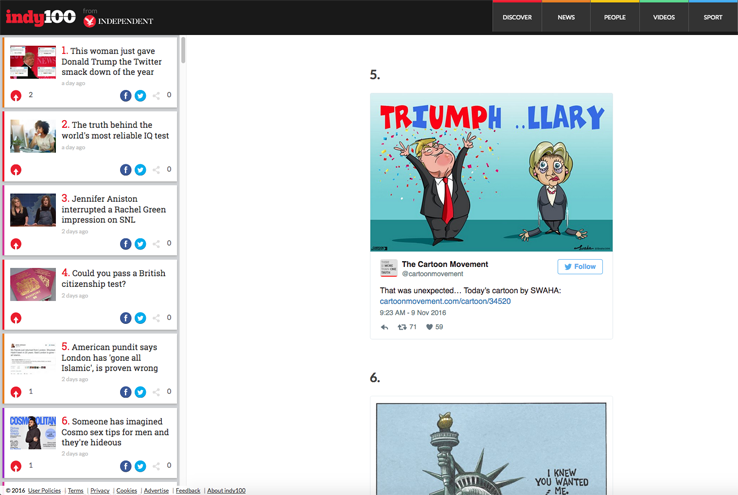 Granted, the journalist was probably only asking for permission to use the cartoon as the lead image above the article, which is the only image actually hosted on the website. The Twitter embed function is generally used without permission (like we do above, ironically). A lot of cartoon slideshows are now published this way.

Perhaps the journalist just did not understand that we meant we were opposed to the use of our cartoons by another media outlet for free in general. We can only surmise that our message wasn’t quite clear enough.

Another outlet that’s worth a mention this month is Euranet Plus. One of our cartoonists was very surprised to see on of his cartoons included in a video on Euranet Plus. Checking more videos in the EUphoria series produced by them (and cartoons posted on the page with each video) we could not help but notice a lot of familiar cartoons. We of course assume that they have asked all the cartoonists for permission to use their work (and simply forgot one), but they have yet to respond to our inquiries.