Tribute Cartoons Are Great, But… 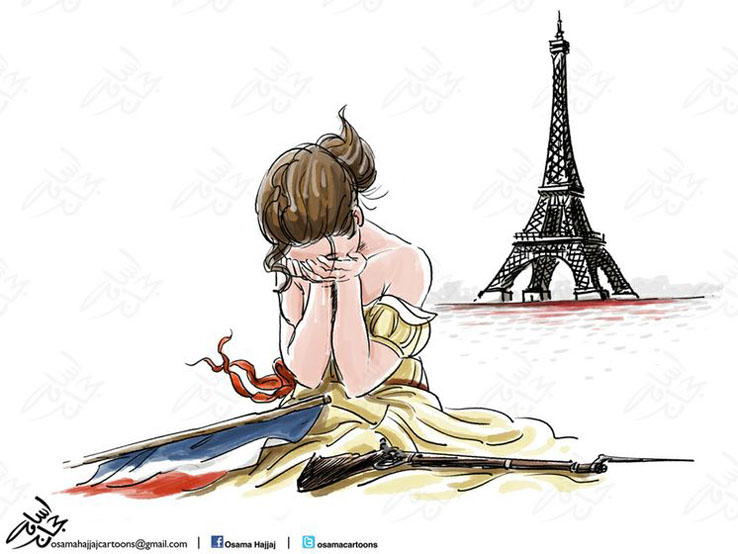 2015 has been a year of tribute cartoons. In January, the attack on Charlie Hebdo sent shockwaves through the cartooning community and I do not know cartoonists who did not do a cartoon to pay tribute to the fallen cartoonists and to condemn the violence. Then in September a three-year old Syrian boy washed up on the Turkish shore to become an icon of the failure of Europe to deal with the refugee crisis. Again, many cartoonists (including me) felt compelled to pay homage. And one week ago today, the horrendous attacks in Paris sadly presented us with yet another opportunity to express our outrage, our support and our grief.

Cartoons can work tremendously well in expressing the emotion many of us feel in the face of incomprehensible events such as the Paris attacks. Media also realize this and have been especially quick this year to turn to cartoonists to provide visual commentary when anything big happens.

Perhaps a little too quick.

I understand the need for media to respond quickly to events; as part of the media, this is true for cartoonists as well. But in their hunger for ever more eyes, ears and clicks, I get the feeling media now expect us to have a cartoon ready within 30 minutes from the news breaking. Some cartoonists tackle this problem by publishing older work that still applies (as a cartoonists builds an archive over the years, you’d be surprised how much is reusable). Others are truly able to come up with great ideas in this very limited time-frame and produce some stunning visuals, for example the cartoon by Osama Hajjaj used to illustrate this post. But I’ve also seen a lot of bleeding Eiffel towers.

Don’t get me wrong. I’m all for tribute cartoons. Part of the role of cartoons is to capture and summarize public opinion and a tribute cartoon does exactly that. But cartoons are also meant to offer something more: to reflect on an event, to offer commentary, to raise forgotten or uncomfortable points. And there are points to be raised in the wake of the Paris attacks. How will this terror attack impact the refugee crisis in Europe? Will Europeans become (even more) hostile towards refugees? Towards Islam? Why are the Paris attacks followed by a a global outburst of support, while attacks in other places (e.g. in Turkey in October) receive far less attention? Are some lives indeed worth more than others? And to what degree are we ourselves to blame for the terror threat on European soil by decades of meddling in the Middle East? The list goes on. Painful, uncomfortable questions, but questions that need to be asked nonetheless.

There are cartoons that attempt to raise these questions, but so far media seem to prefer bleeding Eiffel towers.