Last week, I was fortunate enough to attend the National Arts Festival in Grahamstown, South Africa, the biggest art festival in Africa. I was there by invitation of the Embassy of the Netherlands in South Africa, a co-sponsor of Think!fest, a series of lectures at the festival. The theme this year, with the attack on Charlie Hebdo in mind, was satire. As part of our international Peace & Justice project, I joined forces with one of South Africa’s best cartoonists, Jeremy Nell (also known as Jerm), to talk about the importance of satire. 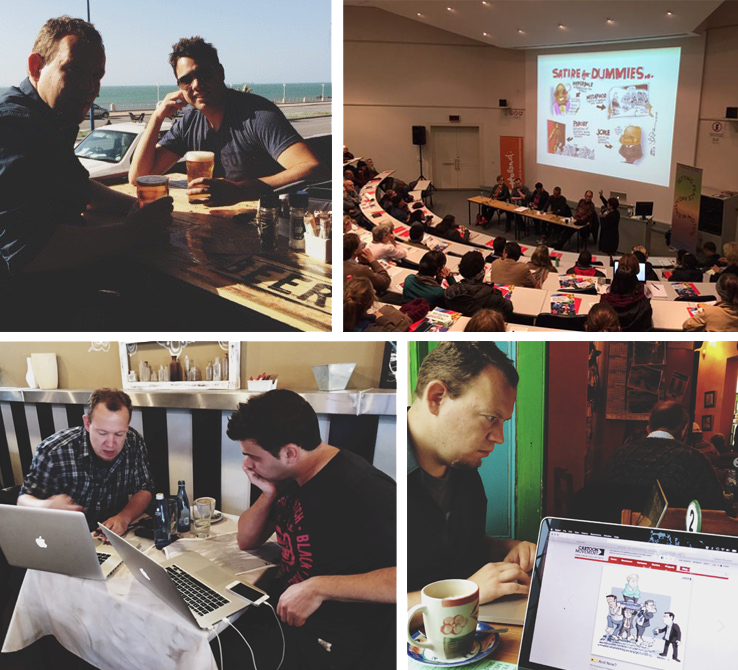 In preparing our talk, Jeremy and I decided that we would like to focus on the limits of satire. We wanted to reflect on the use and misuse of stereotypes in cartoons, the way cartoons can fight but can also reinforce prejudice, and explore what is taboo in South African and Dutch society.

In South Africa, cartoonists have to tread very carefully when they deal with race and religion. And while Jeremy thinks that a cartoonists should be able to poke fun at anyone, mocking Nelson Mandela is a no-go. Jeremy is probably the most hard-hitting cartoonist publishing in South Africa. He consistently pushes the boundaries of what you can mock. He’s also known to use stereotypes in his work, and sometimes this gets him into trouble. But controversy does not always come from where you expect it. 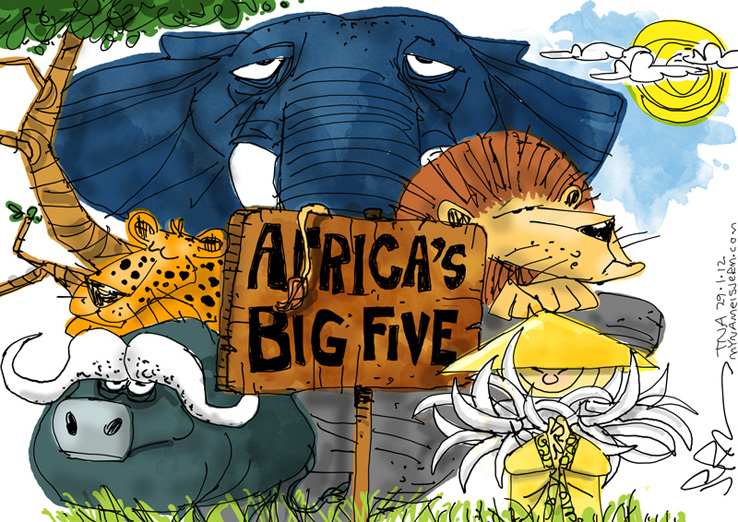 The cartoon above featuring the big five, with the rhinoceros replaced by an Asian carrying a stack of rhino horns, was published throughout South Africa and in the US without any angry response. Then, when it was entered into a competition in Germany, it was rejected in the final round on the grounds of being racist. When Jeremy was told the stereotype of the Asian was crossing the line, he simply replied: 'How did you know it was an Asian?’ Because although stereotypes can reinforce existing prejudices, they are also an important tool for cartoonists, who rely on a collective visual language to connect their work with the audience.

Here is some more work by Jeremy that was considered controversial in some way or another:

Dutch society is also no stranger to taboo. Dutch anti-Islam cartoonist Gregorius Nekschot was apprehended by the authorities in 2008 for allegedly spreading hatred with his very provocative cartoons on Islam in what many still consider to be a political arrest. Another big taboo in the Netherlands is anything related to Hitler or the Holocaust. Comparing anyone to Hitler will virtually always cause a big controversy.

Geert Wilders is perhaps the most (in)famous Dutch politician. He is vehemently anti-Islam and his proposed measures to combat what he calls the ‘Islamization of Europe’, such as a tax on the head veil that Muslim women wear, do invite social satirists to compare him to a certain German politician that targeted a particular part of the population. Wilders has gotten so annoyed by being compared to Hitler, he came out last year with the statement that he would sue anyone who would make this comparison. This statement was, of course, great material for cartoonists. But how to approach the subject without actually getting sued? Below is an explanation of a cartoon I did on the matter, that did make a Hitler reference, but did not actually get me into trouble:

But another cartoon did get me into trouble. Last year, I was asked to make a cartoon about Islamic State for Boomerang, a company that provides free postcards that are distributed to bars, cinemas, theatres and restaurants in the Netherlands. I decided to make a cartoon that would not focus on IS exclusively, but was a critique of religion in general. As I mentioned earlier, controversy often comes from where you least expect it. I this case, it wasn’t angry Muslims rallying against the cartoon. Instead, Christians were outraged that their religion was being compared to IS. 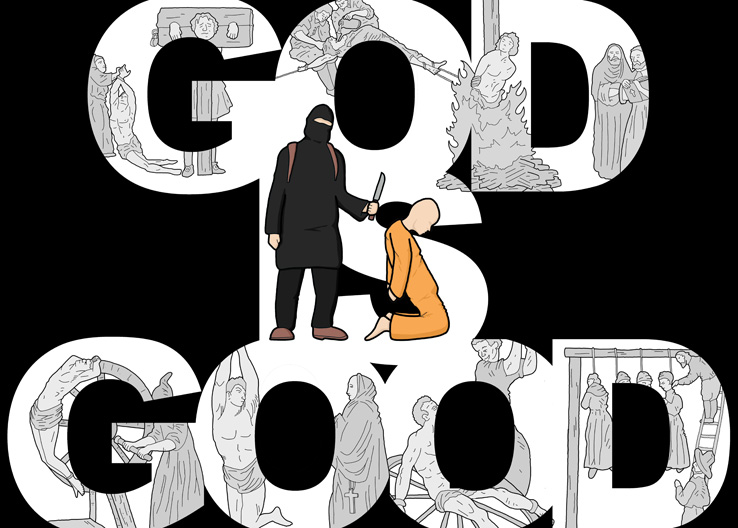 So how does all of the above relate to our cartoon project on peace and justice? It seems counterintuitive, but insulting and provocative cartoons do actually have a role to play when it comes to creating a peaceful and just society. Because we can only create a fair society if we are allowed to debate what we consider to be the wrongs of that society. And sometimes you need a bit of controversy to make people think about issues that would be ignored otherwise. And as cartoonists, creating controversy is part of our job description.