The Fundamental Right to Insult? 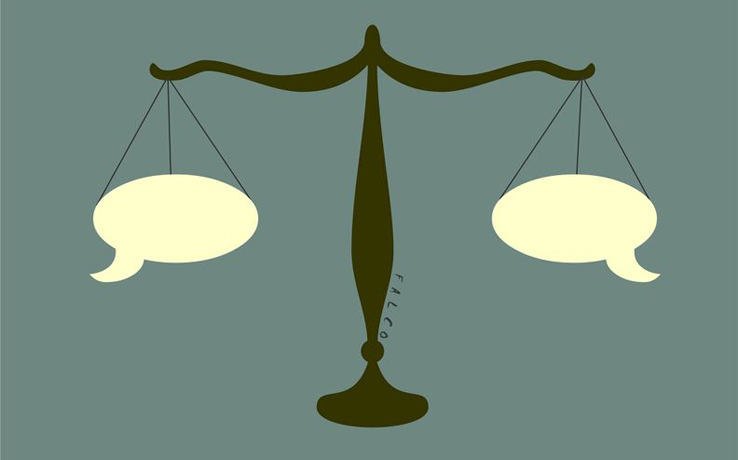 Following the attack on Charlie Hebdo, I’ve been prone to introspection regarding my chosen profession. Well-known US cartoonist Daryl Cagle has referred to cartoons as the ‘flashpoint for a clash of civilizations’. I’m not sure I agree. Using terms like ‘clash of civilizations’ immediately excludes the possibility that there is common ground between ‘civilizations’ or that there is room for debate. And I think we should be weary to define press freedom and freedom of speech and opinion as examples of Western moral superiority.

The single most valuable experience I had in the week after the Paris attacks was talking to a classroom full of high school students in the Netherlands to discuss freedom of speech. I want to share the gist of that discussion here, as I think it provides valuable insights. Not insights in who’s right and who’s wrong, but insights as to how we should debate the issue.

The class was a mix of Dutch students, and students descended from immigrants, most of them Muslims. The Muslim students were confused, and angry. They felt (and perhaps rightly so) that Muslims and Islam were consistently scorned and ridiculed by the rest of society. Why should people be allowed to insult them and their beliefs?

The reality in Europe is that we live in mixed societies. Although some groups of people would like to change this, people of immigrant descent are here to stay, and immigrants will probably continue to settle in Europe. With them come different customs and beliefs. Part of living together in one society with different groups is to accommodate one another. To be tolerant and respectful. But another, equally important part, at least in an open society, is the ability to be frank with one another, to question each other’s actions and principles, to debate. This public debate serves to answer one ongoing question: what kind of society do we all want to live in?

Part of the public debate is also the right to insult. To prohibit this would be a fundamental breach with the notion of free speech. Because who knows what is insulting to whom? Sometimes insults are a necessary tool to call into question power structures like religions. And sometimes they are just insulting. But you can’t have one without the other.

But there is another side to the discussion, raised by the students in the classroom, as well as by other Muslims I talked to over the past months. A healthy public debate is one in which every group has an equal place at the table. Many Muslims feel that their place is far less than equal. They feel they lack the capacity to respond to insults, to take part in the debate.  So when do insults become so one-sided and frequent they can be considered bullying?