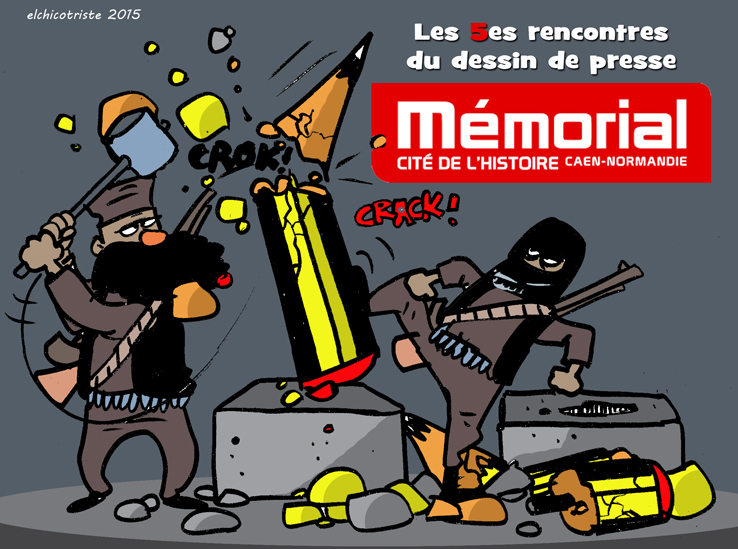 Yesterday, the Memorial de Caen decided to cancel a big cartoonist conference scheduled for April, because of safety concerns. The Memorial is a World War II museum in Normandy, France.

The Memorial has hosted a yearly meeting of French and international cartoonists for 4 years. This year, the fifth edition, would be the biggest one yet, with 44 cartoonists from all over the world coming together to discuss the profession and to remember our fallen comrades from Paris. But rising security concerns, such as more than six attempts to hack the Memorial’s website in the past month, forced Memorial director Stéphane Grimaldi to cancel the event.

Washington Post cartoonist Ann Tellies (one of the would-be attendees) writes she fully understands the reasons of the Memorial for cancelling, but is angry nonetheless:

I was angry about the cancellation because it again reminds me of the Paris murders and the senseless violence which is now a sad fact of my profession. I have said repeatedly ever since the Danish cartoon controversy in 2006 that there is no justification for violence if one is offended by a drawing. You can criticize, reject, ignore, protest, or draw your own opposing cartoon but threats and violence are not justified for any reason. Ever.

Spanish cartoonist Elchicotriste responded to the news with a cartoon, which you can see above. In his opinion, the cancellation is giving in to terrorists and thus bad news for the profession.

Personally, I am first and foremost sad that this is the new reality for cartoonists. We don't get to meet up that often, and this would have been a great opportunity to get together with cartoonists from all the corners of the globe, including several CM-members.

I do understand the decision to cancel. As host, the Memorial is responsible for the safety for 44 cartoonists. In his email, Stéphane Grimaldi writes that the meeting could only take place with far-reaching security measures. He rightly (in my opinion) asserts that this is not the spirit of these meetings.

Let’s hope this cancellation is merely a postponement, making it a very temporary victory for those who would threaten our freedom.