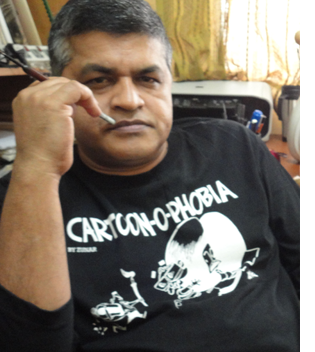 The Malaysian government is causing trouble again for cartoonist Zunar. Last month a Malaysian appeals court overturned a government ban on two of Zunar’s books, but last week three of his assistants were arrested for selling his cartoon book. Yesterday, he informed us the police has open up new investigation against him under The Sedition Act:

12 Nov 2014 (8 pm Malaysia time): I received a call from a police officer in Kuala Lumpur to inform that they are investigating me under The Sedition Act. I need to report to the police station next week. According to the officer the investigation is relating to my latest cartoon book, but he did not say which one.

Earlier today, my webmaster who helps me operate my official website, www.zunar.my was summoned to the police station. Last week, three of my sale assistants were arrested for selling my latest cartoon books "Conspiracy to Imprison Anwar" and "Pirate of The Carry-BN".

I will call for a press conference tomorrow and will issue a full statement after that.

Needless to say we will continue to follow the case.