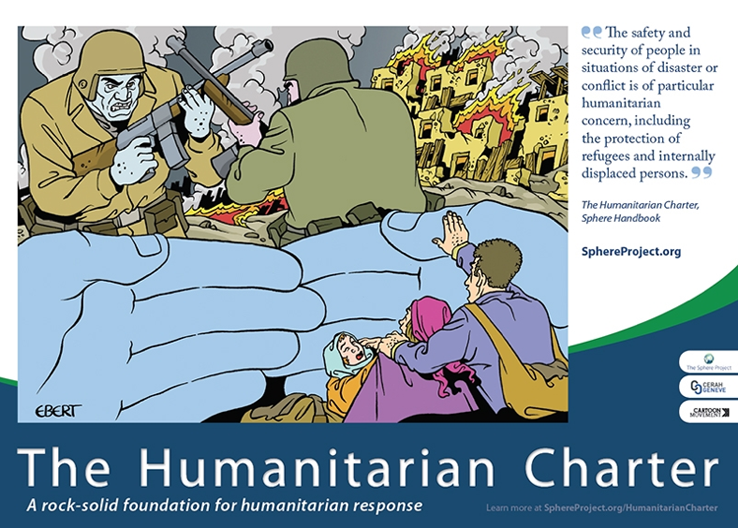 One of the six posters used in the campaign, with a cartoon by Italian artist Enrico Bertuccioli.

Last year, we produced a number of cartoons for the Sphere Project, to be used in a campaign to raise awareness of the importance of universal standards in the field of humanitarian aid. It has taken some time, but this week the campaign was launched. The Sphere Project has published a series of six posters and six matching postcards featuring humanitarian messages illustrated with cartoons. The posters and postcards are available in Arabic, English, French and Spanish.

"With this campaign we would like to highlight the crucial role and value of the Humanitarian Charter within the architecture of Sphere principles and standards," says Linda Poteat, Sphere Director ad interim.

Poteat hopes that the posters and postcards "will help increase the awareness of the Charter among the community of Sphere practitioners and encourage them to study it with greater attention, as it's really the foundation on which the Sphere building rests."

Read more about this project and see all the poster designs on the website of the Sphere Project.
Also on their website, you can find out how to obtain a set of posters and post cards; they are free (only shipping costs apply).