'Bad News is My Opium'

Afghan cartoonist Mehdi Amini on his addiction to political cartoons, the legacy of Karzai and the bleak future of Afghanistan. 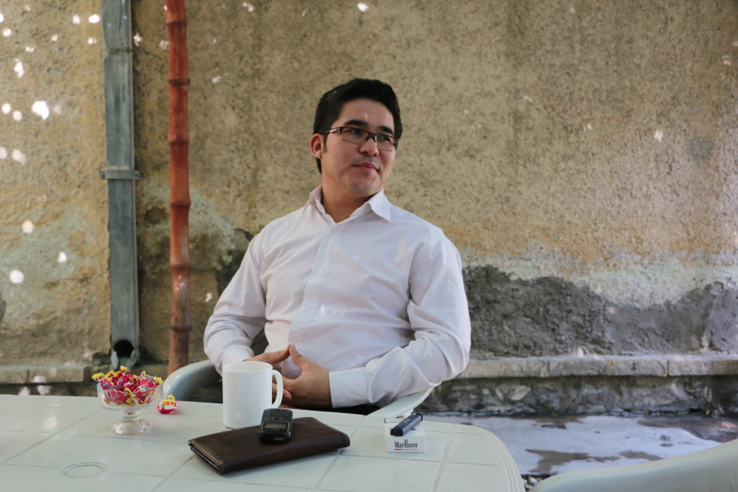 Mehdi Amini works as an architect for the World Bank and as a political cartoonist. Photo: Lotte van Elp

After a long and bitter electoral battle in Afghanistan, Hamid Karzai is stepping down as President. Opinions about his legacy are divided. Mehdi Amini (32) is an architect, but he's been making political cartoons about Karzai for years, in secret. Now, he is speaking out against the regime for the first time: 'Karzai has protected dangerous warlords. It is the Taliban who profit.'

'Bad news is my opium', says Mehdi. Opium is code word in Afghanistan for anything with an addictive effect. 'I get high on a suicide bomber or political blunder. Making a cartoon about it is my only way of getting sober again.' His high can last several nights. For years, Mehdi's cartoons would disappear in a secret folder on his computer. 'I made them only for myself, to keep me sane. Not to show to the world.'

Afghans are still unfamiliar with political cartoons, but this might change soon. After the fall of the Taliban in 2001, thousands of highly educated young people from countries such as Iran, Turkey and the United States returned to Afghanistan. In major Afghan cities more and more young activists are coming together to vent their frustrations with writing, poetry or painting. Ambitious and progressive Hazaras like Mehdi often take the lead in these groups.

Hazaras are a Shiite minority in Afghanistan. For centuries, they were considered the dregs of society and they became victims of mass killings by the Sunni Taliban. After 2001, they took their fate into their own hands. Now, they are the people that study hardest, get the best grades and land the top jobs.

Mehdi's biggest frustrations are also the protagonists in his cartoons: President Karzai and the Taliban. Mehdi knows that time is short: if he ever wants to show his cartoons to the world he cannot afford to wait any longer. This year, Hamid Karzai will step down and the international military forces, the Taliban's greatest enemy, will withdraw. These developments will soon make his work outdated.

But Mehdi decides not to publish. He has enough on his mind as an architect and young father. Also, safety is a serious issue when you plan to put up cartoons that mock the long beards and bare butts of the Taliban on walls around Kabul. Then suddenly something happens that changes Mehdi's mind.

March 20 was New Year's Eve in Afghanistan. Well-known Afghan journalist Sardar Ahmad takes his family to the Serena Hotel to celebrate the beginning of Persian year 1393. The Serena is known to be a fort in Kabul, surrounded by thick walls and protected by snipers. Four Taliban teenagers walk through the security checks as Sardar sits with his family at a table. They retrieve small guns from their socks; a bloodbath ensues. Sardar, his wife Humaira, daughter Nelofar (6), son Omar (5) and six others die. By a miracle, his youngest son Abuzar (2) survives the drama.

Mehdi is in Kabul with his son, also a toddler, when he hears the news. He gets beside himself with rage, a bad trip this time. Balaatar az siyahee rangi nist – Things cannot get any more black. Murdering children, the Taliban had crossed a line. 'I imagined sitting in the Serena. It could easily have been me.' He stays up all night to work on his darkest cartoon to date. 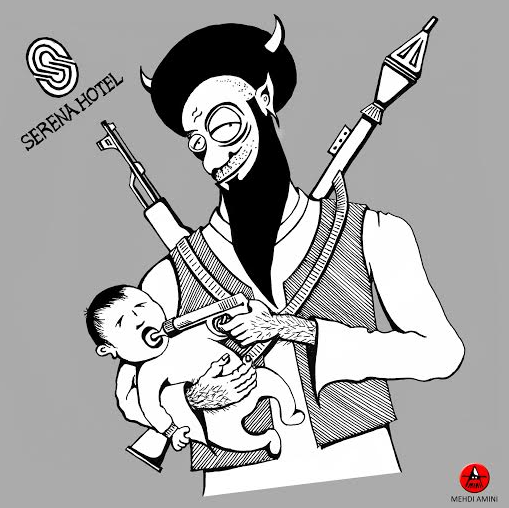 The cartoon Mehdi published online after the attack on the Serena Hotel.

On a whim Mehdi decides to put the cartoon on Facebook. Even his best friends are amazed when they find out about his double life. 'The situation in Afghanistan has deteriorated so quickly, simply drawing the madness away was not enough anymore to clear my head.'

'I looked at my son and could only think: how will his generation ever understand what we have done to each other here? Can my cartoons help?' His friends believe that they can. They encourage him to seek an audience for his work. For the first time, Mehdi is making plans to exhibit his work in Afghanistan.

The legacy of Karzai

Mehdi was born in Iran. His parents call him crazy when he moves to Afghanistan in 2006; they gave up everything to just get as far away as possible. But Mehdi is ambitious and knows he has no chance at a career in Iran because of his refugee status. Friends that traveled to Afghanistan before him told him there are are opportunities there.

'It seemed like a fantastic prospect. Finally a president that would build a future for me and for all Afghans.' Along with Mehdi many Afghans have high expectations when Karzai takes office in 2002. People believed he would be the champion who, backed by trillions of dollars of international aid, would build a new and democratic Afghanistan.

12.5 years later, that belief is gone. The Taliban has reinvented itself under the rule of Karzai. In the first half of 2014, there were over 5,000 civilian casualties in fighting in Afghanistan, among them many women and children.

'When six people are killed in a suicide attack my friends say khair khairiat, it's fine, nothing new. That's why I started drawing. With every cartoon I put a needle in my arm. Feel it, feel it, Mehdi, this is really happening, this is where you live now.'

At the end of Karzai's second and final term, cynics say that his greatest achievement is that he has not been blown up by the Taliban himself. Optimists think it is a miracle that Afghanistan hasn't slid back into full civil war already and fear that in time, people will look back to Karzai's rule with feelings of nostalgia.

Mehdi always draws Karzai with a sweaty forehead and a frumpy, startled look. 'I want to show that Karzai was not in control of the situation in the past decade.' When Karzai became president, he had to deal with powerful warlords that could do as they please under the Taliban regime and in the turbulent times before. They were sometimes willing to shave off their beards, but never to give up their power. Karzai decided to appease them and to involve them in the reconstruction of Afghanistan. In Mehdi opinion, this cost him dearly: 'He was powerless against the influence of dangerous strongmen, especially from the south of Afghanistan, Karzai's home region where the Taliban is strongest.' 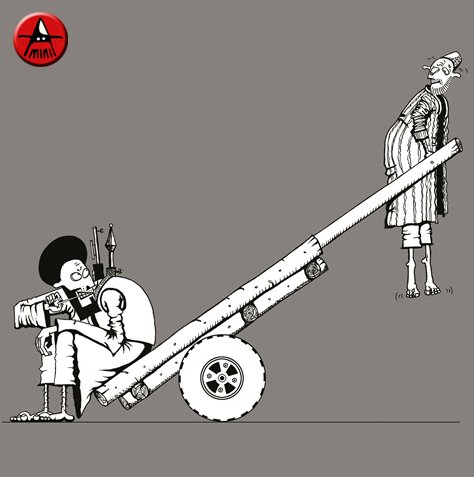 Karzai also approached the Taliban and tried to negotiate with them. 'What a joke. Of course, the Taliban are cheating because they have absolutely nothing to gain from peace and security. The organization has a core of extremists, but many terrorists hide behind harsh words about religion. They murder foreigners, but make no mistake. They are not fools. They can only maintain their power and money using the Taliban as their cover.' 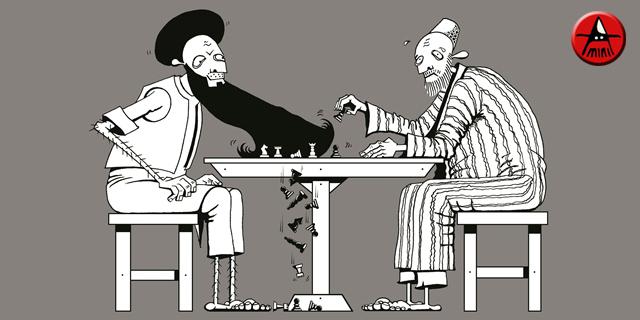 According to Mehdi, it's no use negotiating with the Taliban.

'The longer the beard, the smaller the brain.'

'Of course I'm exaggerating in my cartoons. Not everyone with a beard in Afghanistan is retarded. In fact, I know hardcore Taliban who work at our ministries with clean shaven chins . What I want to say is, you must be very stupid to be mad at everything and everyone that's different from you. Taliban are angry at other countries, women, religions, and so on. The list is long.'

The word is out

A French institute in Kabul will host a five-day exhibition of Mehdi's work. The Lycee Esteclal is a stone's throw away from the Serena Hotel. The traffic chaos in Kabul forces you to drive alongside the wall of the Serena Hotel at walking pace for at least ten minutes. It's a tense drive for Mehdi to the opening of his exhibition on August 23.

The opening is very well attended. Guest (mostly Hazara) are searched and their bags inspected. The institute has a large theater that can function as a safe-room. In the event of an attack hundreds of people can camp here for days. Bottles of water and dried food lie waiting. 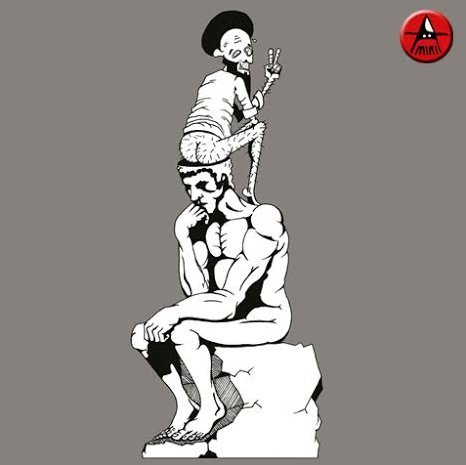 His cartoons about the Taliban caused turmoil on Facebook in the days after the opening of the exhibition.

The major Afghan TV channel 'Tolo TV' is also present. Millions of people see Mehdi and his cartoons on the evening news. The word is out. The day after the opening Mehdi's cartoons go viral on social media. The comments are divided. In some comments, Mehdi is praised for his courage, while in others, he is condemned to death for insulting religious extremists.

Mehdi is now looking for an international audience. Rehab doesn't seem necessary any time soon.
The election campaign lasted nearly six months, due to fraud allegations. The infighting has not served Afghanistan well. The Taliban took advantage of the power vacuum and the economy has ground to a halt.

Sunday, September 21, the two remaining candidates announced they will share power. No democratically elected leader, but a political deal made behind closed doors.

Mehdi jokingly compares the results with CatDog, the animated series about Siamese cat / dog-twins with completely different characters. 'Our leaders will only be engaged with each other, quarreling, and forgetting their people. They will never make important choices, they are too different to agree on important decisions. Actually I have already lost my confidence in these men. If they truly cared for Afghanistan, they would never have turned the electoral campaign into such a drama.'

Perhaps the only upside of the long-delayed elections: Mehdi has had plenty of time to get the features of the new president and prime minister down. Specific traits, such as the sweaty brow of Karzai, have yet to take shape. But Mehdi has the basics in his fingers: I have practiced drawing sideburns, noses and the shape of their faces until my fingers bled. I thought: if we ever get a new president, I want to be ready.'

After the attack on the Serena Hotel, Mehdi joined Cartoon Movement. You can see more of his work here.