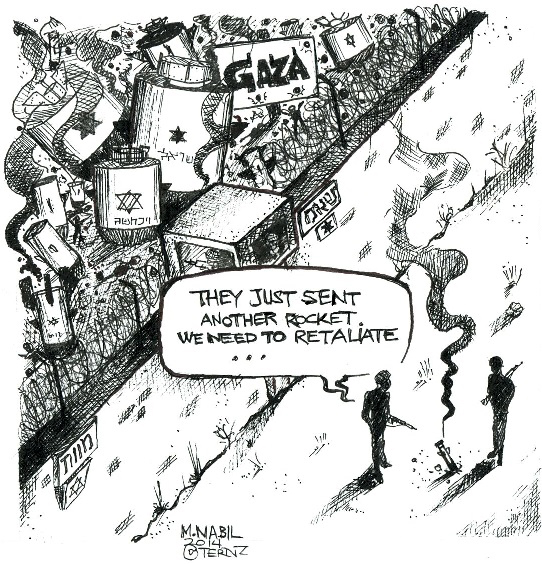 Mohammed Nabil is an editorial cartoonist from Alexandria in Egypt.

Each year, Cartoonists Rights Network International hands out the Courage in Editorial Cartooning Award to a cartoonist in great danger who has demonstrated exceptional courage in the exercise of free speech rights under extraordinary circumstances.

This year, for the first time, the award is given to two women cartoonists. Globally, women only constitute 10% of the political cartooning population. The recipients are Indian cartoonist Kanika Mishra and Palestinian cartoonist Majda Shaheen.

One of Kanika's cartoons, depicting Asaram and his unwillingness to face a narco or polygraph test to prove his innocence.

Indian cartoonist Kanika Mishra, a resident in the city of Mumbai, was selected for her valor and exercise of free speech during a time of great peril. She received numerous threats from followers of a local holy man, Asaram Bapu, who were enraged at the humorous and focused cartoons she drew of his illegal sexual exploits. During this period she received phone calls from Bapu supporters threatening to kill her and her family.

When Kanika got word that popular cult leader Bapu had been accused of raping the 16-year old daughter  of two of his followers,  she reacted in the most powerful way she could. Four hours after hearing that there was a police manhunt for Bapu, Kanika tweeted and posted to her  Facebook page  a cartoon tweaking Bapu supporters’ blind faith in their guru. Kanika followed her post with more cartoons, one of him being hauled off to jail.

Reaction to Kanika’s cartoons was immediate. She soon began receiving requests for interviews from India Today and India’s most watched news channel, Aaj Tak. Following the media interest, a groundswell of new threats from Bapu's supporters broke loose. Throughout the siege by Bapu’s supporters she continued to take on Bapu's outrageous hypocrisy through her cartoons.

We did an interview with Kanika in February; for more background visit the CRNI website. 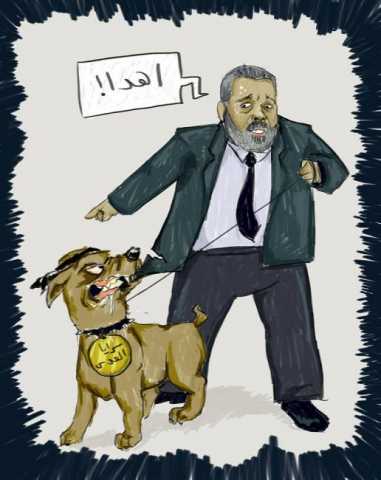 The award is also given to Palestinian cartoonist Majda Shaheen. In her cartoon, she depicts her view on the relationship between Ismail Haniyeh the senior political leader of Hamas and the Al-Quds Brigades.  Angered by the cartoon, the official website of the Al Qud Brigade asked for details regarding her whereabouts in hopes of scaring her and her family. One site featured a picture of someone with the same name, with the word 'Execution' placed on it. Following numerous death threats, Majda Shaheen withdrew the cartoon from her Facebook page.

Majda is a member of Cartoon Movement, you can see more of her work here.

This year’s ceremony will take place on October 11th in San Francisco, California USA during the annual convention of the Association of American Editorial Cartoonists from the 9th to the 11th. 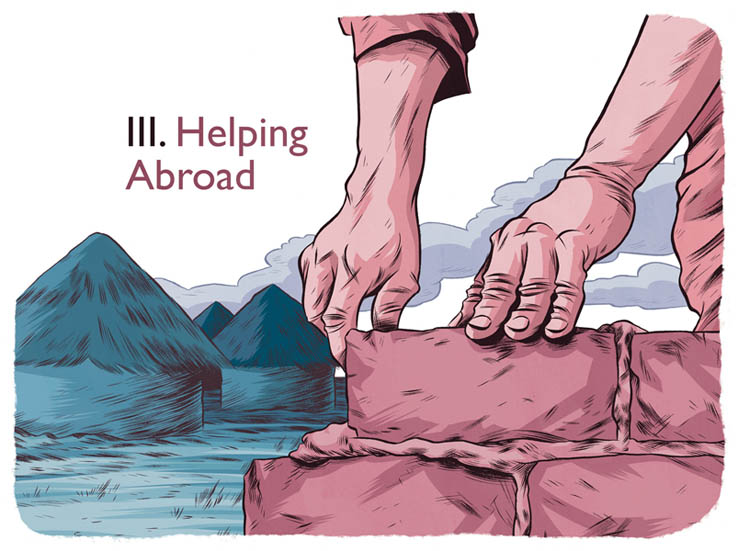 This Wednesday we publish the third chapter of 'A Century of Silent Helpers', our comic about the history of Dutch development organization Cordaid within the context of the rise of development aid in the 20th century.

Cordaid is a catholic organization; missionary work is an important part of its history and the foundation of modern catholic development aid. In the 1960s, the Netherlands had over 9,000 active missionaries all over the world, more than any other country. In chapter 3, we tell the story of one of them.

Drawing Attention: Cartoons on the Environment

Next month, Cartoon Movement will be present at the Americas Latin Eco-Festival, an event that aims to strengthen the voice of the Latino community on issues relating to climate change and environmental justice. The festival takes place in Boulder, Colorado (USA) from 11 to 15 September.

Our contribution is an exhibition titled 'Drawing Attention: Cartoons on the Environment'. It will feature 250 cartoons: an exhibit of 50 physical cartoons and an additional digital presentation of 200 cartoons, bringing together perspectives on sustainability, pollution, resource scarcity and social and environmental justice. A lot of the contributing artists come from Latin America, but there is also space for perspectives from the rest of the world.

Featured most prominently will be the graphic work of Cubal artist Alex Falco Chang, whose bold images do not need words to convey a powerful message. 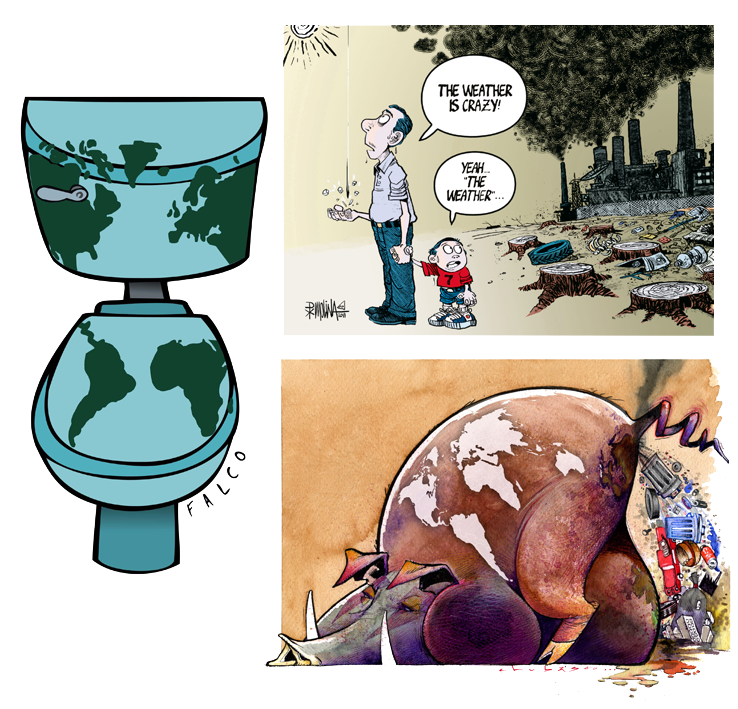 Some of the cartoons that will be on display at the exhbition, by Falco (Cuba), Pedro X. Molina (Nicaragua), and Chubasco (Mexico). 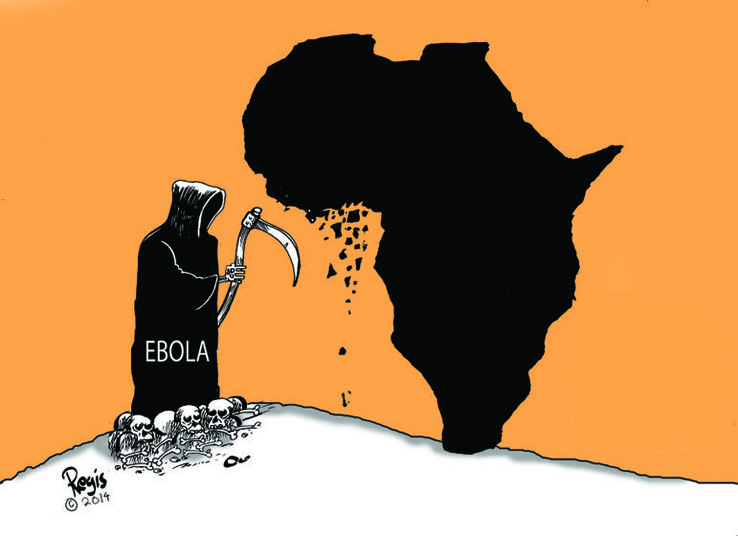 Simon Regis is a cartoonist from Tanzania who works for 'The African' and 'Mtanzania'. 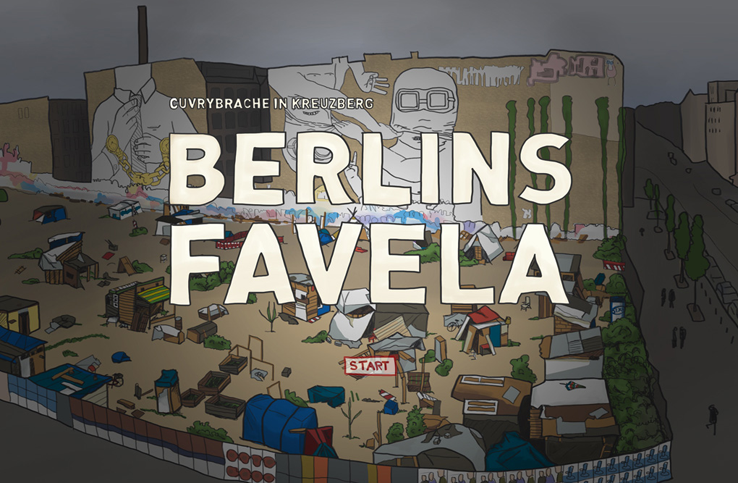 We're back from our summer break, and we have a new comics journalism production lined up for next Wednesday (August 13). In earlier comics we explored the favelas of Rio de Janeiro and the tent camps of Haiti, but it turns out that Berlin also has its very own favela, in the middle of Kreuzberg.

'Berlins Favela' is an interactive comic report that was made by Julia Severiens as a graduation project the Köln International School of Design in Cologne, Germany. It is based on a report by Nik Afanasjew. The original German version of the comic was published by Berlin Newspaper 'Der Tagesspiegel'.