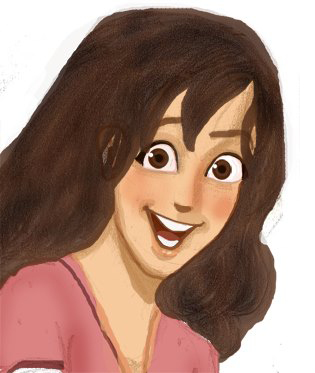 Kanika is a 33-year old illustrator and cartoonist from Mumbai. Last year, she created the female cartoon character named Karnika Kahen, and started a series of cartoons that criticized the controversial Indian godman Asaram Bapu. Asaram is a high-profile guru, who has made the news with a remark that the 2012 Delhi gang rape victim was equally guilty along with those responsible for the sexual assault on her. In 2013, he was accused of sexual assault on a 16-year old girl himself. Kanika decided on a female protagonist because she felt there were already a lot of cartoons in India with a 'aam aadmi' (roughly translated 'average Joe') perspective. It was time for 'aam ladki', the female equivalent.

Kanika: 'I don’t see representation of a girl’s voice in the field of Indian cartoons in our times. We have many famous male cartoonists , but not one female cartoonist. It shows that women are still not considered mature enough to make a political or social comment, at least in the world of cartoons. I want to change that. I feel that a woman cartoonist can raise issues concerned to females in a better way. Its not only about the issues related to females only but representing the voice of the women of our country on social and political issues.

Karnika Kahen, the cartoon character, was born when I was feeling very angry after reading the news that Asaram had sexually abused a minor girl. Asaram, the same man who few months back gave this statement that Nirbhaya, the unfortunate rape victim of the Delhi bus should have  called those monsters 'Bhaiyaa' who raped her or she should have recited the 'guru-mantra' to save herself from that disaster.

One of Kanika's cartoons, depicting Asaram and his unwillingness to face a narco or polygraph test to prove his innocence.

Within one week IndiaToday and Aaj Tak picked up my cartoons and published a story with my interview. The editor didn't publish the cartoons with my original name and used the name of character in the article , maybe because she already saw what is coming next.

Asaram’s blind followers were already after me when I started publishing cartoons related to him on Facebook but once the cartoons got published in India Today and Aaj Tak, they started coming  in hordes and started abusing me severely. I have not heard or read such kind of language before in my life. They even started making derogatory cartoons about me. 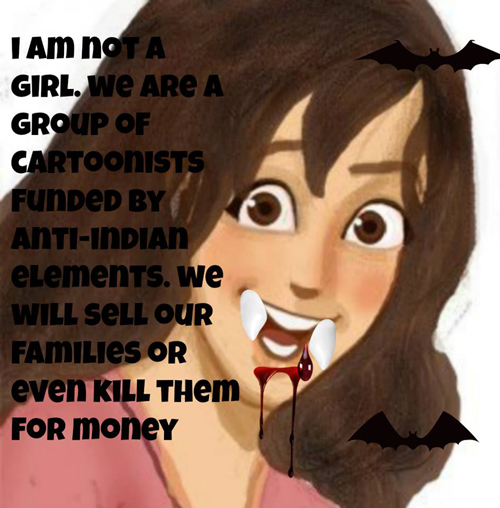 One of the derogatory cartoons that was made, using Kanika's cartoon character.

Some of them even threatened to kill me. They told that they would  give me the same treatment which Nirbhaya faced.  They hacked my Facebook , email accounts and got some of my photographs from there and they started distributing those here and there. I was very scared. For months. I didn't come out of my home. I was so afraid that I was not able to sleep properly. But, I kept making cartoons on Asaram until his blind followers got tired and stopped threatening me. I filed a complaint in Mumbai Cyber Crime Cell and local police station. I got lots of support from people in all over the country  and other cartoonists. It helped me to continue my fight against these blind followers.

After I filed the police complaint in Cyber crime cell and local police station, the number of threats gone down gradually but sometimes I still receive calls from unknown numbers which I generally don’t pick. The fact is that Godman Asaram and his son is in jail right now, so I believe that the number of their followers have gone down. But they are still using my cartoon character and running a fake Facebook page in my name.'

Kanika goes on to note that, despite the threats, creating this comic series has shown just how important cartoons can be, and has rekindled her love for cartooning.

Thanks a lot!I am so happy to get such kind of support!