Cartooning in Libya: A Soft Target in Murky Waters

Nabil Fannoush contributes a daily comic strip to the independent daily The New Libya. Although his comic has received mostly positive reactions, radical religious, tribal and militia elements have been hostile to what he's drawing, and have even attacked to newspaper headquarters. He is currently residing in Canada to study, and has been urged by the newspaper editor-in-chief to remain there for the time being. We talk to him about the state of cartooning in Libya.

Are there many cartoonists in Libya, and did this number grow after the fall of Gaddafi?

'I think you'd get different answers depending on who you ask... For me the answer is no in both cases. As far as I'm concerned the late Mohammed Alzwawi was the only cartoonist Libya ever had and is a great loss because the culture of media and information is very underdeveloped here, and I consider cartoons to be more media than art. There are some artists whose drawings are published in newspapers, and the artwork is very good, but to me if they do not address issues and identify with the readers and their daily lives then they're not cartoons. It doesn't help that many of the artists copy Alzwawi's drawing style, but that is just my personal opinion.'

Why and when did you start doing comics?

'It's a bit of a long story, and for me personally quite an unhappy one at times, but I'll try to make it brief: drawing in caricature used to be a hobby of mine as a boy, and I used to participate in exhibitions all the time. I always wanted to be a professional cartoonist, but  as I got older I began to understand that the regime heavily censors media, making Libya a hostile environment for cartoons.

I did not think it was right to negotiate the integrity of what I say through my drawings and tailoring them to suit the regime's standards, so I focused on earning a degree in computer science (and currently study and work in that field), but I still drew on request from NGOs and local causes without signature. I often drew anonymously when a subject bothered me enough. God knows I was fearful for myself at times, but it was fear for my family's safety that prevented me from drawing openly at the time. I had no right to endanger them.

After the fall of Gaddafi, an acquaintance of mine who is familiar with my work introduced me to Faisal Alhammali, the chief executive of Libya Aljadida (The New Libya) - which I consider to be the first truly independent Libyan newspaper since the sixties -  and a long time unknown soldier for free Libyan press. Mr. Alhammali asked me if I was interested in drawing a daily cartoon for their paper. He did not want to enlist any of the known artists drawing for other papers because he shares my views regarding their work and he wanted something different. The concept of a daily strip featuring a central character is a new one for Libya, so I showed him a strip I've been working on in my spare time: Faraj Yawmi, a young Libyan professional struggling with the difficulties of daily Libyan life. Mr. Hammali liked it, and the newspaper has been publishing the strip exclusively since then. I believe that around 300 episodes have been published so far.'

'One hope is that I give the average Libyan, who for decades was and still is suffering from marginalization, a voice that can be heard over the noise from the plethora of Libyan media that serves private interest and political agendas and not the public good: they ignore the daily suffering of ordinary people. Another thing I aim for that is the more daunting task of appealing to them for awareness and tolerance, which sadly are in short supply in Libya right now. People need to understand that they need to compromise on things and tolerate each other and differing views for the overall benefit of their country and put aside prejudices and short term personal gain.'

You have received threats because of your work. What is the situation for you at the moment?

'There have been a number of threats,  though my cartoons are in general well received. When they first started I was actually shocked and surprised by them and by the several attacks on the paper, the last of which caused a great deal of damage.

My work is not offensive in any way that I can perceive, that's not what it's for. I almost never refer to a particular person or entity, just occurrences and mentalities in a vein of cheeky humour; I take great pains to make sure that any cartoon is not taken out of context in that way, and the newspaper editors go through them to make sure. Also even if I do cross some line by accident I do not see any need for such an approach, as I have a policy of openness and availability to readers to hear complaints or grievances, and if anyone is offended to my knowledge I would make an effort to seek them out first to assure, appease and accommodate that person, so there is no need for militancy.

Certain extremist and fundamentalist elements for some reason I do not understand do not respond to my approach and efforts at dialogue and appeasement, and that saddens me, but there really isn't anything more I can do for them, and I see no reason to stop drawing for not accommodating radical views I can in no way foresee. All I can do is continue and hope for the best. If I am able to give even the smallest of comfort for a few ordinary people it's worth the risk.' 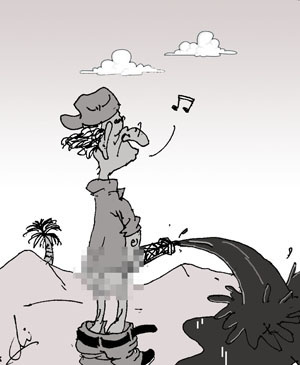 Nabil: 'This image is the original ending I wanted for the strip, as I felt it a more powerful message, but I was afraid that people might focus on the taboo aspect and miss the point... So instead I used a more "socially acceptable" drawing, and provided the Facebook page with the original ending so that it would be shown by request only.'

Is it dangerous to be a cartoonist in general in Libya?

'It can be at times, unfortunately. The danger now is different from that of an oppressive regime and carte-blanche security apparatus, and in a way more sinister. It's the opposite extreme of armed lawlessness and fundamentalists-religious, ethnic, tribal or otherwise- who are answerable to no one but themselves. They need not fear accountability for any act, including murder and genocide. Unless a cartoonist becomes part of the problem and aligns with the militias and their agendas for protection (at the cost of integrity and serving the public), he or she is a soft target with little or no protection from a very weak state.

Even something as insignificant as misunderstanding a cartoon's plot can turn tragic: while I was away the newspaper premises was attacked because a shopkeeper of a grocery store somewhere in Tripoli somehow thought that a strip I drew was about him personally, and to this day I am still bewildered as to how he came to that conclusion and why would he then commit such an act.'

Is there censorship or are there taboos (subjects you cannot draw about) in Libya?

'Not officially, but there are, quite a lot of them and someone forgot to print the manual. To me it's not the fact that there are taboos that's the main problem, it's the rather murky, unclear and often contradictory views on what can be said or not. The general definition of 'Taboo' in Libya right now is 'something that displeases someone'.  It is mostly religiously fanatic groups taking advantage of the post-war chaos in Libya  that are most dangerous to a cartoonist armed with ink and a pencil.

A lot of the complaints are things that I cannot in any way foresee. For example, a few weeks ago I was inspired to draw a cartoon about traffic and fuel consumption when I saw a young Tripolitanean lady going to work on a bicycle. Suddenly some people said I was "offending religion" by drawing (or in their words encouraging) a woman on a bicycle. This was considered "improper".  I wasn't given any clear explanation for why I was offending the faith by drawing a woman on a bicycle even though women in Libya drive cars and walk out in public late at night . You can see why at times it can be quite frustrating, but I must be patient with these people, keep reaching out  and hope they reach back.'

The pen may be mightier than the sword, but machine guns might prove to be more of a challenge for people armed with just ink and pencil. People like this should be provided support and protection from the international community... We can learn something from cartoonists like this whose work aims for awareness and social unity as opposed to others who only draw to inflame reaction.