The Hidden Power of Innocent Lines

Fiestoforo is a cartoonist from Chile now residing in the United Kingdom. His work forcuses mainly on injustice, and the many forms it takes. We talk to him about how he works, and about the cartoon as a form of protest. 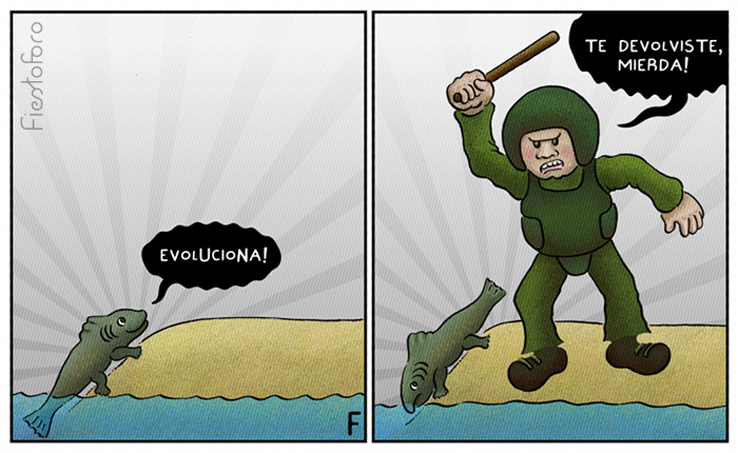 Fish: Evolution, here I come! Police officer: Back off , you piece of shit!

What does your artist name, 'Fiestoforo', mean?

'Fiestoforo is a compound word meaning “he who carries the feast”, from fiesta or “feast” in Spanish and phoros, bearer in Greek, in the same way as the name Christophoros, but without the Messiah part.'

How and when did you become a cartoonist?

'I started to do cartoons a couple of years ago and published them on the internet. Through internet networking I was invited to join a group of political cartoonists. It was a gradual process that took some years. At the beginning I only drew for practice to become a better artist. Later I realised you can convey powerful ideas through cartooning.'

'The first stage of my process could be described as more traditional. I make a sketch with pencil, which is inked using a nib pen. Then, in the second stage, I resort to new technologies. I scan and colour the drawing using an open-source software called GIMP. I use a tablet for adding texture to the colours. Regularly, it takes a couple of hours to finish a cartoon.'

'By trial and error, using several tools and materials, I chose those I was more comfortable with. Observing works by renowned artists and their techniques must have influenced me too.'

'Being a simple and efficient way to express a political view on any matter, it is difficult to find a cartoon that does not elicit any kind of response from the viewer. Therefore, I think they are powerful means of communication, disguised as innocent lines on a surface.'

Your work focuses on indigenous rights, intercultural relations, social movement, and environmental affairs. In the Arab World, the Arab Spring seems to have shifted the role of political cartoon; stencilled on walls and signs they have almost become a form of protest. How do you see this development?

'What I have noticed is that people are recognising the power of symbols. Regularly they are used by governments and institutions to foster their beliefs and values and published on common items, so common that you do not even realise their presence. For example,  in Chile, the military dictatorship in the 80’s had coins bearing the image of lady liberty as if she had just broken a chain with the date of the coup d'état marked. Back then the image was quite solemn, but today when you look at it, it seems naive and in bad taste, specially because you realise what they were trying to do. Now I think people are occupying and displaying their own symbols, probably because it is quite simple and straightforward to share images on the internet.'

How do you see the future of political cartoons?

'The immediacy of information and communication is affecting political cartoons. If a cartoon is published days after an event, it may even seem outdated. Therefore, I have noticed that on the internet you can see reactions in the form of political cartoons minutes after an significant event occurs. This may affect the way political cartoons depict opinions, because the focus is on yielding a quick response, instead of reflecting on the events to craft a well-thought piece. Obviously, there are examples of both approaches.'

If the cartoon will be used more and more as a form of protest, is there a future for professional cartoonists (meaning cartoonists that can earn a living from their work)?

'I think there is. A professional cartoonist has developed a set of skills based on knowledge and experience. If you know about composition, design, colour schemes, analysis of discourse, etc. you will better to convey your ideas, and the result would be more pleasing for the viewers. I think this will be valued by the recipients of your work.'

In the slideshow below you can see a step-by-spep process of how Fiestoforo creates his cartoons. For an even more detailed explanation of his work process, check out 'How to make a political cartoon' on instructables.com. Fiestoforo also has two Youtube videos explaining how to add color and texture using GIMP.