Limits to What We Publish?

The question most frequently asked about Cartoon Movement is if there are any limits to what we will publish. Of course we have a quality standard; we only publish the work of professional cartoonists that have passed our board of review. But in terms of content of the cartoons, it has always been our goal to allow our cartoonists to submit anything they want to our newsroom. There is a difference between cartoons that we publish (which are featured on the homepage), and cartoons sent to the newsroom; the newsroom is an ongoing public editorial meeting, where the editors, cartoonists and audience debate cartoons, and decide on the ones fit for publication on the homepage.

Cartoonists are natural champions of freedom of expression, because editorial cartoons would not exist without this right. But there are two sides to cartoons. On the one side, cartoons provide powerful visual commentary, boiling down issues into a single panel, making you think, and generating debate. The other side, however, is darker. Because cartoons simplify issues, they use visual tools that allow them to be understood by a broad audience. These tools are the same that are employed in the making of propaganda. Stereotypes can enforce prejudice, caricatures can demean, belittle and degrade.

Shlomo Cohen on Islam in Europe. The cartoon is based on the tale of the frog and the scorpion. 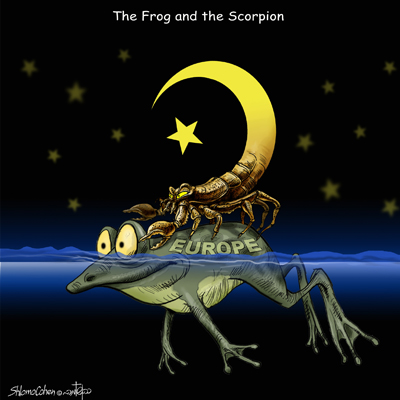 Some of the more controversial topics include the Palestinian-Israeli conflict, and religion, in particular Islam (or more in particular, how Islam is perceived in the West). Up until now, we have been fortunate that any controversy gave rise to a constructive and meaningful discussion, and not to threats of violence or worse. Most of our cartoonists (in fact, most cartoonists in general), tend to be liberal in their outlook, and more interested in understanding other perspectives than in being enraged.

But two cartoons (both shown below) that were uploaded recently to the website had us seriously debating if there are limits to what we allow in our newsroom. Recently joining our network, Russian cartoonist Igor Kolgarev is a Christian, whose views reflect the opinions of many Russians. The cartoons in question concern gay marriage and the law that was passed through Russian parliament recently, that forbids any 'propaganda' on homosexuality. 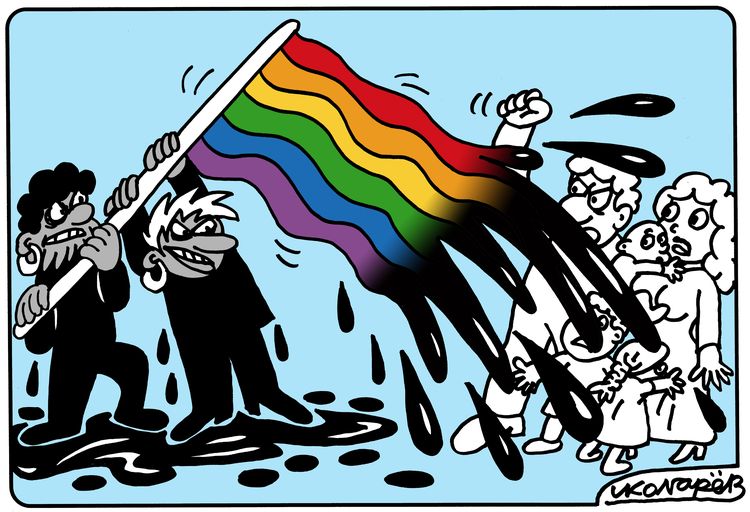 This post is meant to explain why we decided not to remove the images in question, and also to explain our editorial policy in general. There will no doubt be other images in the future that will spark controversy:

-Freedom of opinion is one of our (if not the) core value of Cartoon Movement, and any form of censorship on our part would seriously and irredeemably breach that value. We much rather discuss why something should be censored, than actually censoring it, thereby removing all possibility for discussion. We trust our community to weigh these images, and to discuss them. Censorship avoids controversy, but it also removes the possibility for people to change their opinions. In this case, that potentially could mean people seeing the images and involved in the discussion could be moved to agree with Igor's point of view, but, equally, the discussion could serve to change Igor's perspective on things.

-Our motto 'there is more than one truth' would be a rather empty tagline if it only applied to those perspectives that are not in any way controversial. It is important to note that perspectives must be based on facts. Because we consider ourselves if not exactly journalists, then at least part of the professional field of journalism, our code of conduct calls for comics and cartoons that are based on checked facts. This is a more complicated policy with cartoons than it is with (comics) reporting, because cartoons are opinions. In this case, we could ask Igor to prove that gay marriage will damage traditional marriage, but he would be equally justified in asking us to provide proof that it won't.

-These images serve a purpose. They fuel the discussion on what is legitimate social criticism, and where criticism veers into the realm of hatred. For instance, compare these two cartoons by Kolgarev (1,2). Both oppose gay marriage, but cartoon 1 merely visualizes the criticism that gay marriage would be a bomb under the institution of marriage. Cartoon 2 goes a lot further, depicting gay people as angry and mean, deliberately out to hurt ordinary families (in this case literally slinging mud or filth). With cartoons, how an issue is visualized is as important as what issue the cartoon deals with. To understand the tools a cartoonist can use, and how these can be used in good and a bad way (and what these good and bad ways are), you need discussion. And for this discussion, you need controversial cartoons.

Amr Okasha on the ousting of the Muslim Brotherhood in Egypt. 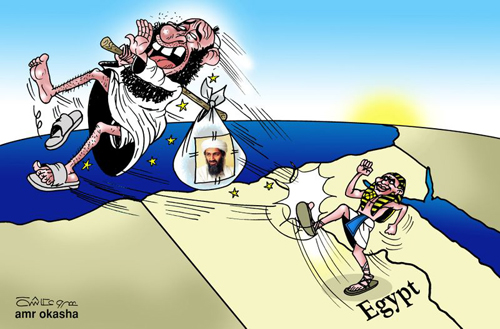 -Opposing perspectives can provide valuable self-reflection. As mentioned earlier, many of our cartoonists tend to be liberal. To convey their liberal opinions, they will sometimes rely on the same tools that are used in the images above to portray gay people as the bad guys. Examples of this can be found in the work of Egyptian cartoonist Amr Okasha. Amr works for the party newspaper of the liberal-democratic neo-Wafd party. In his cartoons, Amr is very critical of the Muslim Brotherhood, and he depicts members of the Brotherhood as dim-witted bearded zealots. This representation (which he uses to symbolize religious extremism in general) is not controversial, because the vast majority of the people on our website agree with Amr's perspective (outside of the website is another matter). In the case of Igor's cartoons, the majority of our audience vehemently disagrees. But if we examine both Amr's and Igor's cartoons, only looking at how they depict their subject (and not what they depict), is there really that much difference? Food for thought.

If you would like to share your thoughts on our editorial policy, feel free to comment here (comments are audited, but that is because so far, it's our only way to effectively fight spam on the blog), or shoot us an email. In everything we do, we aim for openness, inclusiveness and fairness, and we are definitely open to your input on how to make our policies more effective.

These same tired arguments have been made against equal marriage since the idea of equality became controversial. The counter arguments are irrefutable. At what point does imagery like this stop being the 'controversial but valid' opinion or an ignorant minority and start being laughable, bigoted, cultish propaganda?

It's an interesting issue on what you should publish and what you should not. It comes back to the identity of CM: are you a medium with an editorial policy (== philosophical and political worldview) or are you a neutral channel of others who hold and portray certain worldviews?

An interesting discussion, but hard to do without knowing the other side of the story. What this discussion could really use is a second blog post about those cartoons which were ultimately NOT published.

Our policy is to be neutral in terms of politics and worldview, and to be a channel where different perspectives on the world are collected and discussed. Our editorial policy is relevant because every day the editors decide which cartoon will run on the homepage; this is decided in part by the audience (voting for cartoons), but also by what's in the news, by which cartoons we think will sell well to clients etc. In publishing cartoons on the homepage, we do try to be as neutral as possible, so we don't just publish cartoons we agree with.

If there were any cartoons that were removed from the website, we would certainly have mentioned it in this post, but up until now, we have never seriously considered removing any cartoon. That's also why we wanted to write this post; to start a discussion about what our editorial policy should be in the case of controversy, and if there are in fact any limits to what should be allowed in our newsroom.

Would a racist cartoon attacking black people just because they are black, for instance, be published by this website? I think not (and hope not!) because I am sure there are some lines that should not be crossed.

However, when the subject is gay people it falls under the "freedom of opionion" category. Sorry, I am very disappointed with this, specially with all what is happening now in russia (the lower r is intentional by the way.)

Honest answer: we don't know if we would allow a blatantly racist cartoon to run or not. That's also why we started this discussion, to find out if these images crossed a line, and if not, what type of images would. We do know that we would always prefer discussion over censorship.

Probably needless to say that is no way that these types of images would ever make it to publication on our homepage. This discussion is only about whether or not they should be visible in our public newsroom.

FIRE THE BIGOT RUSSIAN - They are sick sadistic bigots.