'With All the Support I Can Raise My Voice'

Interview with Mohammad Saba'aneh about his experiences in prison

Palestinian cartoonist Mohammad Saba'aneh was released from prison on July 1st. He was arrested in February, and sentenced to five months in prison for 'contact with a hostile organization'. We asked him a few questions about his experiences over the past few months.

How were you treated while in prison?

'It was a very harsh situation, they treated me as other Palestinian prisoners.  A delegate from the Red Cross has visited me, and he would like me to talk to the people about the suffering of the prisoners inside isolation, because they never get to visit these prisoners to see the conditions of their imprisonment.'

A recent cartoon by Mohammad, made after his release from prison. 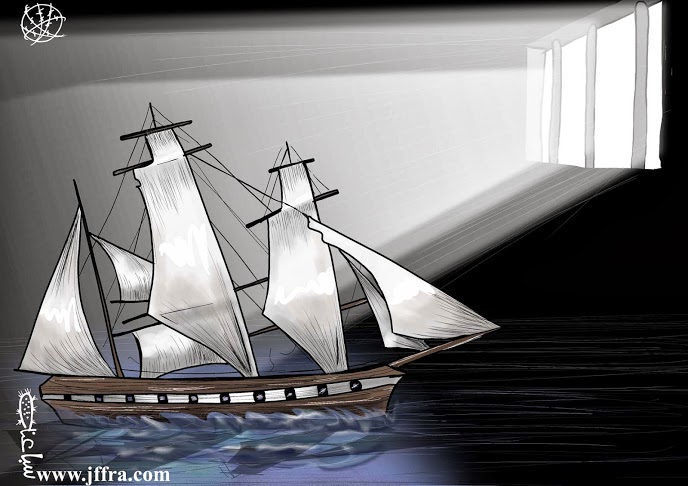 Do you think you were arrested and charged because you are a critical cartoonist?

'Allegations were raised against me by the Israeli court. They didn’t detain me for being a cartoonist but they did question me about a number of my works that were unacceptable to them. These works were related to the prisoners and settlements and other Palestinian issues.'

Were you aware of all the international protest against your arrest? How do you feel about it?

'I didn’t receive anything inside the prison, because there was no communication to the outside, but after being released I saw all the works that supported me. I am very proud of that and of the support campaign. This makes me sure that my message as a cartoonist is important, and with all this support I can succeed in raising my voice.'

You were able to send some cartoons from prison. How did you do this?