Malaysian cartoonist and CM member Zunar reports on the appeal on his arrest and detention in 2010:

Zunar vs the police and the Malaysian government (Unlawful Detention under The Sedition Act): An appeal at the Appellate Court on the 18th June 2013

The Appellate Court has set 18th of June to hear my appeal on the decision of the Kuala Lumpur High Court's ruling regarding detention of me under the Sedition Act three years ago.

In his ruling on July last year, the Kuala Lumpur High Court Judge Justice Vazeer Alam Mydin Meera rules that the detention was lawful, even though in the other part of the judgment the court had instructed the police to return all my books and drawing and pay the damages.

Cartoon by Zunar on press freedom in Malaysia 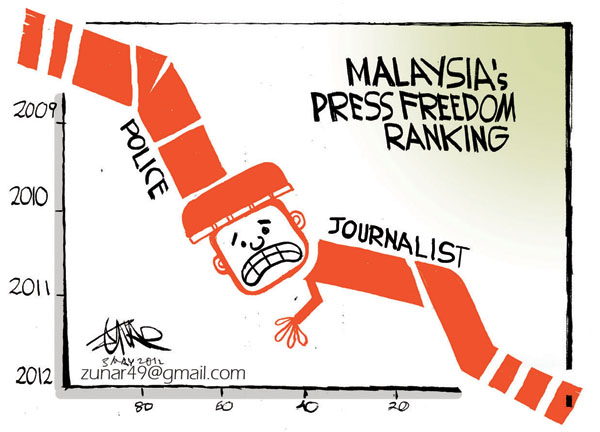 On the 24th September 2010, I was arrested and jailed for two days over the publishing of my then new comic book, Cartoon-O-Phobia. I was investigated under the Sedition Act, which carries the maximum of three-year jail if found guilty.

The detention was made several hours prior to the launching of the comic book.

I then filed a suit to challenge the Malaysian government on the grounds that the arrest was made in bad faith, mala fide, and not according to the law. This is based on the fact that when the arrest was made, the books were not available in the market yet. In my suit, I claimed general, aggravated and exemplary damages, losses from an art collage and the 66 books confiscated during the raid, and loss of earnings from the inability to sell books.

We will follow the case, and report on the outcome of the appeal next week.