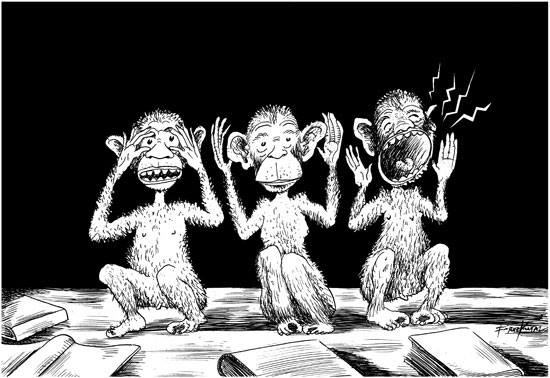 Cartoon about the protests in Turkey

Firuz Kutal is a cartoonist of Turkish origin. In 1985 he moved to Norway, where he studied at the Oslo National College of Applied Arts. Firuz Kutal collaborated as political cartoonist with various newspapers and magazines in Norway, Turkey, Greece, Spain and England. He creates comic-strips and animations as well as cartoons and illustrations. In 2009 he received a Citation for Excellence in the United Nations Political Cartoon Award. He is member of Cartooning for Peace and FECO Norway.

Cartoon Movement is partnering with Butch & Sundance Media, a Dutch collective of media pioneers and social entrepreneurs (as they describe themselves) to tell inspiring stories of women in conflict zones. These women are fighting for their rights and risk their lives to save others; their struggle contributes to peace in their country, town or village.

As with every project we do, it's not just about the story, it's also about how the story is told. Female Superheroes (FSH) is an interactive project: the stories are presented by an innovative combination of comics, video, audio and interactive 360 degree photography.

The project is aimed at teenagers. By navigating through the content, you will be challenged to find out your own potential as a superhero. Here is how it will work:

It starts with a video to introduce the female hero, the video ends up in a 360 degree panoramic picture. In this panorama you can look and click around to other panorama's, video's, audio en detail pictures. Every panorama has a central question. After a certain period of time, you have to choose between a couple of options what you think the main character would do. So the challenge is to really understand the main character in her own context.

The right answer is not what you should do, but what you think the woman will do. You will find the answer in the comics that will follow your choice. After a series of drawings, you find yourself in another panorama, solving the next dilemma. At the end of the episode you'll see your overall score and see how much you are similar to the Superhero. As a reward you'll get a thumbnail to post on your Facebook timeline. 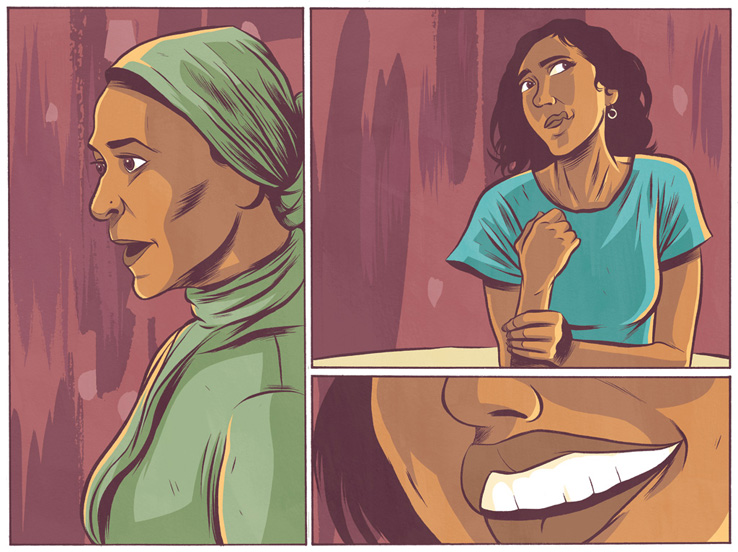 The first three episodes will tell the stories of women in Egypt, Burma and Sudan. All stories are based on interviews, pictures, video and audio made by Butch & Sundance Media. For the part of the stories that will be told with comics, we have asked UK artist Tom Humberstone, who already produced two (1,2) excellent pieces of comics journalism for Cartoon Movement, to work with us. This post is illustrated with two pages of comic telling the story from Egypt. Although the text has yet to be added, it does give a feel of how the project will look.

The project will launch at the end of summer. 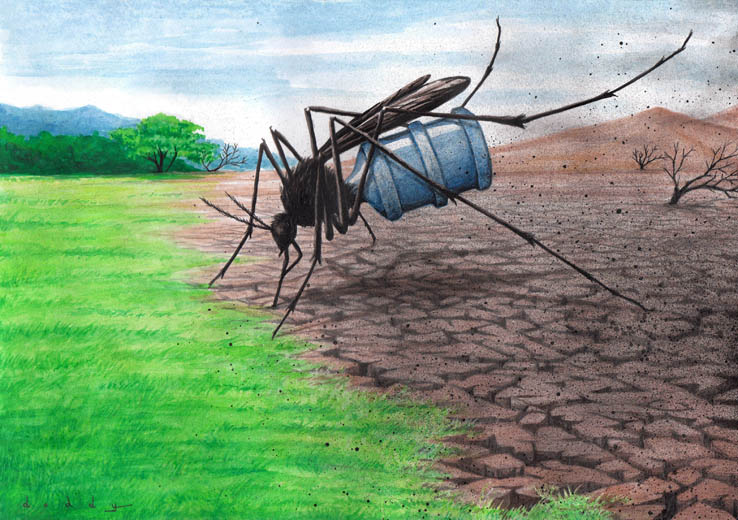 Slowly but surely we're closing in on our goal of having at least one cartoonist in every country on earth. The first one from Indonesia joins us this week. Doddy Iswahyudi is a freelance cartoonist whose work has appeared in the Jakarta Post and various other national and international publications. His style of working, doing both the drawing and coloring by hand, is becoming rare in this age of graphic software. Check out his blog here. 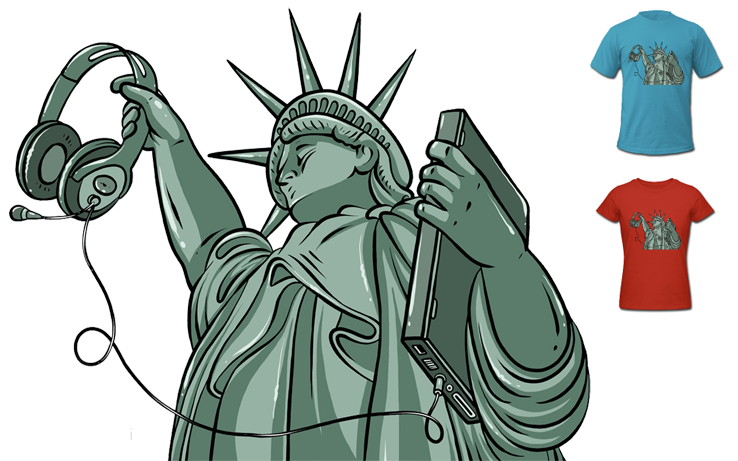 We have added a new design to our t-shirt webshop. Prism allows the US to track people on the Internet worldwide, seriously breaching right to privacy, but the programme is still defended as necessary in the face of terrorism. Cartoon by Jehad Awrtani from Jordan. 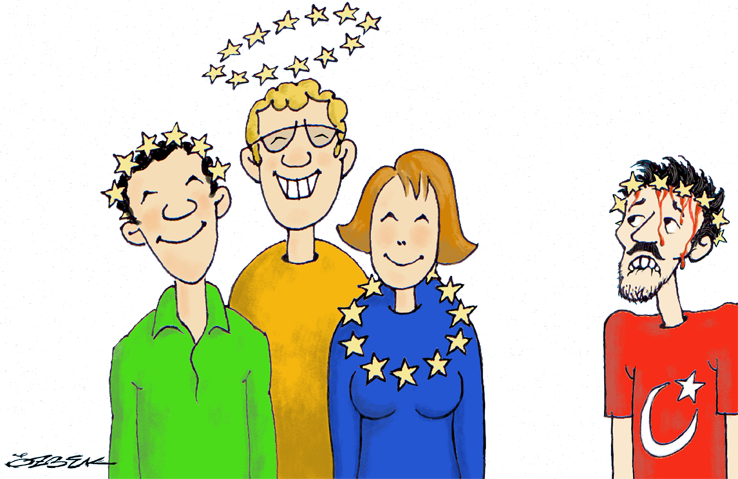 Turkey, part of the European family? - Cartoon by Eray Özbek

We have created a new collection of cartoons, about Turkey. In many ways Turkey occupies two different worlds. The country bridges the divide between East and West, not only by its location in both Europe and Asia, but also when it comes to politics, religion and culture. The legacy of Atatürk has made Turkey into what is probably the most secular state in the world, but as a liberal democracy, the Turkish political system is still deeply flawed. The dominating role of the army and the denial of the Armenian genocide have not helped Turkey's application to become a member of the European Union, and signs of growing influence of Islam under the reign of Ergdogan have many Europeans, politicians and citizens alike, doubt if Turkey belongs with Europe. Recent protests have shown that there is division within as well. Cartoons we have published over the years, bundled in this collection, illustrate Turkey's ambivalence. Even more cartoons on Turkey can be found in our newsroom.

Malaysian cartoonist and CM member Zunar reports on the appeal on his arrest and detention in 2010:

Zunar vs the police and the Malaysian government (Unlawful Detention under The Sedition Act): An appeal at the Appellate Court on the 18th June 2013

The Appellate Court has set 18th of June to hear my appeal on the decision of the Kuala Lumpur High Court's ruling regarding detention of me under the Sedition Act three years ago.

In his ruling on July last year, the Kuala Lumpur High Court Judge Justice Vazeer Alam Mydin Meera rules that the detention was lawful, even though in the other part of the judgment the court had instructed the police to return all my books and drawing and pay the damages.

Cartoon by Zunar on press freedom in Malaysia

On the 24th September 2010, I was arrested and jailed for two days over the publishing of my then new comic book, Cartoon-O-Phobia. I was investigated under the Sedition Act, which carries the maximum of three-year jail if found guilty.

The detention was made several hours prior to the launching of the comic book.

I then filed a suit to challenge the Malaysian government on the grounds that the arrest was made in bad faith, mala fide, and not according to the law. This is based on the fact that when the arrest was made, the books were not available in the market yet. In my suit, I claimed general, aggravated and exemplary damages, losses from an art collage and the 66 books confiscated during the raid, and loss of earnings from the inability to sell books.

We will follow the case, and report on the outcome of the appeal next week. 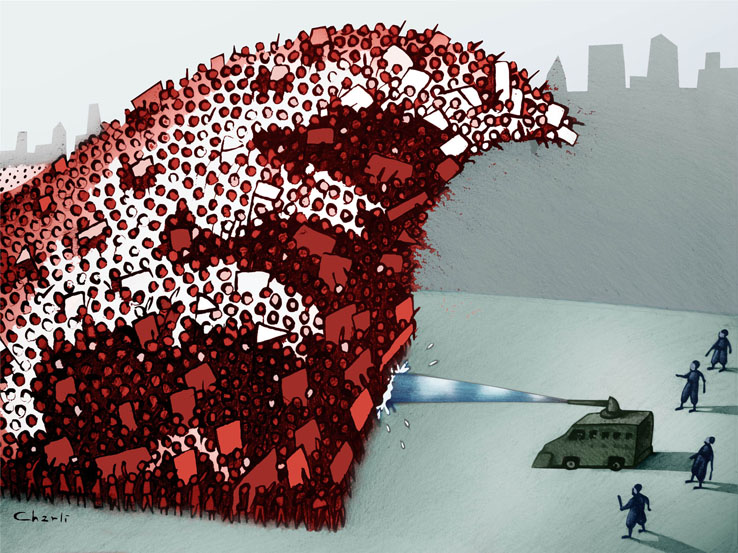 We're delighted to welcome another excellent artist from Cuba to our community! Carlos David Fuentes is a contributor to the humor section of Juventud Rebelde and the monthly La Calle del Medio, both Cuban publications. 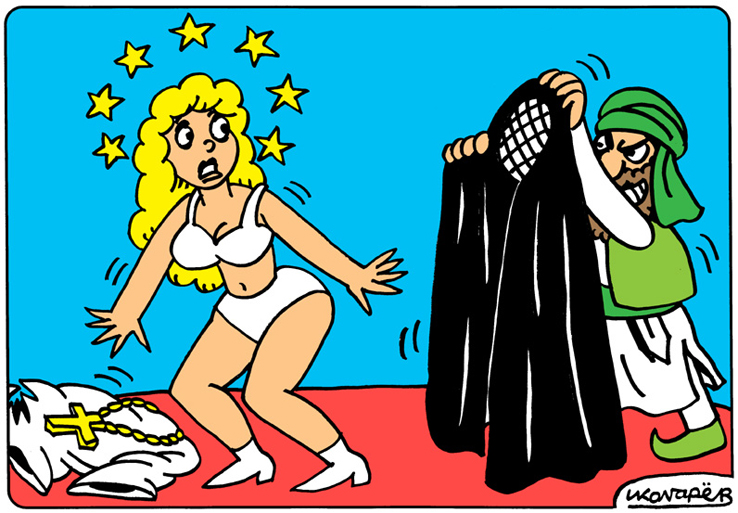 Igor Kolgarev is a cartoonist from Moscow. His first cartoon was published in 1983, and since then, he has been a regular contributor to various Russian newspapers and magazines.

We have added a new design to our t-shirt webshop, available for €15.90/$16.40. The Turkish government is coming down hard on the protesters, but according to Spanish cartoonist Elchicotriste, they're forgetting one thing: 'Oppression feeds the will of freedom.' Cartoon by Elchicotriste from Spain. 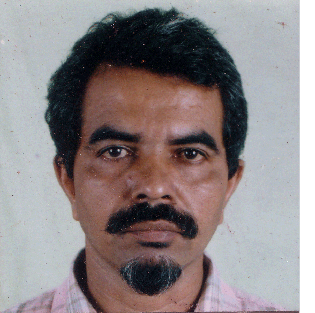 Prageeth Eknaligoda is a journalist and cartoonist from Sri Lanka, who has been missing since 2010, and is believed to have been murdered by the government. Cartoonists Rights Network International has been on the case from the beginning:

On the evening of January 24, 2010, at about 8:30 P.M, Prageeth Eknaligoda, an investigative reporter, columnist and occasional cartoonist for the newspaperLanka E-news, left work in Rajagiriya, a suburb of Colombo. He never made it home to his wife and two sons.

Prageeth was an outspoken critic of the current regime. At the end of 2009, Prageeth wrote some scathing columns about President Rajapaksa and various members of Parliament. A year earlier Prageeth had been warned by police during an overnight arrest that unfortunate things could happen to him if he continued investigating the government.

Read the entire case history on the website of CRNI (scroll down until your reach Prageeth's case).

Prageeth's wife Sandya has fought an unrelenting battle to learn the fate of her husband: 'Her bravery and heartbreaking story have galvanized the human rights and free speech community in Sri Lanka. Her quest to force the Sri Lankan government to account for the whereabouts and the fate of her husband has also become a popular rallying point for those in opposition to the Rajapaksa government (CRNI).'

Recently, the story has taken a new and rather bizarre twist. On June 5, Arundhika Fernando, an MP for the ruling party, told parliament that Prageeth Eknaligoda was residing in France: 'Journalists who you will claim to have disappeared are living France. I too met several of them. A famous journalist whom you will always talk about is residing in France.'

Instead, the revelation by Mr. Fernando has inspired no discernible action whatsoever. According to Keheliya Rambukwella, the Minister for Media and Information and media, the allegations cannot be investigated by the intelligence agencies, because of the parliamentary privileges enjoyed by Mr. Fernando. Although Mr. Fernando has stated he is now prepared to testify, his story has been denounced by the one witness that could have back up his claim, and other evidence (e.g. a photograph) is lacking. By way of the media, Sandya Eknaligoda has called the government's bluff: 'I request the government to bring my husband to Sri Lanka through the Embassy of France.'

The unsubstantiated claims seem to point to an effort of the ruling party to disavow the truth behind the disappearances, and thus the need to investigate them. In spite of the claimed effort to thoroughly investigate the thousands of disappearances in Sri Lanka, the developments suggest a cover-up. To make the story even more preposterous, this is the second time government officials claim Prageeth is alive and well. In 2011, Attorney General Mohan Peiris testified before the UN Committee Against Torture that Eknaligoda took refuge in a foreign country and that the campaign to solve his disappearance is a hoax. But he failed to provide any evidence to substantiate his claim.

According to the Committee to Protect Journalists (CJP), the claims are part of a tactic of the Sri Lankan government to pave the way for a new repressive media law that seeks to re-criminalize defamation and a code of ethics that threatens to give the government a legal basis to quash journalism it deems 'unethical'.

Although the story has characteristics of a slapstick comedy, the reality is profoundly sad, with a grim outlook, not only for  the fate of Prageeth Eknaligoda, but for freedom in Sri Lanka as well.