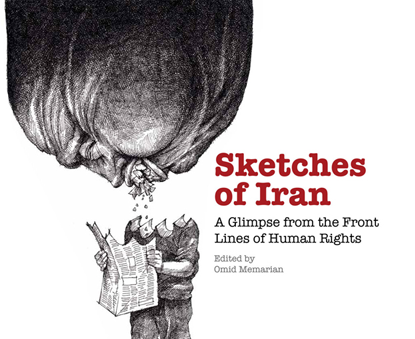 'If a picture is worth a thousand words, then how much would a picture AND a thousand words be worth?' This thought, or something along these lines, must have been the starting point of Sketches of Iran: A Glimpse from the Front Lines of Human Rights, published by The International Campaign for Human Rights in Iran.

The book is a compilation of cartoons by seven Iranian artists, coupled to columns and commentary by Iranian writers, activists and family of activists in prison or dead. The book is partly funded by a Kickstarter campaign, which was used to print the first 1000 copies of the book, but also to ensure that the book ended up in the hands 'of policymakers, human rights advocates, UN officials, and others who can make a difference in the human rights situation in Iran and in the lives of these contributors and others like them.' 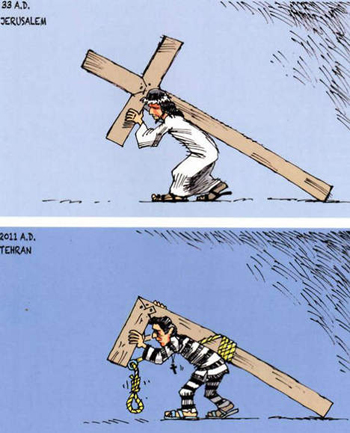 I have never seen cartoons and text used in quite this way. Instead of one providing support and context to the other, the images and stories enhance each other simultaneously, being dominant and supportive at the same time. The equal weight that is given to both is reflected in the composition of the book, where one page is given to commentary and the full page opposite is reserved for the cartoon. Printed in full-color, the cartoons are all without words, and demonstrate the skill and power of cartoonists from Iran.

To me, the most powerful pages are those where the visuals are tied to the testimonies of the family members whose sons, daughters, wives or husbands that have fell in the grasp of the regime, sentenced to years in jail, or killed by police, military or other government thugs. These heart-wrenching stories bring the reality of activism for human rights very close to home. What do you tell a 3 year old boy whose mother has just been sentenced to 8 years in jail? And what justice is there for father whose son was murdered by the regime?

In these testimonies the words seem to bounce off the image, reverberating with it, resulting in a resounding impact to the reader. Most of the images are powerful, and often a frontal assault on the regime in Iran. They not only show that art and creativity thrive even in the face of oppression, but also that visuals are a strong means of protest.

There are some drawbacks to the book. Some of the commentaries by activists are not particularly well-written, and an inconsistency in style and lay-out of texts makes for a slightly sloppy look sometimes. And there might have been a few more 'real' editorial cartoons instead of portraits. But these minor flaws do not lessen the impact of the book. Not many books can say claim to reinvent the role of editorial cartoons, but Sketches of Iran aims to do exactly that.

Setting the images on equal footing with text is a new concept, and a good one. Browsing through sketches of Iran, we are forced to re-examine our concept of visuals and text, and how they interact. They also succeed in accomplishing the main mission: to present an overview of human rights violations in Iran and to raise awareness. This is not a book to read in one go; instead, it is a book to pick up once in a while to read one or two commentaries and look at some the images. This way of reading actually help the stories and the images to stick.

To maximise the reach of the book, it's available in a bilingual English-Persian edition.

Featured cartoon by Nikahang Kowsar, on the prosecution of Christians in Iran.