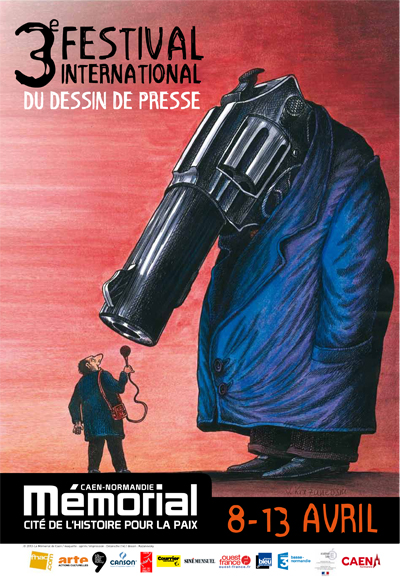 Next week, Cartoon Movement will be present in Caen at the 3e Festival International du Dessin de Presse. Some of the world's best cartoonists will be present, and we hope to interview some of them for the blog.

This is the third edition of the festival, and the most comprehensive to date. Starting out in 2011 as a two-day event hat was created by the Caen Memorial and Cartooning for Peace, the festival has developed into a week long dialogue between cartoonists, journalists, students and the general public. Issues that will be debated are the future of editorial cartoons, the role of cartoons in revolutions, censorship and taboos.

A special item on the program is a showing of the documentary project Fini de Rire (No More Laughing) by Olivier Malvoisin. Some months back, we reported on this project, and commented that it was a great project, but a shame that it was only available in French and German, and that some of the features didn't seem to work. Last week we learned that we had stumbled upon a beta version, which explains why it was incomplete.

No More Laughing is a transmedia project, consisting of a documentary and a webdoc:

No More Laughing intends to revisit a number of major and minor events that occurred during the first years of the millennium. The lines are redrawn through cartoonists and their cartoons. As the story progresses in Israel, in Palestine, in Germany, in Tunisia, in France, in Belgium and in the United States, the film plots the various twists and turns of contemporary taboos and asks the following question: where does freedom of expression stand today?

No More Laughing, the webdoc is drawing new boundaries for freedom of expression thanks to relevant and powerful testimonies from cartoonists from all four corners of the globe, thus inviting Internet users to join in and assist with its experiment. Together with the various press cartoonists, the webdoc creates a global map of taboos and barriers to the freedom of expression.

We intend to talk to the director Olivier Malvoisin about this project, the reasons for making a (web)documentary and what he hopes to achieve.

So stay tuned next week for more cartooning news, updates and interviews from France!

Last month, we reviewed 'Political Cartoons and the Israeli-Palestinian Conflict' by Ilan Danjoux. Our media partner Radio Netherlands Worldwide has published an interview (in Arabic) with Mr. Danjoux, which we republish here in English. Interview by Jannie Schipper.

Can cartoons predict violence? And can you change your enemy’s mind with cartoons? Canadian researcher Ilan Danjoux tries to answer these and other questions by studying cartoons from Arab and other countries.

Negotiating with the devil

“Why should you be upset about a cartoon? It depends if you think cartoons predict something or not,” says Danjoux. “If they don’t, you can ignore them; if they do, you’re silly to ignore them.” According to Danjoux, cartoons can be seen in three different ways: predictors, opinion-changers or chronicles. During the Arab revolutions, Ilan Danjoux observed a dramatic difference in the way Libyan president Gaddafi was portrayed and the way Mubarak was portrayed. “Mubarak was seen as an official, he was not demonized as much as Gaddafi, who became the devil incarnate.” According to the researcher, those cartoons might have predicted the two dictators’ respective fates. “The more demonized the depiction of the person, the narrower the policy options become. You can no longer negotiate with people that are depicted as animalistic or barbaric. Mubarak and Gaddafi both had revolutions ousting them – but one was killed, the other went on trial.”

Don’t drop cartoons on your enemy

The idea of the chronicle is the oldest and most common. “It is being used by historians all the time: if you want to know what a society is, look at the cartoons.” One recent observation: in after-revolutionary Egyptian cartoons, president Morsi is hardly ever depicted in person. “They are more focused on Islamists generally, while during the revolution, cartoons were very focused on Mubarak. It becomes an ideological struggle for the soul of the revolution, rather than against one person trying to retain power.” Another observation: many recent cartoons focus on censorship. “That does not necessarily mean that the censorship is bad – if the censorship is effective, you usually cannot discuss it. It means people fear that censorship will return.” Cartoons cannot change opinions, says Danjoux. “It has been tried: dropping cartoons on enemy populations to try to change them. The allies did it in World War II, and in the 2006 war, the Israelis dropped cartoons on Lebanon to try to say that Hezbollah is a snake. But it didn’t work.” Why not? “Cartoons hardly provide arguments, they just reproduce them,” says Danjoux. “They confirm what people already believe. Cartoons will always have an adversary: ourselves polluting the world, or the corrupt official, or the school director.” That is one reason why people love cartoons, says Danjoux. “They simplify the world for us. For example, I can’t figure out why the euro is crashing. ‘It’s the bankers’ fault.’ Great, I understand it, down with the bankers.” 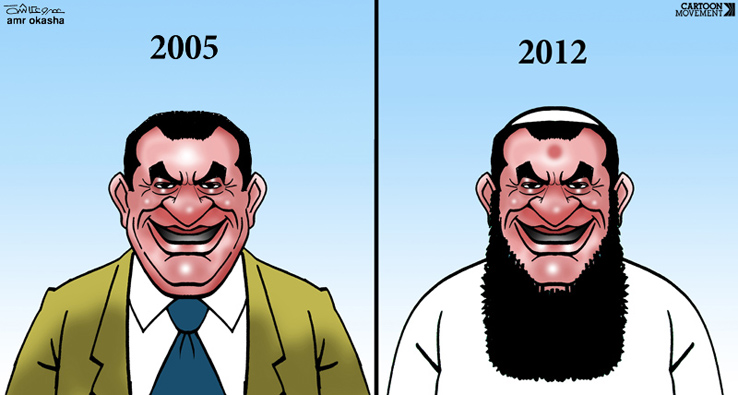 Shift in focus: from the specific threat of Mubarak to the general threat of Islamists - Cartoon by Amr Okasha

According to Danjoux, people need ‘cartoon literacy’: to learn how to read cartoons correctly. “What a lot of people do is take American and Arabic cartoons from the Arab Spring and conflate them. But you cannot just put things from different nations together.” Nor even cartoons from one single society. “If I am trying to figure out what the Coptic community in Egypt thinks of, I’ll have to look at their newspapers. Conflating them with other Egyptian newspapers will mask possible tensions.” His most recent study is about cartoons in Israeli and Palestinian newspapers. “There is a difference between how Hamas newspapers will depict things, or how Al-Quds will. It is also interesting to see that most Israeli cartoonists depict their own leadership as their greatest enemy.” “To understand the meaning of a cartoon, you need to understand who the cartoonist is and where he is publishing. Is it a mainstream publication, is it a state-funded or commercial newspaper? There were cartoons published in Russia prior to the end of the Cold War. Russia was under censorship, and the way America was depicted was softening. If you know this is an official newspaper, you can understand there is a softening of the official line. If the cartoon is published in a commercial newspaper, you’re looking at the sentiment of the population rather than to the official view.”

The same image can mean something else in different contexts. “For example, Jesus of Nazareth is used in Palestinian cartoons quite often,” says Danjoux. “Jesus on the cross throwing stones at Israelis. From an outsider’s point of view you might look this as religious warfare, but he was also born in Bethlehem, so if you’re Palestinian, you’ll say he’s a Palestinian. Seeing Jesus in the picture, people in the West will view it as a religious conflict as opposed to a national conflict, while the original Palestinian reading was quite different.” Color is another example. “As a Canadian, if I draw someone with a green t-shirt, it means they’re environmentalist. If I move that into the Middle East they become Islamists. The meaning of green changes dramatically if you cross the border. So you need to know where the cartoon is published to understand it.” So do cartoons predict violence or not? Yes, they do, according to Danjoux’ research. But not with a guaranteed outcome. “Cartoons act in much the same way as seismographs act as a predictor,” explains Danjoux. “They show there is tension brewing. And if something happens, you know where the fault lines are. Like an earthquake: you know where the fault lines will be and you also know certain places where the earthquake won’t happen.”