Thursday April 4, Palestinian cartoonist Mohammad Saba'aneh was sentenced by a military court in Salem to five months in prison and a fine of 10,000 shekels for 'contact with a hostile organization'. The news is confirmed by Mohammad's brother Adel and his lawyer Riadh Arda.

Saba'aneh was arrested on 16 February 2013 when he returned from a trip to Jordan and was since then held without charge. He received only sporadic access to his lawyers. Various international press freedom organizations, such as Reporters sans Frontieres (RSF), Committee for the Protection of Journalists (CPJ) and Cartoon Rights Network International (CRNI), have called for the release of Mohammed. 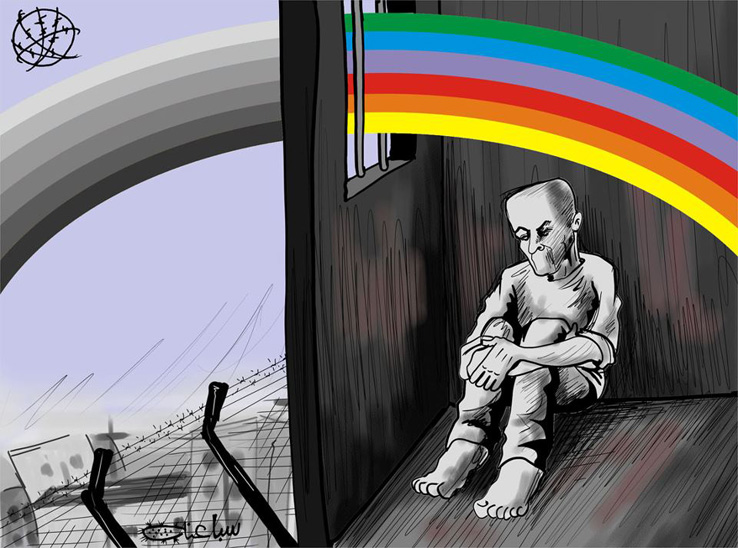 According to Saba'aneh's lawyer Riyadh Arda, Mohammad was accused of contact with and assistance to a hostile organization and transporting money for a hostile organization. Adel Saba'aneh tells RNW: "The only thing Mohammad did was contact a publisher in Amman who publishes a book about Palestinian prisoners." This book was compiled by their other brother, Thamer Saba'aneh. Thamer has been a member of Hamas and was arrested weeks after Mohammad. He is still being held.

Tired of transport and food

Initially, Mohammad denied all accusations. The only reason that Mohammad has accepted the conviction is, according to Adel Saba'aneh, because he could no longer bear the conditions in the prison where he was held. "He's sick, he was transported to a different place every few days and a pre-existing intestinal condition was aggravated because of the prison food.”Adel Saba'aneh thinks that the cartoons of his brother and his international reputation have played a role in sentencing. "In similar cases, the lawyers say people are often released, but the authorities were determined to convict Mohammad. The longer he would refuse to confess, the higher the sentence would be. They would not let him go."