Liza Donnelly is a cartoonist for The New Yorker; her cartoons also appear on Forbes.com and Women's eNews.org. We meet in Caen at the 3rd International Cartoonists Festival, where we talk about women and cartoons. 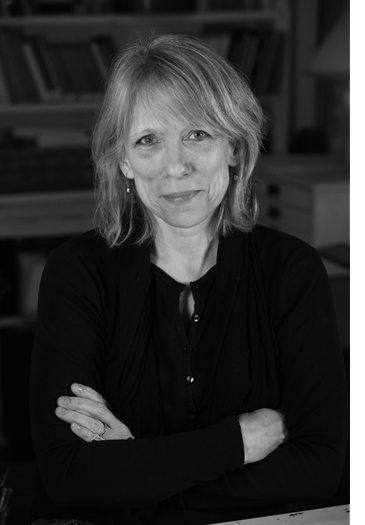 Why do you think there are so few women cartoonists?

I wrote a book titled Funny Ladies, which is about the history of cartoonists who are women in the New Yorker magazine. It spans from 1925 to the present, and there actually were women cartoonists in the first issue in 1925. So I've done a lot of research on that topic, and I have been involved with women cartoonists around the world as well. Reading about why there aren't more women cartoonists, and also reading about humor and gender, I can say that it's a complicated question. There isn't one answer.

First of all, there have been very few role models for women to want to become a cartoonist. Secondly, women are often raised in a culture, American culture as well as other cultures, to not be funny. To be funny, to be the jokester or humorist, has traditionally been a man's job. Also, women are raised in many cultures to be the peacemaker, to make everybody happy. And humor is often ridicule, poking fun at other people, even if it is a friendly and loving kind of poking. This is not something women have been raised to do.

Another reason is that, historically, editors have been men. It's not that they say 'I do not want a woman cartoonist', but they may not understand her perspective as well as they would understand the perspective from a man. And they may not see it as important.

I have heard you say that in the past, there were women cartoonists, like in the first issue of the New Yorker in 1925, but also before that, when women fought for the right to vote. Do you think there is a lack of causes for women in the US to rally around?

There's plenty of reasons for women in the US to draw cartoons with all the attacks, particularly local, on women's rights. But of course women draw cartoons about everything, are interested in all political issues; I and other women don’t draw cartoons just about women’s issues. The women who created cartoons for US Suffrage in the 1910’s did have a cause, and after the vote was won, many of those women stopped drawing political cartoons, oddly. I am passionate about global women’s rights, so I focus a certain percentage of what I draw on that. 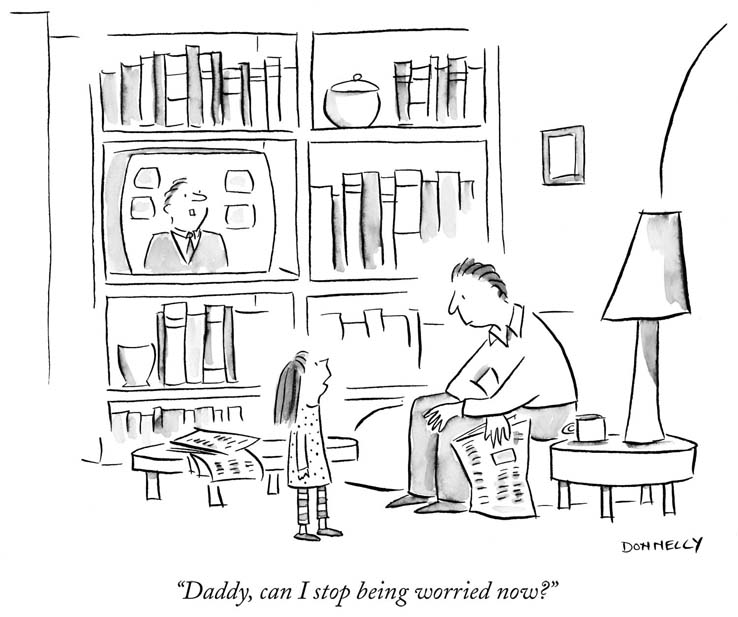 Cartoon by Liza Donnelly for The New Yorker, published a few months after September 11th, 2001.

Is there  a difference in motivation between men and women when it comes to making cartoons?

I've taught cartooning to students aged anywhere between 6 to 15, and you can see little girls more often draw to please others, to make others happy. Boys draw for their own interest, or to show their male friends how funny they can be. I'm generalizing, but there is an interesting divide. This may be, and probably is, cultural conditioning.

Humor is, or can be, an aggressive and dominating activity, particularly something like stand-up comedy. And I think you can sort of talk about cartoons in the same breath. A comic is standing on the stage, and he's got control of the audience. Women have not been raised to be like that, to exert that kind of control.

Why do you think it's important that we get more women to become political cartoonists?

Don't you think we should have cartoons from everybody, both genders and all races? That would only increase the perspective of what's going on in the world. The other thing I'd like to talk about is something that I also cover in my TED talk Drawing on humor for change. Although women don't necessarily draw differently than men, there perhaps may be a perspective from women that might differ from the perspective from men. And if it is a different perspective, then we need to hear about it. In most cultures, women are the care-givers, the ones that raise the children and pass on tradition. It is their job to know the rules of the culture they live in, and they know more intimately what's going on in that culture.

"Once you open up the standards for what is a good cartoon, you're going to get different people. Not just white men."

So this points to possibly two different kinds of cartooning. There is the political cartooning that's about major events, about world leaders, governments and laws, about conflict and war. About “big” issues. Some cartoonists can possibly contribute a different kind of cartoon, bringing attention to what's going on the ground. What's happening with individuals in a society—traditions, families and relations between men and women. It's often important to know these details in order to help make things better.

That ties in with the next question: why do you think political cartoons are important?

I think cartoons increase the dialogue about what's going on in the world. And particularly international cartoons, that often don't have words, can talk to other cultures and show what is happening. Take Africa, for instance; I am not as familiar with events in Africa as I should be. But if I see a cartoon by a Nigerian cartoonist, I know that it's only one perspective, but it does give me an idea about what going on and I can go read more about it. So cartoons increase communication, and show us our humanity. We all share the same worries, desires and hopes. 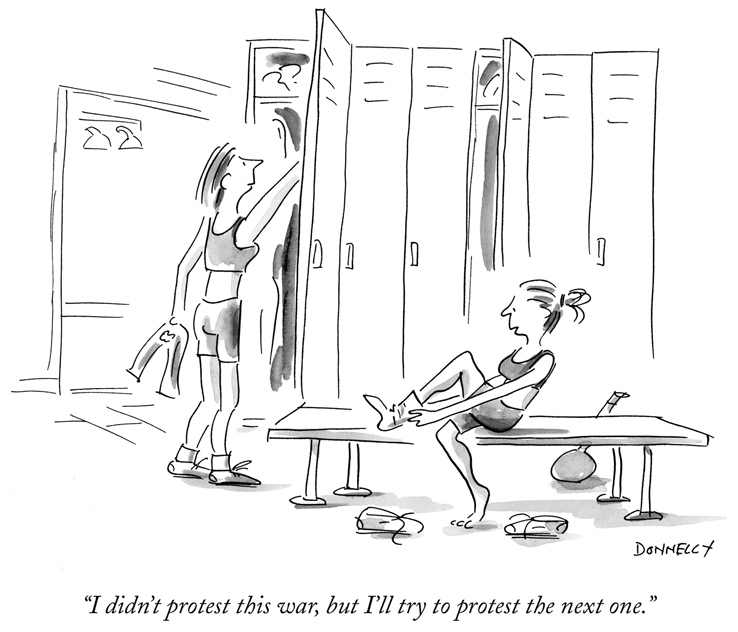 Cartoon by Liza Donnelly for The New Yorker.

Over the last two decades, have you seen an increase in women cartoonists?

I think there is an increase, but it might be more global than in the United States. Although in the US I think there are more women involved in doing webcomics. But that's not surprising because there aren't many outlets for cartoonists. Newspapers are dying, and the New Yorker is one of the last places where you can do the type of cartoons I do.

When I got into the New Yorker in 1979, my editor at the time was Lee Lorenz, and I interviewed him for my book Funny Ladies. He actually brought in a number of women cartoonists, myself, Nurit Karlin, who is an Israeli woman, Roz Chast and Victoria Roberts. In the interview, I asked him why. He said he was not looking for women cartoonists, he was looking for different ways to express humor. The editor before him had a more narrow concept of what a cartoon should be.

A New Yorker cartoon doesn't have to be a picture with a caption; it could be an ephemeral, weird and wacky kind of humor, like the work of Roz Chast, quietly political like the work of Nurit Karlin, or slice-of-life type cartoons by Victoria Roberts, where the humor is not all that obvious.

Once you open up the standards for what is a good cartoon, you're going to get different people. Not just white men. But still, in 2013, the New Yorker only has around eight women cartoonists, out of a pool of about 50 regular contributor cartoonists.