Upcoming Review: The Art of Controversy 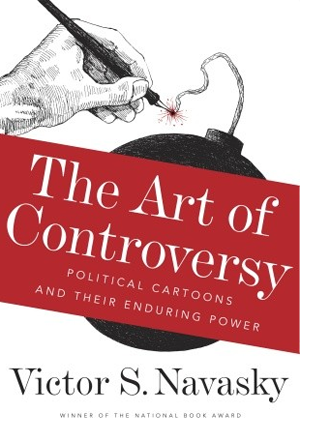 Going on sale in April, The Art of Controversy by Victor S. Navasky is (according to the publisher) a 'lavishly illustrated, witty, and original look at the awesome power of the political cartoon throughout history to enrage, provoke, and amuse.' The following description is taken from the website of the publisher:

As a former editor of The New York Times Magazine and the longtime editor of The Nation, Victor S. Navasky knows just how transformative—and incendiary—cartoons can be. Here Navasky guides readers through some of the greatest cartoons ever created, including those by George Grosz, David Levine, Herblock, Honoré Daumier, and Ralph Steadman.  He recounts how cartoonists and caricaturists have been censored, threatened, incarcerated, and even murdered for their art, and asks what makes this art form, too often dismissed as trivial, so uniquely poised to affect our minds and our hearts.

Drawing on his own encounters with would-be censors, interviews with cartoonists, and historical archives from cartoon museums across the globe, Navasky examines the political cartoon as both art and polemic over the centuries. We see afresh images most celebrated for their artistic merit (Picasso's Guernica,Goya's "Duendecitos"), images that provoked outrage (the 2008 Barry Blitt New Yorker cover, which depicted the Obamas as a Muslim and a Black Power militant fist-bumping in the Oval Office), and those that have dictated public discourse (Herblock’s defining portraits of McCarthyism, the Nazi periodical Der Stürmer’s anti-Semitic caricatures). Navasky ties together these and other superlative genre examples to reveal how political cartoons have been not only capturing the zeitgeist throughout history but shaping it as well—and how the most powerful cartoons retain the ability to shock, gall, and inspire long after their creation.

A review of this title is coming soon on the Cartoon Movement blog.