The Power of Cartoons 4 - Kianoush from Iran

This series was produced in a partnership with Dutch magazine Nieuwe Liefde. Eight of our cartoonists talk about cartoons that were controversial or that got them in trouble. The interviews run in the March issue of Nieuwe Liefde magazine, and will be published in English here on the blog. The interviews were conducted by Julia Ploum. Today's cartoonist: Kianoush Ramezani from Iran 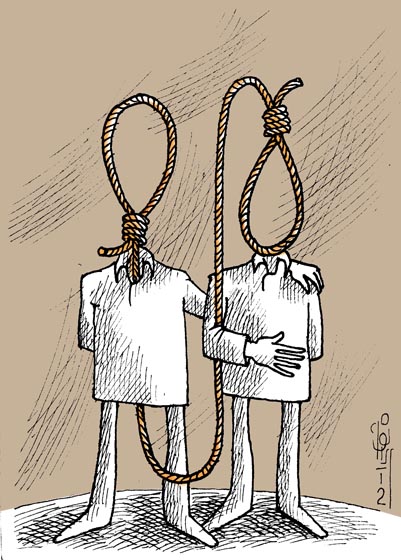 Kianoush Ramezani is an Iranian cartoonist and human rights activist who lives abroad as a political refugee since 2009 (currently as artist in residence in Geneva).

What inspired you to make this cartoon and what were the consequences?

‘In Iran homosexuality is a taboo in the society and a crime by Islamic law and of course in the Islamic republic of Iran. The penalty for this “crime” is the death penalty. I’m an activist against the death penalty and I’m working with the international organization ECPM (Ensemble Contre la Peine de Mort) since 2010. The consequence being that many of my Iranian Facebook-friends had to leave the country. It became potentially dangerous to be my (online) friend.’

In which ways is freedom of press restricted in your country?

‘Firstly, freedom of press comes from press that is independent, but there is no such press in Iran. All of them directly or indirectly are under the control of authority and the government who determine the red-lines of the media. Because all kinds of organizations and the court monitor and investigate journalist activities, journalists who want to survive, are obliged to censor themselves.’

How, in your opinion, can cartoons contribute to greater freedom?

‘I always mention and now repeat: In the countries like mine, suffering from a crisis of freedom of expression and press, the only and strongest alternative is the free internet. Internet is my main medium to publish my cartoons, because it is available for my fans inside Iran. Because my blog is blocked in Iran, I send my cartoons to online media and paper magazine through the internet. The more freedom and availability that internet can bring to Iran, the more cartoons will be strong and effective.’