The Power of Cartoons 1 - Crazy Crab from China

This series was produced in a partnership with Dutch magazine Nieuwe Liefde. Eight of our cartoonists talk about cartoons that were controversial or that got them in trouble. The interviews run in the March issue of Nieuwe Liefde magazine, and will be published in English here on the blog. The interviews were conducted by Julia Ploum. Today's cartoonist: Crazy Crab from China 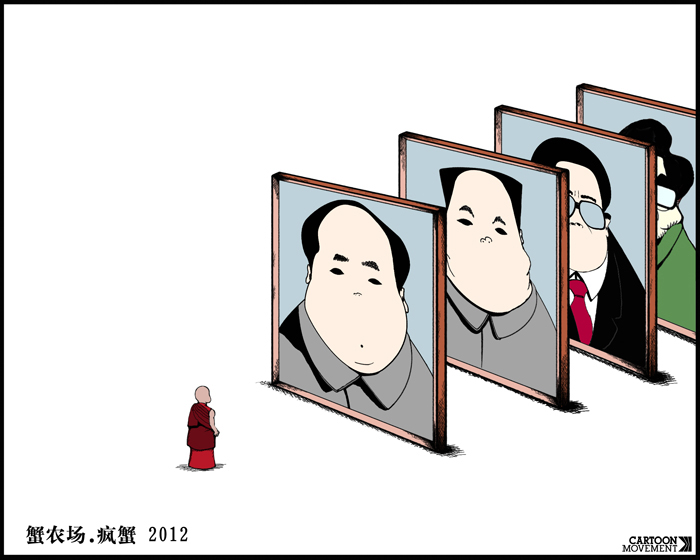 ‘Crazy crab’ is a cartoonist originally from China, but nowadays he lives in Finland. The Chinese government censored his work by ordering websites to remove his cartoons and by deleting all references to him in Google-search results.

What inspired you to make this cartoon and what were the consequences?

‘The tank man and those Tibetans who set fire on themselves inspired me. When I drew this cartoon in January of 2012, there were seventeen self-immolation cases in Tibet already. At the end of that year that number was 102. No Chinese cartoonist wanted to touch this issue, so I thought maybe I could make a change. I drew a series of Tibetan issue cartoons, not only to record the events and respond to their voice, but also to raise awareness of freedom of speech and freedom of religion in Tibet. I don’t know what the consequences are. But what these Tibetan did, their protest, lighted up my heart.’

In which ways is freedom of press restricted in your country?

‘The Propaganda Department of the Chinese Communist Party is working hard to delete anything they don’t want people to know. All media are being controlled. There are very strict censorship rules you must follow, otherwise you might get into trouble. The Great Fire Wall system blocks any website they don’t like. For example we can’t use Facebook, Twitter, YouTube, Wikipedia and G+ in China. Most of young Chinese people don’t even know them.  The ‘sensitive word’-list is updated daily and delete any word or article that might endanger the Party’s ruling. The list is updated every day. If I want to post a message about “self-immolation” in Tibet on a Chinese website, the system will check the message with the sensitive word list first. If the word “self-immolation” is on the list, the message cannot be published. The same method is also used for newspapers, books, music and movies. If someone keeps posting sensitive issues in China, the security police will find him and warn him and even his family. Some artists and authors including Mr. Liu Xiaobo, were arrested and put in jail.’

How, in your opinion, can cartoons contribute to greater freedom?

‘Cartoons are the nightmares of the censorship system because unlike words, the check can’t search through drawings. Therefore, it’s more difficult to trace drawn satire. A sharp political cartoon can spread widely before the internet police figures out its real meaning. I think the political cartoon is a “laugh bullet” that can penetrate through lies and fear. A good cartoon can say more than a thousand words. When people laugh, they will think too, in a new perspective.

About the cartoon: to celebrate the Lunar New Year, the Tibet Autonomous Regional government distributed more than 1 million flags and portraits throughout Tibet, to places including temples, schools and rural households. The portraits depict the four-generation central leadership, represented by Mao Zedong, Deng Xiaoping, Jiang Zemin and Hu Jintao. Padma Choling, chairman of the regional government, said that hanging the portrait expressed the heartfelt gratitude of Tibetans for the People's Republic of China (PRC) central government and the Communist Party of China (CPC).