Political Cartoons and the Israeli-Palestinian Conflict 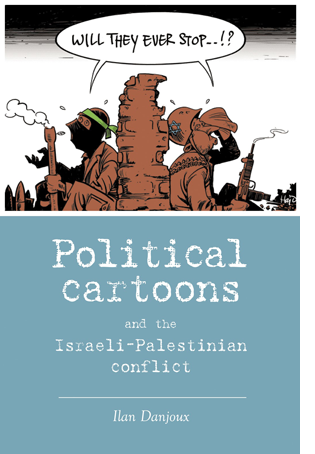 His line of reasoning starts with the assumption that political cartoons have long been safe havens for extreme opinion and unfounded accusation. Looking at how political cartoons demonised Jews in Nazi Germany or Tutsis in Rwanda in the early '90s, it is clear that sometimes cartoons become propaganda, and targets of ridicule become victims of violence. Building on the special role of cartoons in conflict areas, Ilan Danjoux sets out to explore if cartoons can actually predict violence. Focusing on the Israeli-Palestinian conflict, and on the 2000 Al-Aqsa Intifada (uprising) in particular, Danjoux examines if there was a shift in the style, content and focus of Palestinian and Israeli political cartoons preceding the outbreak of violence.

In the introduction, he already provides an answer to this question. His research shows cartoons cannot predict violence; rather, they function as a kind of seismograph. The shift in content and focus of cartoons reflects the shift and focus in public opinion. So the obvious question is: why read a book in which the plot is given away on page 2? The answer is that you shouldn't read this book for its plot (the question if cartoons predict violence), unless you are a student of social research. If you're a cartoon aficionado or cartoonist (I happen to be both), you should read this book for the interesting insights it gives about political cartoons and how they work.

According to Danjoux, cartoons are special in a number of ways. They have an exceptional role within journalism, because they do not have to be evidence-based. Cartoonists play with the truth, mixing it up with fiction, myth, symbols and historical references. In his book, Danjoux identifies the main tools cartoonists use. Interestingly, exaggeration (a tool often employed in cartoons) is sometimes not needed; placing the main character in a cartoon at a table with Adolf Hitler will immediately convey meaning, although what meaning is dependent on the action depicted in the cartoon and the facial expressions of the characters in the cartoon.

Because cartoons are not bound by the truth, they are one of the best ways to gauge public opinion. Although opinion polls might give accurate figures, they might not reflect the entire truth, as people will often give answers that are socially acceptable, rather then saying what they think. The instruments employed by the cartoonist, such as exaggeration, symbols and metaphors, can convey the mood in a country better than polls. Another important point that Danjoux makes is that cartoons are incomplete narratives. Because they are often bound to current events, the outcome of the situation they depict is not certain yet. Several outcomes are possible, and it is left to the reader to interpret which outcome should be feared, and which should be desired.

This toolkit for analyzing cartoons is then applied to the Israeli-Palestinian conflict, and in particular the outbreak of violence in October 2000, after the Oslo Peace Process collapsed. What is probably most interesting, is how cartoons can be compared as reflections of the public mood, even though the media of Israel and Palestine are vastly different. Isreael has a commercial, competitive and free media, while the media in Palestine is heavily censored and largely government funded. These differences do not inhibit the role of political cartoons to chronicle the conflict.

Some definitions in the book are too restrictive. Danjoux's statement that the main defining aspect of political cartoons is that they are bound to current events and therefore have a limited context in which they can be understood is flawed. Although this definition applies to lots of cartoons, it foregoes the equally considerable group of cartoons that deal with the more or less timeless issues of human rights, war, or the environment. Danjoux also devotes a lot of attention on the difficulties of reading cartoons, because they often employ symbols, inside information and word puns that can only be understood within the cultural context they were published. Again, this is true for many cartoons. But cartoons can, and many do, also employ symbols that have universal appeal. Especially cartoons that do not have any text and rely entirely on visuals can be understood throughout the world.

Another problem of the book is the price. I doubt many people outside academic circles would spend more than 80 dollars on a book of barely 150 pages. For a wider appeal, Ilan Danjoux might consider publishing a non-academic paperback on how to read political cartoons.

In spite of the minor flaw of narrow definitions (which might be needed, given that the book is devoted to social research) and the bigger hurdle of the price, the book is definitely worth reading. It is an especially interesting read for cartoonists. At the beginning of this review, I mentioned how, at Cartoon Movement, we often talk about the positive aspects of political cartoons. This book shows how cartoons can be deconstructed, and how to analyse the different elements of cartoons, such as the tone of the cartoon, the symbols it uses and the focus. All these aspects say something about the meaning of the author, but, more importantly, also how the cartoon will be read by the audience. After reading, I found myself regarding my own and fellow cartoonists' work with a new set of eyes. If we cartoonists want to live up to our (mostly self-proclaimed) title as watchdogs keeping check on those in power, we are also responsible to keep check on our own work. At the one hand of the spectrum, there is the danger of self-censorship, and at the other end cartoons become unsubstantiated propaganda. To stay in the middle, a cartoonist needs to understand the tools he uses to make cartoons work (beyond pen, ink and Photoshop). And that is exactly where this book can help.