'Of Course There Is Censorship'

Our cartoonists come from all over the globe, but some countries are better represented than others. Cuba is such a country. Over the last months, we have welcomed several Cuban artists, and we have become curious about the cartooning scene in Cuba. We talk to three Cuban artists about political cartoons, censorship, and the future of Cuba.

What, in your opinion, is the power of political cartoons?

Adán Iglesias Toledo: Political cartoons are drawn chronicles of national and international events. They are as important as the TV news. Today and especially with youth who read very little press are more important to provide important information in short.
Alfredo Martirena: Cartoons in general have a great impact on their readers. Political cartoons also have the advantage that since their text has to be synthetic and intelligent and give a message, the reader can assimilate this rapidly. It all fits in one frame and a quick look at it gives a general idea of the conflict in question.
Osvaldo Gutierrez Gomez: The political cartoon has the power to express and report successes and failures of the political system of each country or government, but always according to the opinion of the artist or the medium in which the cartoons appears. 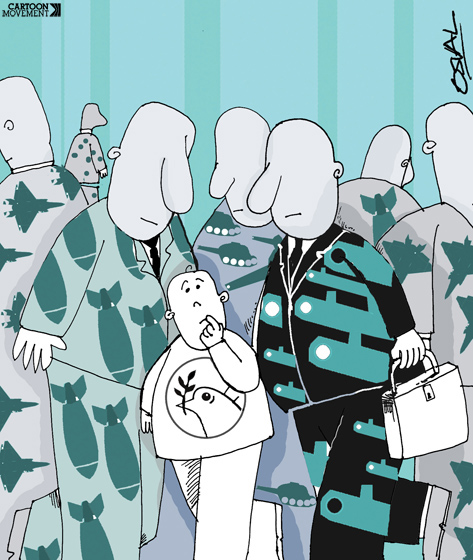 We have a lot of cartoonists Cubans here in Cartoon Movement. Are there many artists in Cuba (and if so, why)?

Adán: Cuba is an island unknown in many aspects. It has a long tradition of humor and literary figure but is little known. Certainly there are many editorial cartoonists in Cuba, and of good quality. Although there are few newspapers to publish the pictures (before the collapse of the socialist bloc in Europe there were more spaces), the best dailies have remained. The Internet is used by the new generation of artists, especially those doing contemporary art.
Martirena: In Cuba there is a strong team of cartoonists, part of a tradition that began in the early 1900s. All the publications at that time started to include cartoons to illustrate serious articles. In Cuba we have three major cartoon and comic publications: Melaito, DDT and Palante. Each one of them has been around for over 40 years, which makes for possible for young cartoonists to have a podium for their work; this way the number of good cartoonists increases.
Osvaldo: Yes, Cuba has always been a country of great comedians. Cubans say that we laugh at our own evils, and the cartoons are the perfect way to do this. We have a humorous publication, Palante, with over 50 years of existence, where this history and tradition is maintained, although currently there is a crisis in the publications, due to the shortage of paper and the economic situation in the country. We also have two of the most awarded cartoonists in the world: Ares and Boligan. 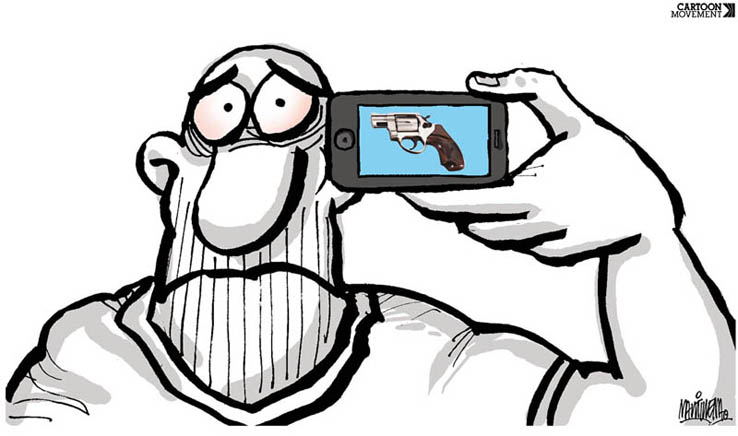 'The Price of Progress' by Alfredo Martirena

Is there a lot of censorship in Cuba, and how do you deal with censorship? What (if any) are subjects you cannot draw about?

Adán: Of course there is censorship. I do not think there is a country where this is not present. In the Cuban case it has its peculiarities. On of the criteria for the press is that everything published should have an eductional value; many topics are not published because they supposedly lack this educational value. Some of these topics, in my experience are: religion, racism, homophobia. But
there are others that are difficult to classify, and cartoonists are sometimes clever in the way they subtly include topics in their work.
Alfredo: I believe that there is censorship in media all over the world, starting with editors, in accordance with interests supported by the big news corporations, which silence inconvenient news and promote and adulterate others akin to their interests. We may have censorship in Cuba, but in my case, as a cartoonist, I have not felt it. I collaborate with many international media, magazines, and I have never felt limited and the works I sent have never been censored. Cartoonists here have a good sense of ethics, which guide our work. For example, here in Cuba we are not used to seeing cartoons of our politicians from the past 50 years, but not because it is prohibited, and some cartoons about our current president have been published. With the new economic reforms, there have been some calls for the press to criticize and point out what’s wrong in the country, but that most of the times stumbles upon the middle bureaucrats which excel at making our work difficult. That’s where I see the censorship in our country.
Osvaldo: I belief there is some degree of censorship everywhere in the world. Here in Cuba there is censorship as well, with a single party and media who all report on the same issues. I also belief that there is more self-censorship than censorship, a cartoonist not doing a cartoon on a certain topic, thinking it will not be published. As for me, I have never let that stop me, and will do a cartoon anyway. If they publish it or not, that is no longer my responsibility. I think that many of our artists are on the side of the Revolution and its leaders, and criticism is often about the social problems that exist in my country. 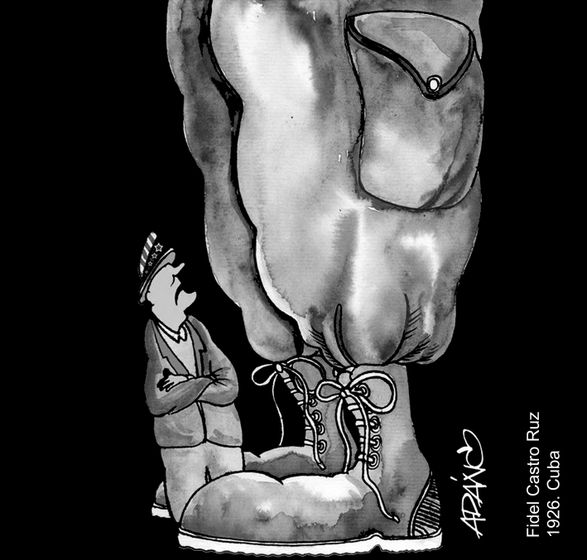 
How do you see the future of Cuba?

Adán: Cuba is a socialist island just meters from the great imperialist power, the United States of America. This closeness has determined the existence of many Cubans. Whoever denies the blockade on Cuba exercised this power has not been on this planet more than 20 times when the United Nations has voted against it. This is a major constraint to living in this country, but it is a big mistake to hold our government responsible for the blockade. In Cuba, there is a large bureaucracy which keeps on growing. Significantly, President Raul Castro, Fidel's brother, has taken many measures to combat bureaucracy and inefficiency, but it still dominates the state apparatus. I think the current reform of the economy will contribute to a better country.
Alfredo: I envision a better future for Cuba. I think it will depend on better relations with the USA. If the USA lifts the 50 year-old embargo, Cuba would progress rapidly because of its highly educated population besides its scientific and technical potential.
Osvaldo: Cuba, in my personal opinion, is doing, economically and politically. what it should have been doing ten years ago: removing laws that should never have existed in the first place, but saving the key achievements of the Revolution, such as healthcare, education and sports for all. Cuba is a generous and peaceful country, and should be rewarded for its efforts through the years, facing the most arrogant and deadly enemy of the planet, the government of the USA.

What role can political cartoons and cartoonists play in shaping this future?

Adán: Fighting that bureaucracy is fundamental to the future of prosperity we all desire. I do not think the artists can change the world, but at least we can influence consciousness. Humor is the best weapon against the bureaucracy, but the artists who have a large podium, such as the Cuban daily Juventud Rebelde (Laz, Falco and I) have the great limitation (and here appears again the issue of censorship) that sometimes what we publish in our newspaper is assumed as the editorial judgment of the whole paper and the country and not the artist's personal opinion. So editors can be reluctant to print cartoons on cerain topics.
Alfredo: We can be like a bridge and in fact somehow we’re starting to make some steps in that direction, showing the world our truth, which is not always presented as such by the big transnational media.
Osvaldo: With cartoons, we are able to expose our mistakes without fear of being criticised or censored. It is the duty of all Cubans to create a more democratic Cuba. Do not fear the truth and accept it, no matter how hard.But it is alway up to us Cubans to make decisions about our country, without outside interference.

Maybe the headline is kind of poorly chosen? I may be interpreted by readers that there is a special censorship in Cuba while the cartoonists' answers don't mean exactly that...

I would suggest something more in accordance with the response.

Anyway, very interesting interview and the job of Adán, Alfredo and Osvaldo is great.

Thanks for your feedback, Sete! This headline took some thought, and I agree it is not the most accurate description of the response from the cartoonists. Rather, it is meant to make readers curious (enough to read the interview). The first headline I considered was 'Cartooning in Cuba, but thought that was too dull, so I changed it too 'Of Course There Is Censorship, There Is Censorship Everywhere.', but that was too long, and didn't look right on the page. So that's why I ended up with this shorter title...