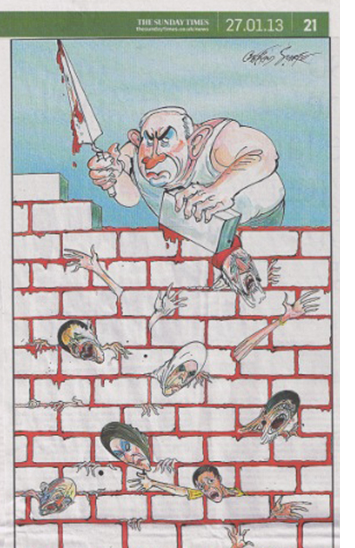 A cartoon by Gerard Scarfe, published in the Sunday Times last Sunday, has rekindled the ongoing discusssion about the right (the necessity, even) of cartoons to insult, and the limits to this right. The cartoon depicts Benjamin Netanyahu building a wall, using blood for mortar. The moment of publication coincided with Holocaust Memorial Day. The cartoon was met with outrage, and accused of being anti-Semitic, especially because the blood would refer to blood libel, a mythic belief that drinking human blood is part of Jewish religious rituals, often referred to in cartoons about Israel that appear in the Arab press. This latest controversy gives a good overview of the debate about cartoons and freedom of expression in general, and mocking Israel in particular:

Procartoonists.org (the blog for professional UK-based cartoonists) notes that it is rare for a journalistic publication to apologize, and that 'any regret expressed has been directed towards the timing of publication'. However, Rupert Murdoch, the publisher, did issue a public apology for a 'grotesque offensive cartoon'.

Anshel Pfeffer, columnist for Israeli daily newspaper Haaretz, has written an interesting piece arguing  the cartoon of Netanyahu isn't anti-Semitic in any way, pointing to the fact that there is no reference at all to the Jewish religion in the cartoon. Read the article for three additional reasons why the cartoon should't be considered anti-Semitic.

BBC radio hosted a rather lively debate between Jewish Chronicle editor Stephen Pollard, and Guardian cartoonist Steve Bell, to which you can listen here. It is an interesting, if sometimes chaotic, discussion, with some good points raised. Steve Bell argues that a similar cartoon with Assad instead of Netanyahu would have evoked no reation at all, while Stephen Pollard states it is the right of the media to publish these kinds of cartoons, but they should be aware of the consequenses.

In our own newsroom, Egyptian cartoonist Sherif Arafa responds to the controversy with this cartoon.