It has become a yearly tradition to collect the Christmas cartoons from our artists for a slideshow. We wish everyone a Merry Christmas and all the best for 2013! View the cartoon collection here. 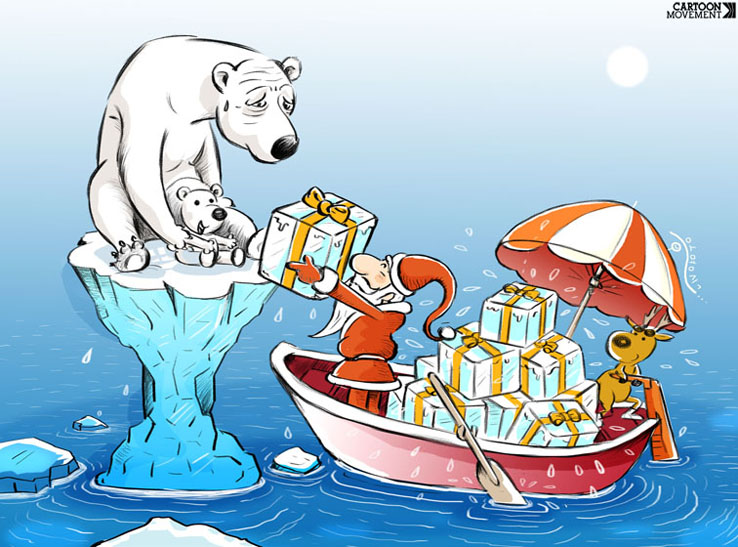 Freedom and Religion: Do They Clash?

Our project 360 Degrees is entering the third week. For three months, our cartoonists will be drawing cartoons based on your tweet on a certain theme. This week's theme is:

Freedom and Religion: Do They Clash?

Tweet your perspective including the hashtag #360D, and your tweet will appear in our project newsroom, and could be the made into a cartoon by our professional cartoonists. Every week the two best cartoons will be published on our homepage, and by Radio Netherlands Worldwide, as well as various media partners in the Middle East. If the cartoon based on your tweet wins, you win a high quality art print of the cartoon, or a t-shirt with the winning cartoon. 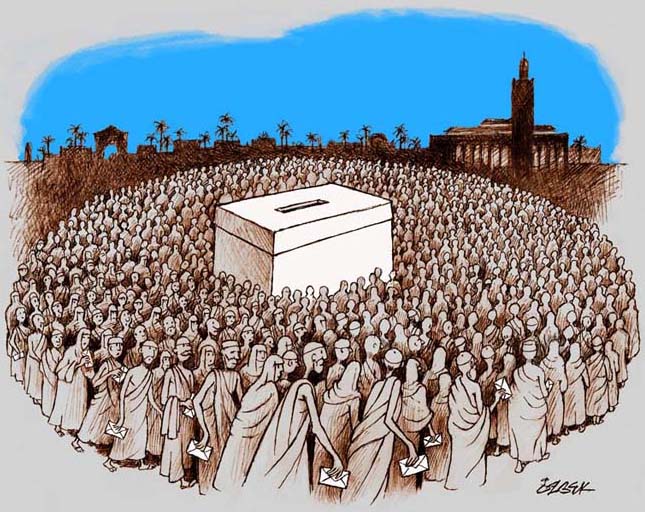 We are delighted to welcome Egyptian cartoonist Doaa Eladl to our community. She has worked for various newspaper in Egypt, and currently publishes in prominent newspaper Al Masry al Youm. Last year, we interviewed Doaa about her work.

Today we are two years old. Although our second year was probably not as eventful as our first (Arab Spring, Occupy, a trip to Haiti – read about all we did in 2011 here), we did some pretty cool stuff. It was also a difficult year for us. Cartoon Movement launched in a period when funding was readily available for innovative ideas in the Netherlands (our base of operations), but the crisis in the eurozone and austerity measures have had a severe impact on our financial base and outlook. One of our aims when we started with the platform was to become financially independent as soon as possible. Economic developments have forced us to redouble our efforts to reach this goal, and although the future remains uncertain, we are busy with numerous cartoon-projects that will allow us to keep Cartoon Movement up and running for the foreseeable future.

2012 started with Haiti week, showcasing Haitian cartoons and Haitian comics journalism about life in the tent camps, two years after the earth quake. Also very impressive was the video (featuring animation) about homophobia in Haiti. After Haiti week, we opened an exhibition at the London School of Economics, showing a series of cartoons we produced to illustrate their research project on justice and security in post-conflict areas.

In February we published the first chapter of the impressive 100-page non-fiction graphic novel Army of God, that explores the history of the Lord's Resistance Army. All eight chapters were published throughout the year. Army of God wasn't the only impressive comic to be published this year. One noticable development is that more and more comic artists take advantage of publishing online by including photos, videos and audio files in the comic. See some great examples here and here. The subjects ranged from undocumented immgrants in the US to the London Olympics. On of the highlights of the year was Tibet's Sacrifice: Exiled Lives by Dan Carino, which caused Cartoon Movement to be censored in China. 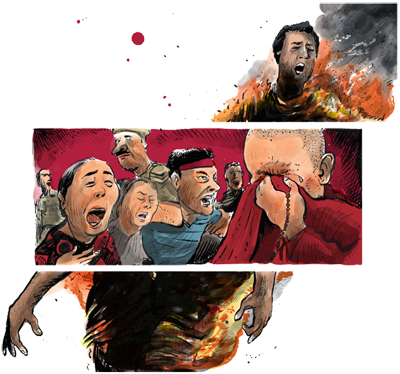 And of course we also published some great cartoons. Our community has expanded to over 200 professional cartoonists, and they have contributed to some amazing projects in the past year. These projects often focus on broader themes such as peace, freedom and poverty, but also more specific subjects like the elections in Mexico. New this year is that we're using social media to crowdsource topics for cartoons. Your Peace Retweeted pioneered this new approach, and our new project 360 Degrees is centered around a weekly Twitter debate on a certain theme, inspiring cartoonists to visualize the different perspectives.

We are more than thankful for all the support we have received from artists and from our audience, and we're committed to being around for a long time to come. In 2013, we hope to expand our community further, both artists and audience. We might venture into the field of animation, because lots of people have been nagging us about it (and it seems a logical thing to include on the website). We hope we can count on your continued support. If you want to help our effort, consider buying a t-shirt; and if you work at or know an organization or publication that would benefit from a cartoon or comic project, send us an email. We'll gladly discuss the possibilities.

Radio Netherlands Worldwide writes about the first week of our joint project 360 Degrees:

“Is this the moment for more freedom?” RNW’s Arabic Department, Cartoon Movement and media partners in the Arab region posted this question on social media sites during the first week of 360 Degrees, a new project designed to look at the world from different perspectives. People were invited to tweet their views using a common hashtag: #360D. Cartoonists drew cartoons based on the tweets.

The freedom theme was particularly relevant to the current situation in Egypt, where supporters and opponents of President Mohammed Morsi are engaging in daily protests and discussions about the new constitution and the division of powers in the country.

Look at yourself! Stereotypes from East to West.

We are entering the second week of our project 360 Degrees. For three months, our cartoonists will be drawing cartoons based on your tweet on a certain theme. This week's theme is:

Look at yourself! Stereotypes from East to West.
Tweet your perspective including the hashtag #360D, and your tweet will appear in our project newsroom, and could be the made into a cartoon by our professional cartoonists. Every week the two best cartoons will be published on our homepage, and by Radio Netherlands Worldwide, as well as various media partners in the Middle East. If the cartoon based on your tweet wins, you win a high quality art print of the cartoon, or a t-shirt with the winning cartoon. 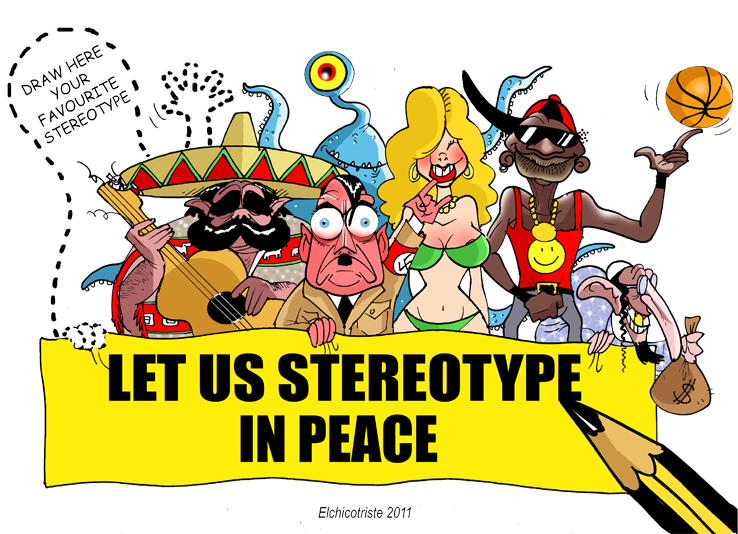 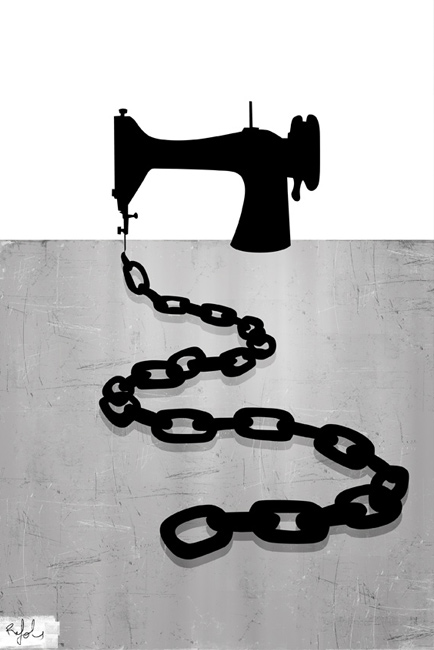 The newest member of the Cartoon Movement network is Lluís Ràfols, a cartoonist and illustrator based in Buenos Aires, Argentina. He often published political work in La Directa. Check out his website here.

Egyptian cartoonist Amr Okasha reports he is working in difficult circumstances in Egypt:

Who can imagine this is the New Egypt that we made a revolution for! As a political cartoonist, I'm facing a much more tense and challenging time than during the Mubarak regime. Now, every time I publish a cartoon, I receive very insulting and offensive comments. Most of these are made by supporters of president Morsi and members of the Muslim brotherhood. They accuse me of being a liberal socialist infidel. They say my criticism of Morsi and the Muslim Brotherhood is criticism of the Islam. Islamist leaders and supporters call any critique on the regime an attack on religion.

Recently, I have published a number of cartoons that seem to have made them mad. I received insulting messages via Facebook as well as in the comment section of my newspaper's website. Even more alarmingly, a photo of me was posted during a pro-Morsi demonstration last Saturday. My picture was posted along with other photos of public figures in the media; protesters chanted they wanted to get rid of these persons.

I'm going to continue to publish what I see and believe is the truth, but I want to admit that I'm worried too.

This slideshow features some of Amr's recent cartoons: 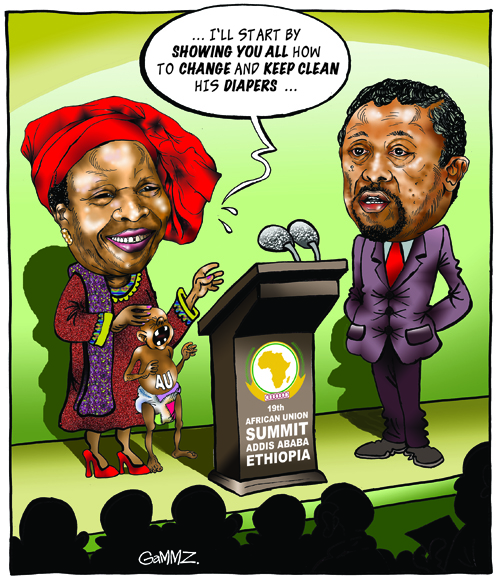 Eric Ngammau is an editorial cartoonist from Kenya. His cartoons appear four times per week in Kenya's oldest newspaper, The Standard. He also contributes to Africartooned! and New People.