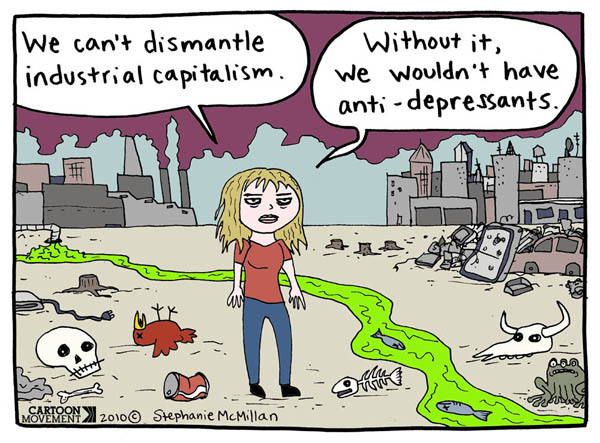 “Code Green” is, as far as I know, the only regular editorial cartoon in the U.S. devoted exclusively to the environmental crisis.[...]There’s a problem though. We all know print media has crashed. Editorial cartooning, as a profession, has crashed along with it. Three and a half years ago I was laid off from the paper where I worked (it later folded). So I went freelance. But print media no longer pays very much for content. Websites often refuse to pay anything at all. Consequently, it turns out I’m unable to make a living this way (defined as: very basic food, shelter, health care, and transportation). This is not unusual for cartoonists these days. Many excellent cartoonists have had to quit and find other kinds of work. I may be next.

Stephanie is turning to her readers to ask for support to continue the cartoon. She is looking to raise 9000 dollars, which will keep the cartoon series going for another year. To read more about her campaign, or to support Stephanie, visit her page at indiegogo.com.