Thodoris Tibilis is a freelance artist from Greece; he recently joined our community. Thodoris is a commercial illustrator, with a client list that includes The Coca-Cola Company, Procter & Gamble and Unilever. He joins Cartoon Movement to express his own views. We talk to him about cartoons, politics and commerce.

Thinking this way, and having the ability to draw, I thought of political cartoons as the best way to make my voice heard by more people. 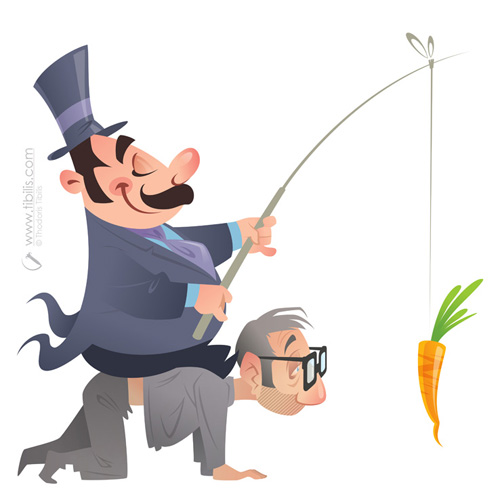 Many editorial cartoonists tend to have pretty strong views towards capitalism, big companies and exploitation. Do you share these views, and have you ever rejected a commercial commission on ethical grounds?

Capitalism has turned out to be the face of greed and it can't be a fair society's base. Big companies and exploitation are just the most obvious parts of capitalism. Capitalism promotes competition. The goal of the individual is more money and more power and as a result each one cares only for himself and it further leads to isolation. Ignoring that everyone of us is an integral part of the society is actually acting against society, against oneself. Capitalism is acting like an autoimmune disease attacking itself.

I think that is impossible to live outside the society and as far as the society is a capitalist one, we live in it facing its ugliness. I think that societies change through numerous fights. Through each tiny victory achieved by individuals or groups of people. Things would change only if we decided to fight for it and thankfully this is where we are in the history's timeline.

As a commercial illustrator I have rejected commissions on ethical grounds. Projects that were promoting political parties as well as projects promoting racism.

In your application you mentioned that you do not work for a political newspaper or magazine because you want to have your own voice in your political cartoons. In what way do you feel your perspective would be restricted by working for a newspaper of magazine?

I wouldn't like, for example, to start making political cartoons for a newspaper that I think of as independent and then realize that it supports a certain party, or is sponsored by a company that can influence the newspaper's "beliefs". I wouldn't like the fact that in a way I supported it with my opinion.

In commercial illustrations I set my ability to draw to the client's service in order to get exactly the illustration he wants as long as this has nothing to do with my ethics. In political cartoons, on the other hand, I would not accept any kind of censorship, instructions or alternations as I consider them as a censorship to my ethics.

You live in Greece, a country that is currently facing a deep crisis. How do you perceive the current turmoil, and how does it affect your (political) work?

In Greece things are getting worse every day since it was illegally decided that the whole country be sold against the will of the people living in Greece. It was decided that we have to pay in order to save some private companies just because they are banks. The pensions and the salaries are being cut. Laws have been used against people and their rights. Every day more people need to search trash cans in order to find something to eat. Days pass by and those who are responsible for this situation go unpunished even when each day people commit suicide because of this.

The crisis of course caused huge demonstrations. People shouted loudly against austerity measures. I was there. Every time the same story. Demonstrators were peaceful and police was so brutal against them. Police, without any excuse, attacked peaceful demonstrators, even elderly people, using batons, throwing stones, tear gas and chemicals forbidden even in wars. Many people were injured and some of them have been permanently disabled. Several videos proving police brutality are available on the internet . Amnesty International as well as numerous Greek organizations denounced these practices.

The  bankers and the vast majority of politicians, powerful businessmen, mainstream media and police are against the rest of the people. This is of course an unfair fight. If you also consider that they also use their laws against people you will have a more complete picture.

The whole situation affected me as I could definitely conclude what was coming in the near future.Many people still get "informed" from the mainstream media, soI did just what many Greek citizens did. I tried to react and make my voice get heard. I was just one of the demonstrators. I was just one of the people that used internet platforms and social media to make the message travel across the globe. I just added some political cartoons some times instead of text comments, so I don't consider myself as a political cartoonist. 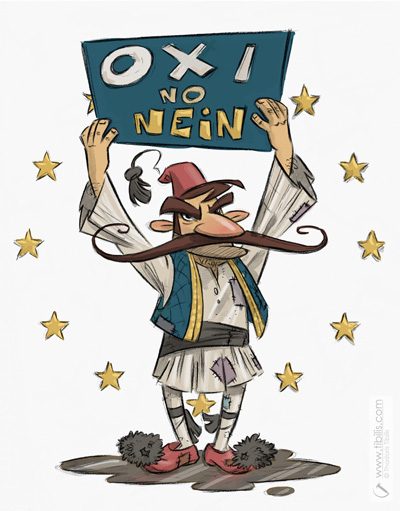 What do you hope to achieve with your (political) work?

I hope to add one more point of view with my political cartoons. The more points of view people have, the closer to the true story. I know that my contribution would be just a "grain in a dune" but this is just my part. We are many people thinking this way and I wish more people will contribute any way they can and make this "dune" really huge.

Cartoons are more educative as a picture speakes more that a thousan works!