Chicago Is My Kind Of Town by Luke Radl

Today Cartoon Movement publishes "Chicago Is My Kind Of Town" by Luke Radl, a multimedia report on the protests against May's NATO Summit in Chicago. Radl takes us into the days of street protests from inside the crowds, as veterans discard their medals and police beat back protesters, embedding audio interviews, video, and photos into the pages to make it one of the first comics of its kind.

"Rendering all my text with html makes this (I think) the first comic report to be really search engine friendly," Luke says. "You can also explore each panel revealing asides, photos, audio, etc in a way that makes it more participatory. I wanted to put people in the shoes of someone who was there, and the multimedia aspects are kind of a way of saying "walk around." 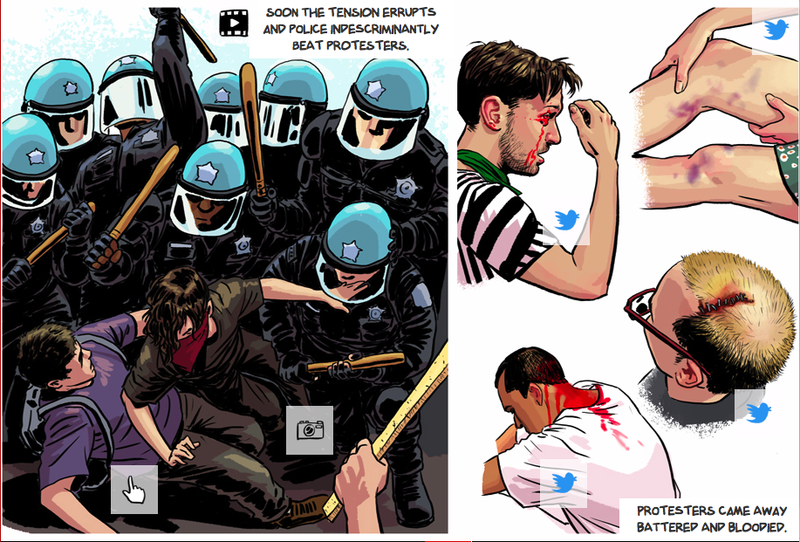 "Being there was mostly running around with my camera trying to take as many pictures, audio, and notes as I could without getting arrested," Luke says about his reporting process.  "I wasn't sure what would be relevant when all was said and done so I wanted to have a robust timeline to work from."

"The best I can hope is that it gives people a unique perspective on the NATO summit protests in a way that's coherent and engaging," Luke says. "Events like this can sometimes end up reduced to a lot of statistics in our minds, and hopefully I'm able to humanize it a little without losing sense of the scale."