The decline of print media continues to hit cartoonists hard, with no end in sight. In America, the Times-Picayune in New Orleans cut half of its news staff as they do away with a daily print edition and transition to the web. Longtime editorial cartoonist Steve Kelley was among those let go.

We also learned this week that Ed Stein is throwing in the towel on editorial cartooning. After losing his job at the Rocky Mountain News in 2009, he tells Michael Cavna of the Washington Post, "I have no idea how to make a living as an editorial cartoonist now.”

In his exit interview with Cavna, Stein leaves us some words of wisdom.

Having a political philosophy and point of view isn't enough. Don't illustrate the news. Draw about the issues behind the events, not the events themselves. Advocate for people, not politicians. Don't be an unpaid huckster for a political party. Resist the temptation to support their daily talking points. Constantly question your own motivation. Do your research. Know the facts and avoid the spin. Admit it when you're wrong. Don't be lazy; don't do what everyone else is doing. Support ideas, not ideologies.

I think this is good advice for anyone working in media, but particularly as we enter a presidential election where much of the news cycle revolves around contrived controversies and horserace coverage, and drawing about "the issues behind the events" is lost to the traffic-hungry news cycle. 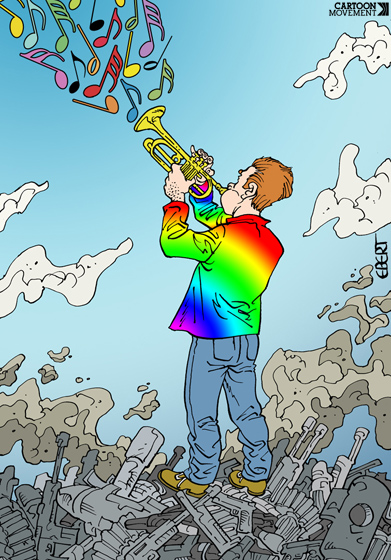 MasterPeace has announced the winner of 'Your Peace Retweeted':

Although we have seen many inspiring messages and a lot of beautiful cartoons, we had to make a decision. After a long deliberation, there was only one cartoon that stood above the other great cartoons at the Cartoon Movement website. Therefore we proudly announce that the winning cartoon is:

'Music above fighting' by Enrico Bertuccioli.
The tweet was sent in by @robertvhoesel

We would like to thank all those that participated for their input and hope to see the same enthusiasm on the 21st of September.

The sender of the winning tweet receives tickets to Cairo for the MasterPeace Concert in 2014.

Today we publish the fifth installment of Army Of God, comics journalism on the Lord's Resistance Army by David Axe and Tim Hamilton. Catch up on previous chapters on our Project Page. 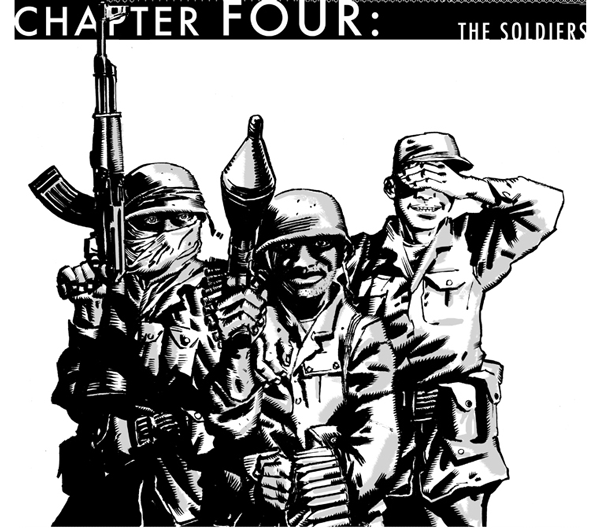 On Monday June 11, we will publish the fifth installment of Army of God, the graphic novel length work of comics journalism about Congo and the LRA by David Axe and Tim Hamilton. Chapter 4 is titled The Soldiers and tells about operation 'Lightning Thunder', a complex military operation by the Ugandan army against the LRA. 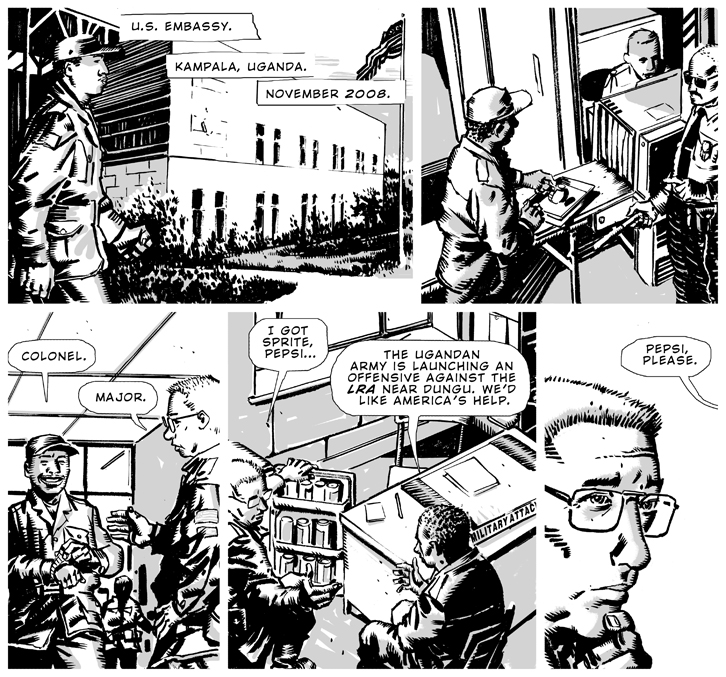 By Jannie Schipper (this interview was originally published in Arabic by Radio Netherlands Worldwide; republished here with permission) 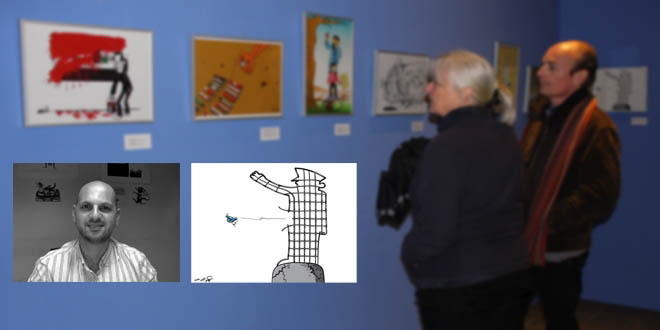 Jordanian cartoonist Omar Abdallat, winner of the Cartoon Spring Competition, considers himself an ‘eternal student’. While in the past he let university teachers and others stop him from drawing cartoons, since 2004 he decided that he and his colleague artists had to keep defending humanity by their critical drawings. He is currently responsible for Rusoom.com, an important platform for Arab political cartoons.

What was your reaction to winning the Cartoon Spring Competition?

I was very happy, because the competition and its timing are very important to me. The subject  is considered to be an event that history will remember for a long time. I am honoured because there are names in the competition that I know very well, friends and colleagues whose work I respect and admire.

What are you trying to express with your winning cartoon?

The systems of tyranny in the Arab world try to brainwash their peoples’ minds, convincing them that there is only one person that can lead the state forever, and that if that person was not there, the state would destroyed and it become chaos. In other word, the leader is a god who can never make mistakes, and it is the leader’s right to decide about the country’s policy and economy, and about the dreams and fate of its people. This theory is promoted by the educational and media systems as well as the security grip that is unjust to anyone who thinks or says the contrary.

In my cartoon ‘Tweet of Freedom’, the tyrant or his system resembles the cage that has imprisons the thoughts of freedom, justice and equality and the expression of a different opinion. In the caricature I likened the thoughts of freedom and the ending of tyranny to the bird which broke the cage of the dictatorial systems and flew away to the free world. I chose the blue colour for the bird because it is the colour of the internet sites that played an important role in the erosion and detection of lies of the tyrant systems.

We understood that you stopped drawing for a while. Why?

Since my childhood, I had the ambition to draw cartoons to express thoughts, views and dreams. Unfortunately, in the period that I was a student in Jordan, school and university did not pay attention to the art of cartooning. On the contrary, my teachers forbid me to draw cartoons, considering it an impolite way of expression and an insult to the people who were the subject of the cartoons. I concluded that my cartoons only got me trouble and stopped for a long time.

How did you begin again and where do you publish now?

I began again to draw in the year 2004 by publishing my work on websites. In 2007, I founded a website for cartoons and animations together with a group of partners. I worked with a Jordanian newspaper for a while, but they ended the cooperation. I think the views I expressed in my drawings were one of the reasons. At the moment, I work in the network Kharabeesh as a cartoonist and a director and am responsible for www.rusoom.com , the platform for Arab political cartoons. I also publish my own work at my Facebook page. I participated in a number of Jordanian, Arab and international competitions and cartoon expositions and won some prizes before.

How do you see your future and that of the Arab youth?

I hope to continue in drawing and in learning more, because I believe we always stay students. The artist who thinks that he does not need to develop himself further, is considered to have ended his path. I also hope to stay active in the foundation that I am working in, to let my own cartoons and those of my colleagues reach the largest possible number of Arab readers.

When it comes to the future of the Arab youth, the picture is not clear with the chaos and bloodshed we see in some of the countries where the Arab spring revolutions took place, but while following the events, I found many Arab young people that have the ambition to rebuild and develop their countries. What I mean is that despite the difficult circumstances the area is going through, I have great hope that the Arab youth will successfully rebuild their countries. Simply because they never want to go back to the injustice they lived in.

Worth a Thousand Words 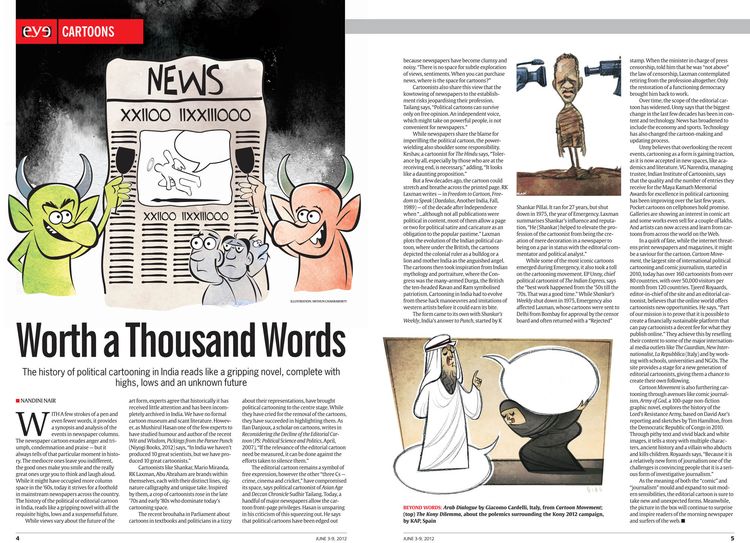 The Indian Express has published an article about the history of editorial cartooning in India; they also write about the future of the craft, and about Cartoon Movement as one of the platforms shaping that future: 'In a quirk of fate, while the internet threatens print newspapers and magazines, it might be a saviour for the cartoon.' Read the article here.

Three new cartoonists have recently joined our community; they hail from Turkey, Greece and the United States. 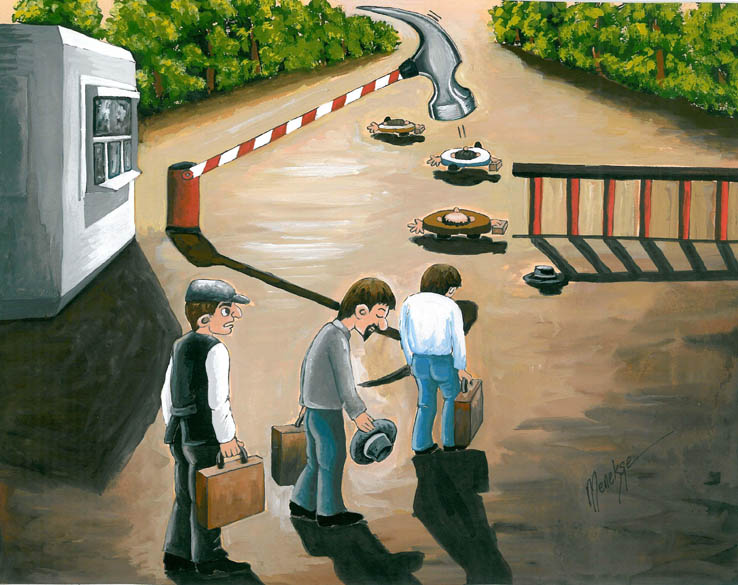 Menekse Cam is from Izmir in Turkey. She has been working as a visual arts teacher for 24 years. In the last years she has focused on doing cartoons; her work has been published in humor magazines in Turkey and Germany, and she has participated in numerous exhibitions. Visit her website to see more of her work. 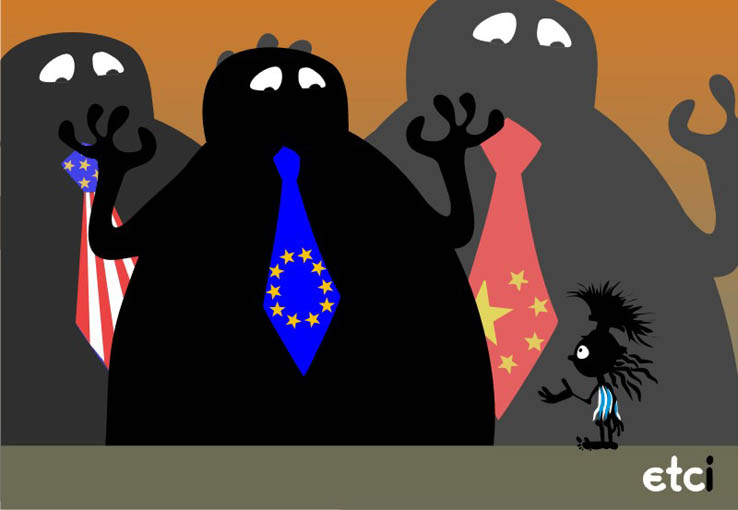 Elias Tabakeas from Athens has been a cartoonist since the 1980's, and started doing political cartoons since the financial crisis begun in 2008.  His cartoons, comics and illustrations etc have appeared in several Greek newspapers and magazines. He has been a teacher at the Ornerakis Cartoon School in Athens since 1997, and is a founding member of the GreCA (Greek Cartoonists Association). Visit his blog to see more of his work. 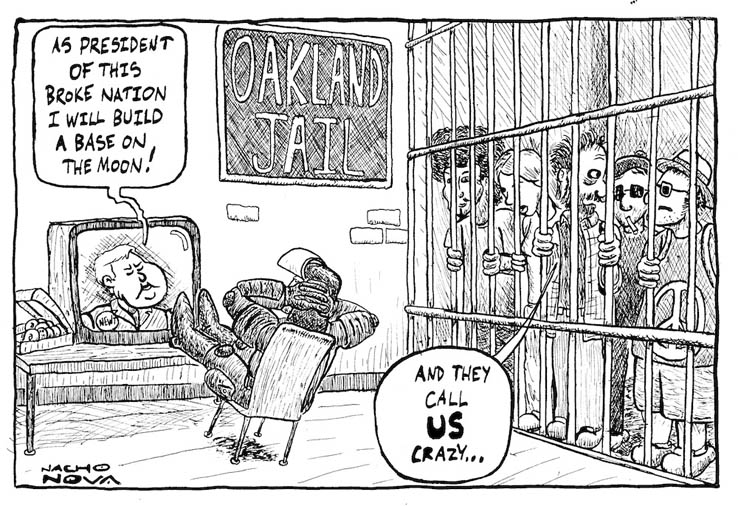 Eric Peterson, who publishes his work as Nacho Nova, is a comic artist and cartoonist currently residing in El Paso in Texas (USA). He is staff cartoonist at the El Paso Community College.

And the Winner is... 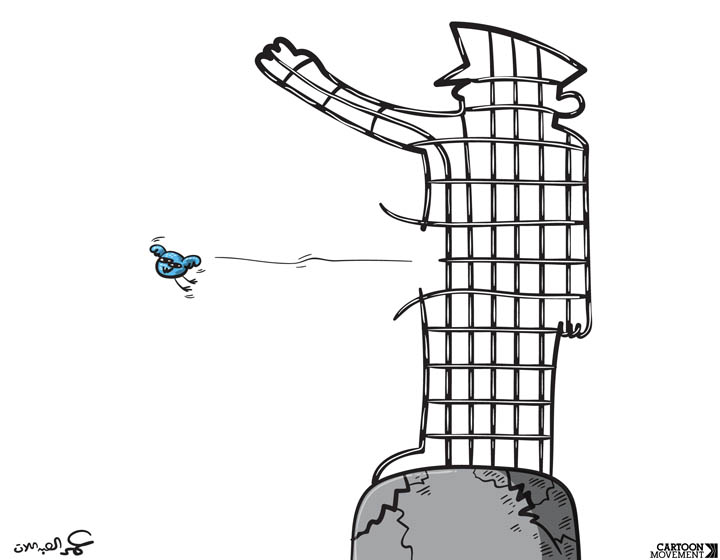 Omar Abdallat,  a 33-year old cartoonist from Jordan, is the winner of the Cartoon Spring Competition. His cartoon 'Tweet of Freedom', about the power of social media, was selected by a jury that included well-known Arab cartoonists Mohammed Gueddar and Kifah al-Reefi.

The Cartoon Spring Competition was organized by our partner Radio Netherlands Worldwide, in collaboration with the Dutch comic festival Stripdagen Haarlem. In the competition, young Arab cartoonists (under 35) were given the opportunity to share their perspective on the Arab Spring with an international audience.

Last week, we published the ten finalists. The cartoons were diverse in style and in vision. Some expressed  a sense of (albeit cynical) optimism in getting rid of the old regimes, while other cartoons warned of the dangers the future holds. According to the jury, the cartoon by Omar Abdallat is the winner because it is simple, strong and unique. As winner of the competition, Omar Abdallat will become a member of Cartoon Movement, so we expect to see a lot more of his work in our newsroom soon.