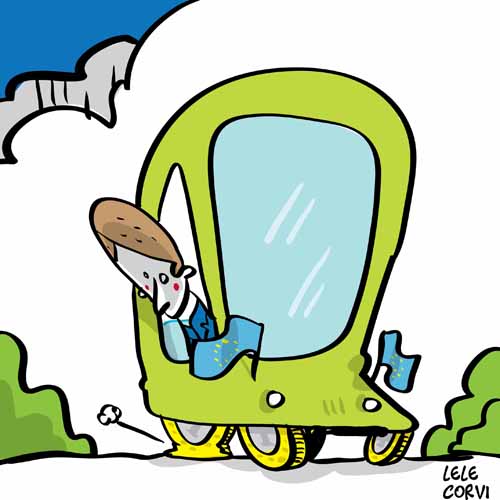 Gabriele Corvi is an Italian artist with a unique and recognizable style, characterized by simple, fluent lines. His work has appeared in numerous Italian publications; he has also published various cartoon books. Visit his blog to see all of his work (in Italian).

The Guardian has posted a video interview with Syrian artist Ali Ferzat. The video is first in a series the Guardian is producing on cartoonists from the Arab World.

On July 15, the award ceremony for the Press Cartoon Europe takes place in Knokke-Heist in Belgium. The first prize was awarded to Dutch cartoonist Jos Collignon. The award ceremony is also the opening of the yearly international Cartoon Festival. All the nominated cartoons will be exhibited at the Festival.

Preview: Chicago Is My Kind Of Town

Next Monday we're publishing another great multimedia comic, this one from Luke Radl on the NATO Summit protests that took over Chicago last month. In "Chicago Is My Kind Of Town" Radl takes us through the street protests from an on-the-ground perspective. Here's a preview page, from a protest where veterans discarded their medals: 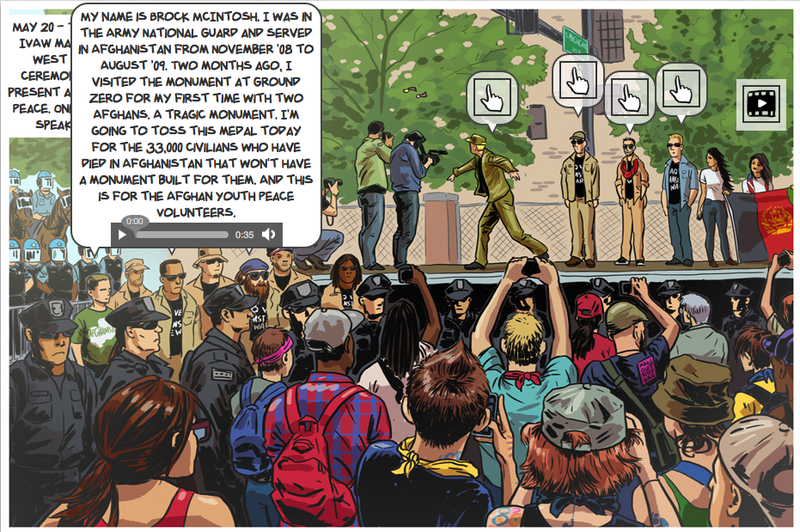 "Chicago" employs numerous multimedia elements embedded within its pages, allowing readers to explore it at their own pace. "Rendering all my text with html makes this (I think) the first comic report to be really search engine friendly," Luke says. "You can also explore each panel revealing asides, photos, audio, etc in a way that makes it more participatory. I wanted to put people in the shoes of someone who was there, and the multimedia aspects are kind of a way of saying "walk around." 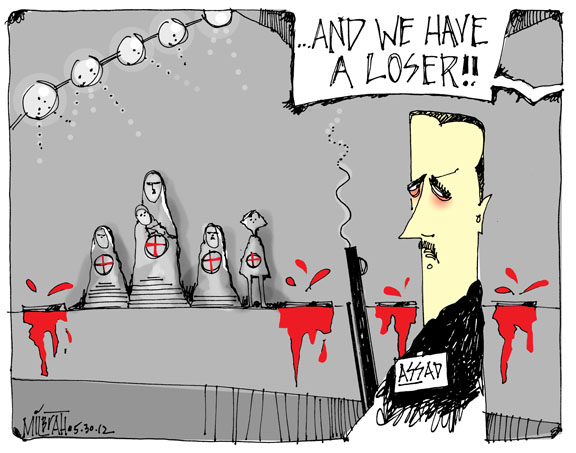 Deb Milbrath is a cartoonist and illustrator living in Atlanta, Georgia (USA). Her cartoons have been featured in the New York Times, Newsweek, the New York Daily News, Atlanta Journal Constitution, Pittsburg Tribune-Review and on CNN Headline News. To see all her work, visit Deb's website. 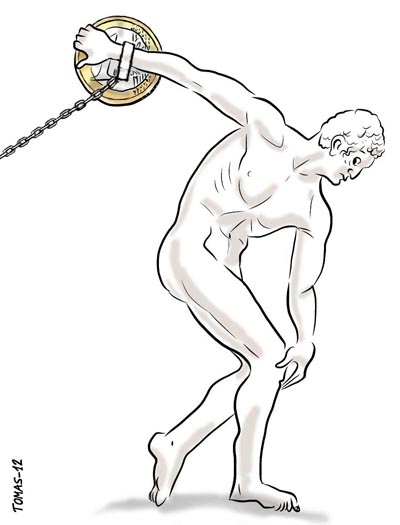 Another cartoonist from Italy has joined our ranks: Lamberto Tomassini (Tomas) is a self-taught designer from Rome. His cartoons range from computer graphics to traditional ink drawings, and have appeared in L’Unità and Il Fatto Quotidiano. To see more of his work, visit his blog.

The Oatmeal vs. FunnyJunk

An interesting legal battle about copyright infringement is unfolding between American cartoonist The Oatmeal (Matthew Inman) and content aggragator FunnyJunk.com. After The Oatmeal complained about FunnyJunk posting his work without credit or backlink, the website responded with the threat of a lawsuit, demanding a payment of 20,000 dollar. Here's how the Oatmeal responded.

South African cartoonist Jonathan Shapiro (Zapiro) has been awarde the 2012 IPA Freedom to Publish Prize. Bjørn Smith-Simonsen, Chair of IPA’s Freedom to Publish Committee: 'Jonathan Shapiro has had the enormous courage to draw and publish essential, and often controversial, political cartoons in newspapers and books for many years now. He has also been remarkably consistent in his fight for freedom of expression during the apartheid era, and in the years since it ended.'

We have a serious amount of comics journalism lined up for next month, with a new piece published almost every week. The subjects include protests against NATO in Chicago, the Olympics in London, and marijuana raids in California. Also coming up is the long-awaited next chapter of our Haiti-comic.

In this edition of Behind-the-Scenes, Italian cartoonist Enrico Bertuccioli shows us his work process:

'The first step is to make a draft of the cartoon. If I have a clear and simple idea in mind (as in this case), I try to draw it directly on paper, and keep going until the final draft, not making any preliminary study of the subject. If the concept is more complex, I draw some drafts to study the elements that I will put together in the cartoon and then I use a light table to assemble them in the right position. Then I ink the draft and when the ink is dried up I erase the pencil lines. The inked drawing is scanned to be finally completed adding colors, textures, writings etc. using Photoshop.

I like this mix of traditional drawing and digital coloring. I think that this unembellished use of digital coloring that looks 'simple' fits perfectly with my clear line- style and I think the final result works very well.' 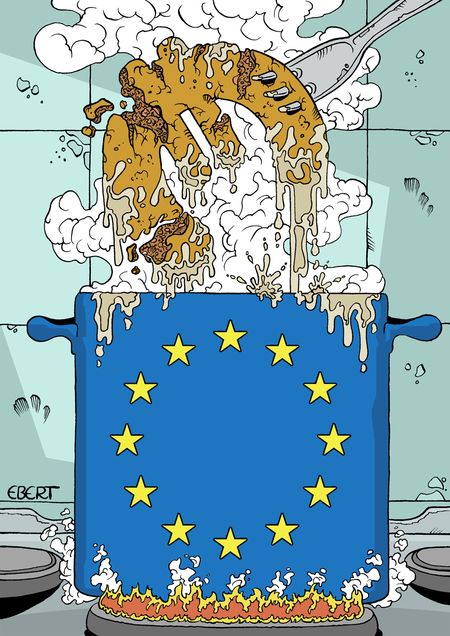 Glidden Raising Funds for Next Book

Here's a project worth supporting. Cartoonist Sarah Glidden is raising funds for her second graphic novel, Rolling Blackouts, which focuses on her trip to the Middle East with a group of reporters and a veteran from the Iraq War.

That trip resulted in a series of comics, including "The Waiting Room", which we published last year. Now Glidden is working on a full length book about her experiences, soliciting funds for the long slog it takes to produce this kind of work. Throw something in the pot and get some nice original drawings. 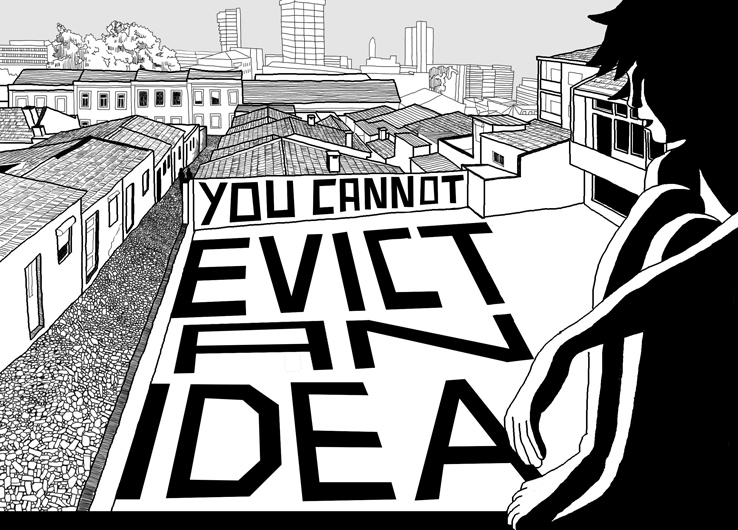 Gui is a 29-year old architect, activist and political cartoonist from Porto, Portugal. She creates posters and political cartoons; her work has been published in various newspapers and magazines in Portugal. Her first cartoon for Cartoon Movement was one of the most popular we ever published. To see more of her work, check out her online portfolio.

As a site that's dedicated to press freedom, we always run the risk of being censored by oppressive regimes. Last month we published 'Tibet's Sacrifice: Exiled Lives', an interactive comic about self-immolation among Tibetan activists in India. The comic was picked up by Tsering Woeser and translated into Chinese,and caught the eye of Chinese censors. The result: Cartoon Movement is no longer accessible in mainland China.

The Election Committee (EC) in Malaysia has decided to ban caricatures during the next election, because the last elections saw 'too many examples of inappropriate political caricatures'. Well-known cartoonist Zunar plan to fight the ban, calling it 'comical and ludricous'.

From June 23 until September 23, the Cartoon Art Museum in San Francisco will feature the artwork of Susie Cagle in Small Press Spotlight, an ongoing exhibition giving attention to talented individuals  in alternative and small-press comics.

Sherif Arafa was nominated for the Arab Journalism Awards 2012, in the category Outstanding Cartoon Work.