This Wednesday we'll publish "Tibet's Sacrifice: Exiled Lives" by Dan Carino, a multimedia piece of comics journalism examining Tibetan activists living in India and their willingness to die for their cause through self-immolation.

Self-immolation among Tibetan activists has been on the rise over the last few years with TIME Magazine naming it the #1 underreported story of 2011. In New Delhi, India, Carino interviewed activist Shibayan Raha, who was arrested in 2007 for attempting to self-immolate, and visited the refugee settlement Majnu Ka Tilla to see why so many Tibetans seem willing to die for their homeland.

"The fact is that self-immolation now transcends Tibet and protesting monks," Carino says.  "Everyday exiled citizens in the diaspora feel so anguished and frustrated with the Chinese process that they are willing to sacrifice their lives for the cause. Meanwhile, Tibetan settlements serve to truly support the welfare of Tibetans born in India and preserve their culture." 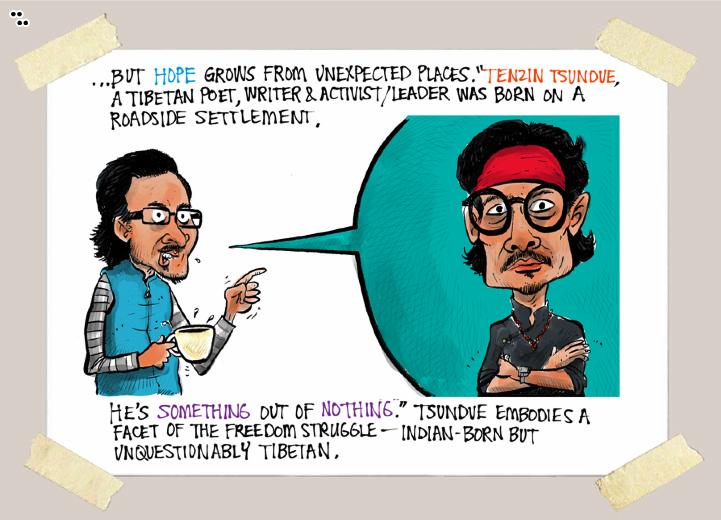 "Tibet's Sacrifice" blends numerous multimedia aspects, including navigation, an audio/visual slideshow, and outside links to supplemental material to contextualize and support the story. "Comics journalism as an emerging field holds a lot of promise," Carino says. "Layering multimedia components seems like a natural progression of the discipline. Ultimately, this approach combines my interests in photojournalism, documentary filmmaking, political cartooning and multimedia production."